Our cruise has come to an end as Queen Elizabeth sailed into the port around 7 AM.  The windows were too wet to get any decent pictures and then we docked against an ugly terminal building.

COVID NOTE.  People going on to Vancouver are being antigen-tested today so the cruise itself is not being terminated - those who were positive and close contacts are the ones disembarking in San Pedro (Los Angeles).  I am convinced that keeping those folks on board for two more days would seriously be a resource drain on both Room Service and the Pursers Office.  The ship tried to keep up but couldn't handle it.

Our room service breakfast arrived on time at 7 AM.  I had Rice Krispies (no banana – CA agriculture rules) and some scrambled eggs, which came cold again.  I did have some of the breakfast bakery goodies.  The coffee again was cold.  No solution for that.  Ellen had eggs over easy and some porridge.

We are scheduled to be escorted off the ship by housekeeping and that should happen around 10:30 AM or so.  I grabbed all the paperwork regarding disembarkation and housekeeping did come along with the hazmat garbed foggers (one in front and one behind) who escorted us to the gangway.  Although the ship made copies of our passports for immigration, we still had to face an immigration officer in person – he wasn’t afraid of us and chuckled when we asked him about no mask.  Those guys are tough.

There were quite a group of us – mostly older than us and a few younger people including one 20-year-old who must have been in the wrong place at the wrong time to catch COVID.  We were then escorted out to our Group 20 bus (which already had our bags).  Stragglers finally showed up and with somewhere between 30 and 40 passengers (all COVID brothers and sisters) our bus headed out.  I did not get any pictures of Queen Elizabeth during this cruise but I just caught a glimpse of her aft section from the bus as we were leaving the port. 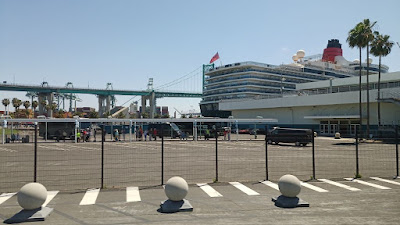 As would be expected, everyone on the bus was masked (there was no way to tell who had recovered due to the timing of testing).

It was a short ride to the San Pedro Doubletree Inn by Hilton – you can see the port and the marina from the hotel.  We had the first two seats in the bus (our training) so we were first in line to check in.  We got our room number – 346 – and printed lunch and dinner menus. We saw our bags go into the hotel and were told that they would be delivered to our rooms.  The hotel is very nice – actually a resort – and our room in the isolation wing is the second to last on the floor and has two queen beds and a lovely view of the marina and the port in the distance.  While we are still recovering from COVID, twin Queen beds seems like the best configuration.

We got specific instruction via email from shoresidesupport.com that stated that any guest leaving the hotel prior to completion of isolation would get one warning - a second violation would result in that person being booted from the hotel and any support from Cunard discontinued.  Since I was diagnosed on 5/28/22 (Day 0), I would complete my five day CDC mandated isolation on 6/3/22.   But, I could not travel until 6/8/22 or 10 days post diagnosis.  CDC guidelines indicate that the majority of COVID folks are no longer infectious at that point (even though they may still be PCR positive).

The way it works operationally is that you cannot leave the room at all during the five day isolation period.  All meals are ordered off the daily printed menus.  Turns out there are no veggie items on the menus so Ellen spoke to the desk and they added a veggie burger to the lunch menu and will modify the dinner items to remove meat when possible.  Depending on the time of day, they are very understaffed here so you spend an awful lot of time on hold – I am trained in being on hold – but at least, America is not singing about "alligators in the air"

The food has been coming on time; the staff leaves the food in bags outside the door and departs.  Respect.  The veggie burger was huge – bigger than commercial Beyond or Impossible burgers with a pound of fries. Ellen had a grilled cheese sandwich – we both had Diet Pepsis.  The food was very good – almost gourmet.  I found out later that the burger is a "Beyond Burger" but a bit different than the ones I have at home - it is much larger, doesn't smell, and tastes very good.  It comes with a metric ton of fries, which are also very good.

The days are long – nothing on the TV and I am too pooped to read.  Concentrating has been difficult.

So I am scanning Facebook and Google and my news apps.

For dinner, I ordered the Cajun Pappardelle and Ellen ordered the Salmon Piccata.  My dish came with chicken even though I ordered it without the meat.  The kitchen said they would make it over.  We also got the bill – this place is not a Burger King – each of those entrees were $32.60; the Diet Pepsi was $3 and there was a tip added on.  We have a $100 per diem so we can handle the standard meals.  The revamped Pappardelle was absolutely wonderful – I could only finish about half – it was pretty tangy but delicious.  Probably, the best food item since we left for our cruise weeks ago.  Nothing on the ship matched this dish.

I have not heard from shortsidesupport.com in the UK – they are eight hours ahead and should be into early Tuesday morning.

The room is quiet and there are no seas.