It's a beautiful day outside.  Blue skies and blue waters. 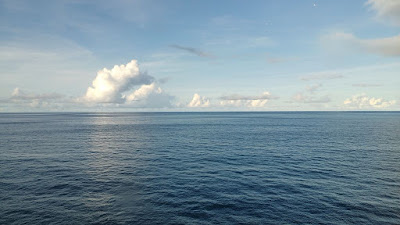 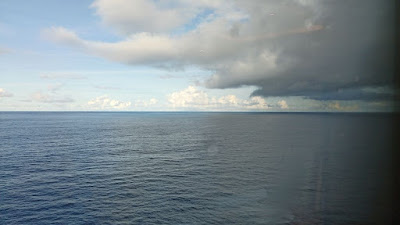 Went up to the Lido Café for breakfast and grabbed the last table near the entrance.  I pushed the table back a few feet to increase separation and headed off to get my food.  I told one of the suits I need salt and he said he would bring it to me.

When I got back to the table with my food, the table was back to its original position.  I was only trying to be safe and protect others.

Today, it was waffles, cottage cheese, jams, and scrambled eggs.  I also had a grapefruit half.  The food was certainly familiar and good.  The only issue is getting coffee refills.  There were more suits in the Café today and fewer servers.  I had to get my own refills because the only server in my area got into a conversation with a chatty Brit.  I did not stay any longer up   than I had to.  I gathered Ellen’s breakfast items and went back to the room.  By the time I left, no one was sitting next to me upstairs.

Ellen is not feeling well – an intermittent fever, sort throat, and congestion.  Not COVID because a) we have stayed away from everyone and stay mainly outside, and b) she tested NEGATIVE less than 24 hours ago.  Maybe a sinus infection.  We’ll go with Tylenol for now and then start on antibiotics if we need to.  She’s going to hang out in the room this morning and rest.  I am in the Café Carinthia enjoying my iced skinny decaf latte at 10:15 AM. 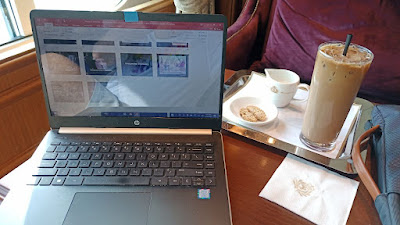 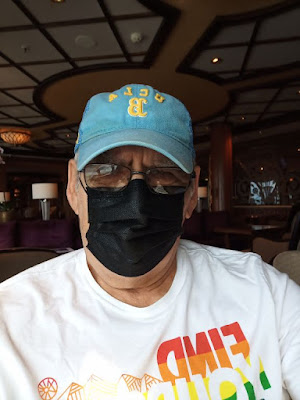 Ellen decided to call the Med Center about her symptoms and they said they would send someone right down to do some testing.  The first person came and tested her for the flu; a few minutes later another nurse came in full PPP to test her for COVID via PCR and then left and came back to test me for COVID.

I certainly did not trust that comment so we kept calling and finally around 3 PM or so, Ellen called to find out that she had tested POSITIVE for COVID and I had tested NEGATIVE (but was a close contact – oh really?).  They spoke to her first and told her she would be moved to an isolation room with a balcony and that someone would come to get her.  I was told that I would have to be tested daily for 5 days and be negative to be released as a contact. I would need to report to ConneXions 1 (Deck 1 Midships) each morning between 8 and 9 AM.  I was also told that I could not eat in the dining rooms or buffets and that I was going to be ordering from room service or menu provided for me.  I could however, wander masked around the ship as long as I did not engage in any activity that involved removing my mask. I was also cleared by the Med Center for my next lecture based on the distance between me and the audience – I would have to continue to test negative.

Ellen had to mask up and wait for Housekeeping to move her. 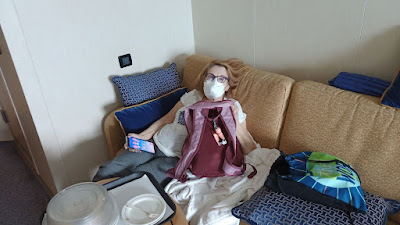 It took several hours and a lot of noise from me at the Purser’s Desk to finally get Ellen to her new room – 4149 – a veranda cabin on Deck Four Aft.  She took her meds and just a few clothes.  I then went through a protracted negotiation to have my room sanitized – initially, they were going to fog the room late tonight or tomorrow morning.  Finally, I spoke to Lucy, our room attendant and she said she would check with her supervisor to see what to do.  While that was going on I ordered dinner from room service – a Cesar salad and Mac and Cheese – the salad was OK but I did not really eat the Mac and Cheese. 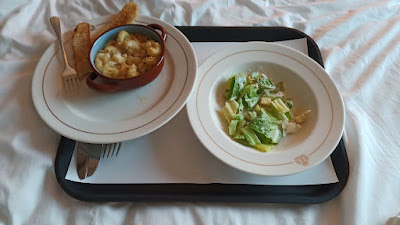 I snuck upstairs to the Lido and walked off with a mini dessert – strawberry compote – which I ate on Deck 3 on the lounge chairs.  The mask stayed on the whole time and my time up there was less than one minute.  I needed an antidote for the Mac and Cheese.  This is my new normal. 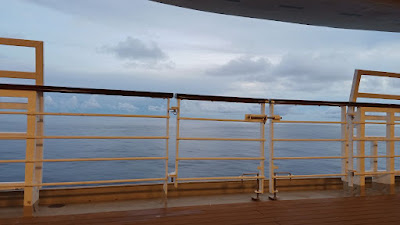 Ellen got settled in her room and I asked the Purser to send up her antibiotics for her sinus infection.  She is taking Tylenol – she does not have the aches and pains and breathing issues normally associated with COVID – We are both double vaxxed and doubled boosted (six weeks ago).  I still don’t have any symptoms.

It was formal night tonight and I was in baseball cap, shorts, and t-shirt so not really ready to be seen.  The show tonight was “Hollywood Nights” – a tribute to songs from the movies.  I walked by the theater and heard “Skyfall” so the James Bond marathon continues.

Lucy got my room ready about 9 PM and I was able to finally settle down after wandering around the ship in my mask – the outside lounges were taken away earlier so I had few places to go.  I am a little peeved in that Ellen and I obviously got exposed even though we have done everything we can to distance ourselves from other guests – while dining or in the show.  The peeving continued when I saw guests walking around with noses sticking out and even a couple of entitled passengers totally mask-less.  Queen Elizabeth has done everything it can to make it clear how important proper masking is and the human factor continues to get in the way.  I will never understand it but some people are clearly playing for Team COVID.

There was another message from the ship that tomorrow there will be another ship wide antigen screening.  This would be the third one in about five days – I guess a lot of people evaded testing two days ago and wound up positive or people testing negative are now positive. Something is going on and the ship has decided to test until they get to the truth.

Tomorrow’s events include both Jay and the Bob Sled team guy – doubt I will make either.  The Show tonight features a magician so I am pretty sure I won’t make that show either but you never know.  The other bit of news is that because of the rising COVID cases on board, all the launderettes have been closed.

I read some more of “Diablo Mesa” in my newly cleaned room and called it a crazy day at 10:30 PM.  A little early for me but this day had to end.