A humid and hot day in the Turks and Cacos Islands.  This is a Maiden Stop for Queen Elizabeth – the Queens are rarely in the Caribbean.  I guess an honorary plate will appear in the hallway making this occasion. We are here alongside the Carnival Freedom, a ship in dire need of a facelift.  When the Freedom pulled in, the gangways were closed for safety reasons – we have seen that done before, mainly in Costa Maya where ships are docked side by side.

I went up a little later this morning hoping that guests would already have eaten and would be on their way off the ship.  No such luck – the Lido Café was crowded.  I went to the shady side of the ship where there was no one.  In a few minutes, I was surrounded by people.  I simply don’t understand why people need to cluster like that when 99 percent of the room is empty.  I ate quickly and departed.  BTW, the meal remains the same simply because it is so good – waffle and scrambled eggs.  I do like those little jams in their cute little jars.

I am making progress on “Old Black Magic”, Ace Atkins take on Robert B Parker’s Spenser.  This is the second Spenser book in a row that I’m reading and they are both about art theft.  Just getting used to Atkin’s Spenser – maybe a little less snarky and his banter with Susan Silverman is not as witty, but it is definitely a Spenser novel.

We had lunch in the Lido Café on the side facing the Freedom – the cooler and less crowded side.  Today, I had a salad with Ranch (the main dressing).  I also had some spinach manicotti (very good) and a slice of their Margherita Pizza (which was really good and nothing like the Frankenpizza thing I created the other night).

When I got to the table, Ellen was chatting with Jenene Caramielo, who, when not glammed up for her shows, looks just like a passenger.  We spent most of the lunch talking with her and finding out how similar our situations are (Guest Entertainer and Guest Lecturer).  She said she is going to take some months off to see the country in an RV with her husband and two dogs.  She told us that she moved to South Florida to get away from the cold of Pittsburgh and to have easy access to cruise ships.  So, now South Florida is too hot for her.  I told her she needed to move to San Diego.  It was great talking to her.

Spenser and I spent the afternoon together on the open deck – watching the blue green water and the beach goers. 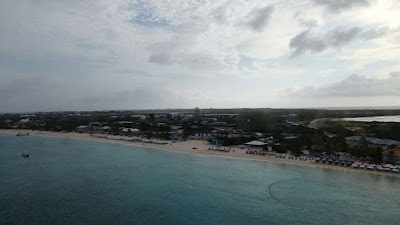 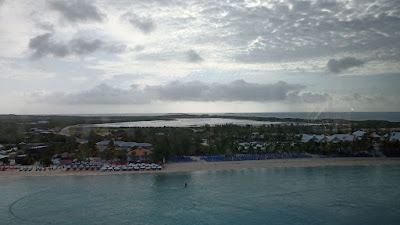 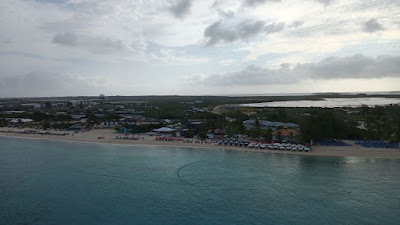 I also got a very nice panoramic shot of Grand Turk.

There was a terrific breeze that kept things cool and provided Caribbean fresh air.  We watched the early sail away from Deck 3.  The ship just backed out and skirted around to the starboard side and off we went.

We had dinner in the Britannia Dining Room.  I had a salad, gumbo soup, and a Chinese veggie dish (good but way too spicy).  I don’t remember what Ellen had.

Dinner turned out to be very fast so we had time to go to the Queens Room for the pre-show set – “The Watson Duo” sang songs of the 50s through today with quite a few Dusty Springfield numbers and “The Tennessee Waltz” by Anne Murray.  They were very good. 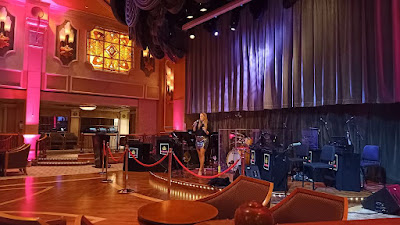 Tonight’s entertainment in the Royal Court Theater was the Second Production Show. “The Outsider” – a fantasy story incorporating current songs (like “Here Comes the Sun”) – hard to follow but the music and dancing were OK.  We got there late and sat in the back row of the balcony – with all of the protective plastic barriers up there, you really can’t see anything. What was extremely strange was that the play just ended – no one from the Entertainment Department was there asking for another round of applause and commenting on anything.  The audience didn’t really know if they should leave or if something was yet to happen.  In a few minutes, everyone just left.  It’s the first time that we have seen something like this.