Had the best night in a long time – I don’t believe I coughed last night (I did not take the cough medicine).

Ordered pancakes and eggs for both of us and it was very good again.  Perfectly cooked and hot on arrival.

We were informed by Reuben – the man in charge – that, if we completed our isolation, we could go down to the restaurant and order off the menu.  So that’s what we did for lunch.

It was a little warm on the patio, so we ate at a table in the corner – I am still trying to be careful and wear masks around people.  The scientific consensus on behavior once out of isolation is not yet there so I decided to err on the side of caution.

I had a Beyond Burger and Ellen had a tuna melt for lunch.  They were both as good as the items brought to the room but it was nice to be in a different environment for lunch.

We stayed down in the dining room on the remotely located couches until the shade appeared on the couches outside.

While out there, we met another couple from Queen Elizabeth, who also completed their isolation and were having lunch on the patio.  They told us there were other hotels in the area that also were housing guests from the ship.  So this has been quite an effort for Cunard and they have done a terrific job of keeping things safe and organized.

While we were chatting with the couple - they were from the UK - a group of Ospreys (vertical takeoff planes) flew over - I tried to get a photo but they were too fast - that dark dot in the center of this picture is an Osprey. 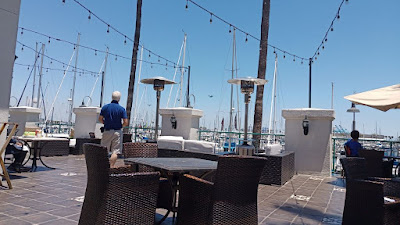 We decided to walk down the path fronting the Marina.  I got an iconic - not at sea - picture of Ellen against the railing. 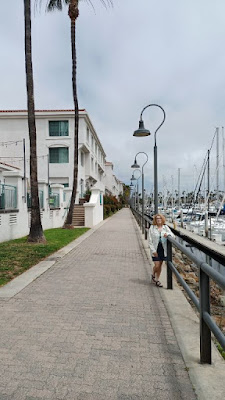 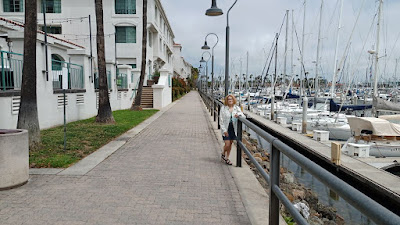 While out there, I received an email from Metro Services regarding our pickup on June 8 to LAX – they are coming at 1:30 PM, which is perfect timing for our flights later in the afternoon.

Late in the afternoon, we watched the Navigator of the Seas depart for its four-day voyage to Catalina and Mexico. 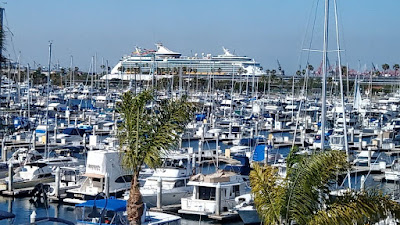 It may be the only ship currently using the San Pedro Port.

For dinner, we were back in the dining room and I got Pete’s Fish and Chips, which were really good, and Ellen got the Salmon Piccata, which was a bit saltier than the room version (I tried to help by help by eating the capers on top of the fish).  We got some cookies from our terrific waiter, Chuck, to take back to the room.

As I said earlier, isolation has been all about the Women’s College Softball Playoffs – the girls are fun to watch – a lot of skill (I could never even foul tip a softball fast pitch). They seem to have a good time in good or bad times.  Although, there was a lot of crying when Texas beat OK State to go to the Finals against Oklahoma.

There is nothing on this Cable System so a little reading at the end of the evening.