Slept in two shifts – got up in the middle of the night and then finished off shift 2.  Got up a little later than usual and went up to the Lido Café closer to 8 AM.  I did this to allow guests to get their breakfasts and then empty out the place on their way to excursions.  That didn’t work out all that well since the place was still full when I got up there.  I still haven’t been able to get fried eggs so today, it’s pancakes (that came out of a drawer) and scrambled eggs – I shook things up by getting some porridge (AKA oatmeal) with brown sugar.

We have not been getting off at the ports but today we decided to walk to the downtown area to get some bottled water at the supermarket.  It was hot and humid and the walk to get out of the port area was quite a hike.  We are docked here with the Explorer of the Seas and the Scientology Ship, Freewinds. 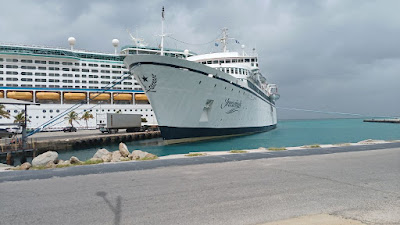 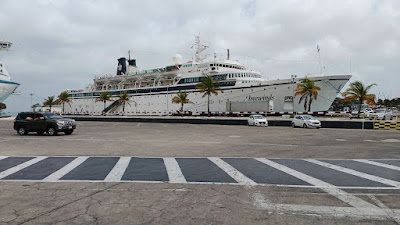 I was saddened by the look of the port area of Oranjestad. 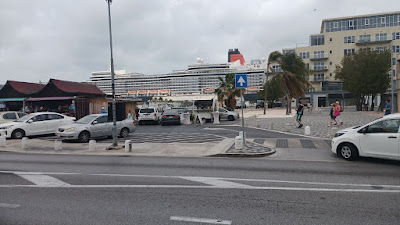 In our past visits – pre-COVID – the downtown area had fancy stores and nice restaurants and even spas.  Today, shops were shuttered, and the area looked in disrepair with weeds growing out of the pavers.

I did get a picture of an installation - a Blue Horse - as we made our way through the town.  We did not run into any more blue horses during our walk - I thought the horses were part of some festival.  Will never know. 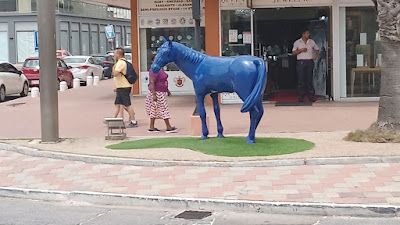 We walked into a couple of souvenir shops – Ellen found some butterflies for the house.  We did finally find a Supermercado where we bought six large bottles of water ($1 each) to take back to the ship.  The walk back seemed endless but we did make it – I had 6000 steps on my watch before lunch.  We both wore masks in all the stores - locals were not wearing masks.

After dropping off the water we went up to the Lido Café for lunch.  I ordered a Grolsch Beer 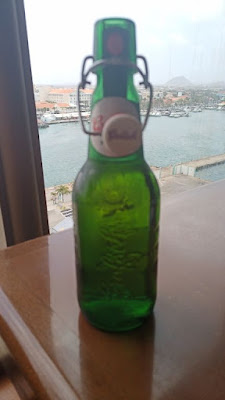 and a Diet Pepsi – the beer was good. For lunch today, I had a salad with Balsamic Dressing (the dressing was pretty good), some potato salad, and a cheese pizza that we shared.  The pizza was OK and the salad was OK too.  Best of all was the beer – I had never had this brand of beer and I really liked it.  All beer tastes terrific when you’re hot and sweaty.

We went out on Deck 3 for a while but it was too hot so we found a place near the library that was A/Cd and had a view of the city and 4G phone signal. 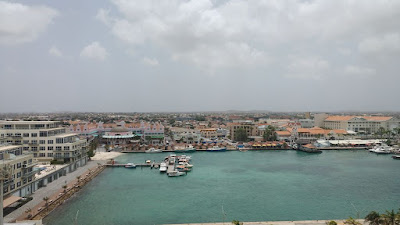 I read more of my Spenser novel but mostly caught up with Facebook and emails.  I also posted a comment on Jenene Caramelio’s FB Page telling her how much we enjoyed meeting her and attending her shows.

The crew was also checking out the life crafts - several of them were sailing around the ship.  Probably a good idea to put them in the water every so often and see how they function. 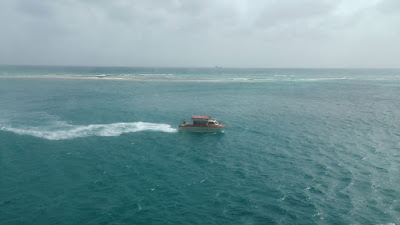 I tried to find John to give him some receipts but he wasn’t in the office. Plan B involved working with a nice woman at the Purser’s Desk to email John the receipts along with a hard copy.  She also made me a hard copy of the receipts.  She did a nice job of handling the issue.  The Purser’s Desk has been very helpful throughout the cruise.  They also revealed that a few passengers had tested positive yesterday and were in isolation.  They also confirmed that we were sailing with only 1300 passengers (out of 2081 capacity).

Back in the room live now – 5:17 PM and taking advantage of the AC.

We pre-ordered two items for tonight’s dinner in the Britannia Dining Room.  Mushroom Soup (off the veggie menu) (much thicker and darker than the standard soup we had a couple of days ago but very good).  We also both had specially prepared spaghetti with pesto sauce.  It came with pine nuts and garlic but a cup short of pesto sauce.  It was more like a oglio but it was still good in its own way.  I doubt we will be able to do that again – the Maitre D seems to imply that it would be a one off.  I also had a little salad with 1000 island.  We did not have dessert but did have the chocolate brownie petite fours and tea and coffee.  It was a good meal overall.  We did not see anything on either of the menus for tomorrow so we will need to fend for ourselves up in the Lido Café.

As we passed by the Grand Lobby, I took a picture of Ellen on the stairs across the way.  Turned out to be a spectacular photo. 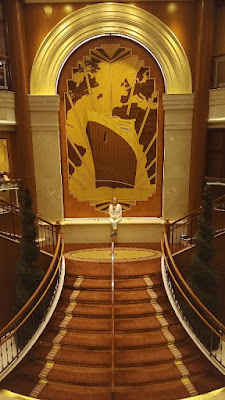 I also got a nice picture of the elegant Deck 2 - Home to the Queen's Room and the Pub. 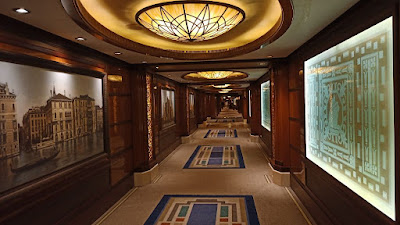 before we took in the Everglow Duo in the Queen’s Room after dinner.  We decided not to go to the show tonight, featuring violinist “Gary Lovini” aka “The King of Strings”.  Instead, we went to the Library to read and enjoy the quiet.  We finished up the evening in the Commodore Room listening to Jacqueline Waugh sing her sad songs.  The Commodore Room is set up so that it is difficult to establish any distance between tables.  We did find some seats away from people.

The ship is very cold tonight but our room is just right.