With the clock change, I woke up very early – around 5 AM and could already see the ships lining up to enter the Canal.  As a passenger ship, Queen Elizabeth probably got priority and was able avoid the queue.  I kind of hung out until it was time to go up and get breakfast.

As expected, the Lido Café was already pretty full with everyone looking for a window seat to see the transit.  I did find a seat away from the windows and other people.  I had a waffle with cottage cheese and jam along with some scrambled eggs (sound familiar?) and while I was putting that away, Ellen came up a joined me for breakfast.  She had them make her an omelet (mushrooms and cheese).

The Canal Speaker – Andrew Roberts – did the play by play announcements from the Navigational Bridge.  We entered the Gatun Locks around 8:30 AM and exited the Miraflores Locks around 5 PM.  The ride was very scenic and there was no rain at all.  We watched from several locations around the ship.  It wasn’t too hot and we were outside for a bit of it but there were too many people hanging over the railings so we went back inside. The pictures from the transit are shown below. 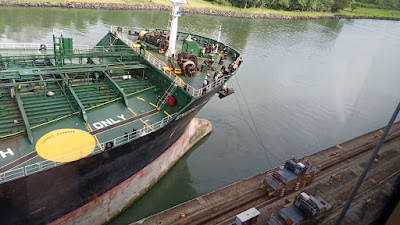 Even though this is Transit Day, I am scheduled to give my “Forensic Detectives: The Search for Jack the Ripper” presentation in the Royal Court Theater at 11:00 AM.  While I am giving the talk, the ship will be makings it slow trek across Gatun Lake but still, I am expecting an audience drain today. The turnout was OK – certainly in excess of 100 guests (people were in the boxes and in the balcony).  One guest said that a lot of people are watching the live broadcast on television.  I made some changes to the talk (added the Openshaw Letter to my Ripper Letter section).  The talk ended right on the button at 11:45 PM to good applause and feedback.

Jay followed me with a talk about sharks.

We went to lunch in the Lido Café.  I was about to have the taco constructed for me when Ellen said we should check out the buffet.  Turns out they had Fish and Chips.  I asked for tartar sauce but what I got was something else.  Still, the fish and chips were as good if not better than what is served at the Golden Lion Pub.  I had a Grolsch and Ellen had a Diet Pepsi to accompany the food. 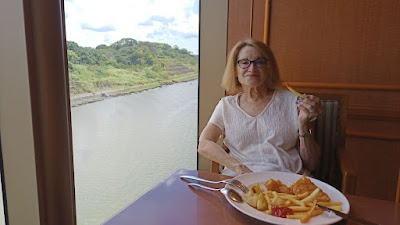 Spent some time in our cool room before setting out for dinner in the Lido Café.  We were going to try a host of items from the vegetarian menu but decided it was too much trouble.  Turned out to be good call.  Tonight was Asian Night in the Café and I had the chef make me a custom stir fry – free of any sea critters and oyster sauce – and using a new wok.  I had noodles, onions, bok choy, peppers, and soy sauce prepared perfectly.  This was the best dish I have had so far on this cruise and one of the best freshly prepared items on any cruise.  The noodles were perfect and the taste was on the nose.  Delicious.

Along with the stir fry, I had the veggie spring rolls and some potato salad (which, by the way, is really good on this ship).

We passed on the Show tonight, “The Power of Two”, featuring an acrobatic couple (Ilia and Oksana).  We’ve see this show before and opted out.  I think this is the couple that I tried to take a picture of on another ship years ago and one of their entourage said I couldn't  (I managed to get one anyhow).

Instead, we went to the Garden Room to read – we stayed through “The Wipe Out Trivia” and left before the music trivia.  Next time we are going to stay because it looked like the singers from the troupe sing the clues.

Again, the cool and calm of the room was good.  We ordered some dessert (apple pie) and decaf coffee from Room Service.  Both good.

Seas are smooth.  We are, after all, in the Pacific Ocean.