Did not get much sleep last night – a combination of the time change, something I had to eat during the day, and a fantastic lightning storm that went on most of the night.  I did not hear any thunder and the seas were smooth but the storms off the starboard side were spectacular.  I took a picture around 5 AM.  At this point, I am live at 7:34 AM in the cabin having been up since 4:30 AM.  A price will be paid later today.

We, of course, are not getting off today.  Puntarenas, located on the Gulf of Nicoya, has the longest pier of just about any of the ports we have gone to.  Here's a look from Google Maps.

Queen Elizabeth is the only ship here today.  There is a shuttle that runs people from the ships to the end of the pier.

I did get some pictures of Puntarenas from the ship. 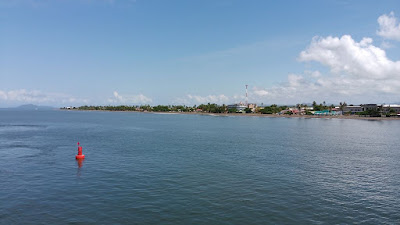 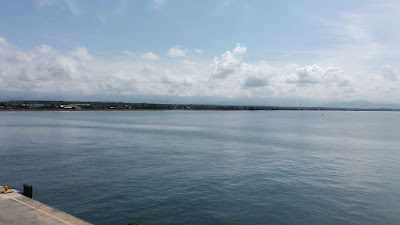 I also got a pretty nice panoramic shot of Puntarenas.

We went to the Britannia Dining Room for breakfast today – the first time this cruise.  We both had pancakes with Nutella, bananas, and pecans and two eggs over medium.  I also had a grapefruit half and some oatmeal.  The breakfast was very good and the service as well.

A little bit of reading on the open deck and then it was time for lunch.

I went out to the Lido Pool Grille and ordered a veggie bean burger.  I came back in 10 minutes to pick it up - the burger came with a jalapeno bun and a side of guacamole and “salsa” and was served on a super fancy square plate – I had some fries with that but ate very few of them.  Ellen had some tuna and egg salad mixed together.  I might get that bean burger again before the cruise is over.  On other ships, the grill is very popular with long lines waiting for burgers.  A guy in front of me got some kind of meat and then there was me and no one behind me in line.

Most of the day was spent inside in the Carinthia Café area because it was quite warm outside and not much breeze.  We downloaded books and I have started a new book by Preston and Childs called “Diablo Mesa”.  The novel features archeologist Nora Kelley and a character based on Elon Musk.  It has to do with the UFO crash in Roswell NM.  We watched people come and go and near the end of the day, it appeared that some new guests were coming on board the QE.  What was interesting was that their bags were fogged with antiseptic solution before being allowed on board.  Earlier in the day, we asked why so many of the tables in the Café had “Do Not Sit Here” signs and were told that the Café had been disinfected and the seats were still wet.  Interesting.

After checking out the options on the Britannia Dining Room menu, we went to the Lido Café for Dinner.  I had the chef make us a cheese pizza with garlic and I had a salad with Thousand Island Dressing (a rare visitor to the salad bar).  I had three pieces of pizza and felt bad about leaving half a pizza – next time, I’ll order a half pizza.  Ellen had rice pudding for dessert and got one of the waiters to bring her some raisins.

After dinner, we went to hear the Watson Duo in the Golden Lion Pub.  The last time we heard them in the Queen’s Room, they did a rock and roll set.

Before they got started, the Captain came on the PA – ship wide – to indicate that COVID cases on the ship were on the increase and reinforced the mitigation procedures on the ship – mask wearing indoors and hand washing.  I suspect that another round of all guest testing will be coming soon.  I think poor mask wearing, no masks while eating and drinking, and carelessness off ship are mainly responsible for the increase in cases on board. BTW, the Captain did project the gravitas needed to get the critical nature of the situation across (there was also a letter in our room restating the situation).  There is too much emphasis on hand washing (even though I have seen quite a few guests ignore the sanitizers at the Lido Cafe) and not enough on distancing and proper mask wearing (someone should be wandering around and enforcing the mandate).  Also, if you are sitting in the Dining Room and you are finished eating and drinking but are still chatting, masks should be worn.

Today, the Watson Duo did nothing but ballads, starting off with a great version of “The Rose” by Zoe,

Thomas did “Country Roads”, and Zoe finished the set with “Hallelujah” – done wonderfully.

We came to the Royal Court Theater just as the show was about to begin.  We got seats in the back and distanced as well as possible in the theater layout.  There was a mask monitor on duty but she was not as good as the one the other night because she missed a lot of peekaboo noses.

The headliner tonight was vocalist, Claude-Eric Brunelle, from Montreal.  He was very good knocking out Michael Buble’s “I Feel Good”, a song in French from Charles Aznavor, “Up to Where you Are” by Josh Groban, and finishing up with “Man of La Mancha”.  Very entertaining show.

After the show we went to the room – the last time change wiped me out and Ellen wasn’t feeling all that well.

I did get a nice picture of Puntarenas at night through our cabin window. 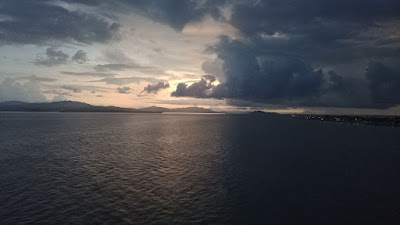 The clocks move FORWARD tonight putting up back on CDT, even though the ship is moving NW up the coast of Central America.

Even though there are storms in the area, the ride is smooth.