Slept poorly and woke up with an Ambien hangover about 5:30 AM – could not get back to sleep. Throat is a bit scratchy and nose is running.

Breakfast came a few minutes before 7 AM – today I had Muesli (good), two scrambled eggs, a toasted bagel, and some baked goods (for later).  The breakfast was good.

At 8:00 AM, I reported to ConneXions 1 for Contact Tracing COVID Testing – there was quite a crowd there but some of the folks were going on tours and were not supposed to be in the testing line.  A little more confusion for this morning.  So many people were gathered in the Deck 1 Lobby that it looked like a super-spreader event.  I got away from there as soon as I was tested.

I am in the cabin now (10:44 AM) awaiting my results – no answer when I called the Med Center.  I did finally reach them and they checked the results and they were NEGATIVE (even though I feel like I have a sinus infection – something I get on a regular basis on a ship).

I spent a little time outside on the deck and it wasn’t as hot as advertised – maybe due to a nice breeze.  There were also some dolphins on the starboard side of the ship so I hustled over there and tried to get some pictures (they were pretty far away). 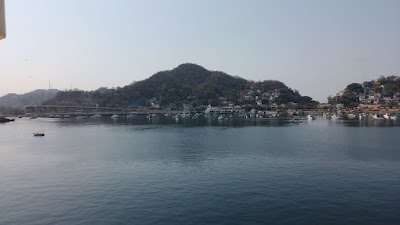 I ordered some fish and chips off the restaurant menu last night and it came – albeit a bit late – and after a call to the Purser.  The Blue Cheese and Tomato tart was a big scary because the cheese was actually a blue color and very pungent.  The fish, however, was really good – a huge perfectly cooked piece and even the tartar sauce, which is a bit wonky was OK.  I just took two bites of the chocolate roulade.

I spent a little more time out on the open deck until it was about 30 minutes to push (4:30 PM).  In addition to her usual discussion about where the ship would be heading and the weather conditions, the Captain told us to be on the lookout for a letter being sent to each cabin.  This is never a good thing.

Lucy brought the letter along with the Programme and Newspaper.  It boils down to this – because of the COVID situation on board, the ship will terminate this voyage in Los Angeles.  People in the middle of their isolation will need to go to hotels to finish up.  It said Cunard would take of everything but we’ll have to see how that will work, especially for us.  I left a message with John Consiglio concerning this.

I let the kids know what was happening and sent an email to Dorine at Compass.

I wasn’t hungry for dinner and just had the muffin with tea and there are two more pastries to eat tonight.

I watched the basketball playoffs until around 10 PM and then I turned the clock back one hour to put us on who know what time.

Lights out around the new 10 PM.

I took two Tylenols and an augmentin before bed.