We arrived in Tampa well ahead of the sunrise.  I got some very nice pictures of Tampa in the pre-dawn hours. 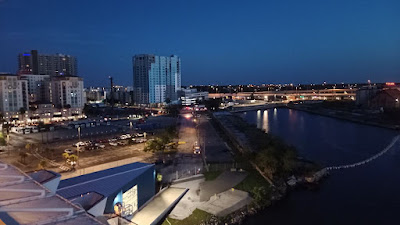 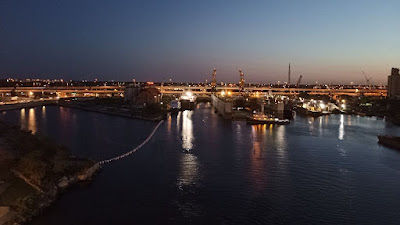 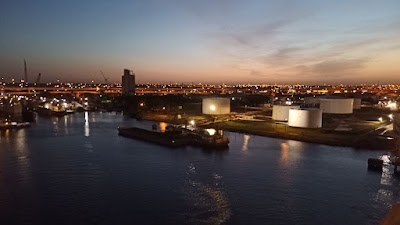 We are in the last group to depart – so we do have some time to get breakfast.  The Oceanview Café was not crowded and we got two seats away from people.  The full breakfast menu was available so for me it was a waffle, cottage cheese, strawberry and marmalade jam (I switched earlier from compote), scrambled eggs, and biscuits. Even on disembarkation day, the food was good.

After breakfast, we waited in the room until our designated assembly time and headed to a less crowded area near the gangway.  It was just a few minutes until our group was called and we existed the ship – our sea pass cards still set off an alarm which made no sense since we were leaving.  We found our bags and got into a long but quickly moving line for passport control.  Our time with the agent was very brief and we were outside the terminal.

After comparing the ship's shuttle, Uber, and taxis, we decided to look for an airport van (historically the most economical transport).  Even though TPA is a fair distance from the Cruise Terminal, the vans were still charging $10 a person; I spoke to one of the van drivers and made sure that they were leaving soon. I got a farewell picture of Constellation before the van's doors closed.  The van left pretty much right away we were at the American Terminal in about 30 minutes – we wore masks during the ride – others didn’t. 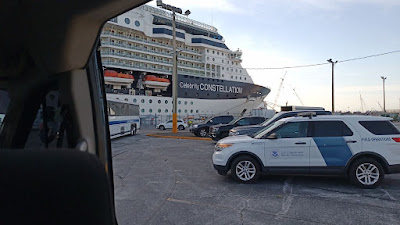 Our flight – AA2920 -  wasn’t leaving until 2:04 PM so we had a lot of time at the airport.  We originally found seats near an Illy coffee shop.  I have liked Illy Coffee since I first had it in Europe so I ordered a white mocha plus a cup of ice – that’s how I make an iced mocha, which costs more than a regular mocha. 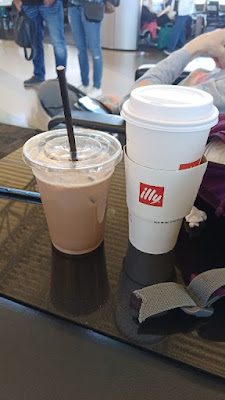 The coffee was delicious.

The traffic around the coffee stand started to get to the point where we felt uncomfortable - I guess passengers were arriving for their flights and started to pack the place.  We moved to a more deserted area near our gate where we had some breathing room (pun intended).   The spot was perfect for taking a picture of TPA's runways. 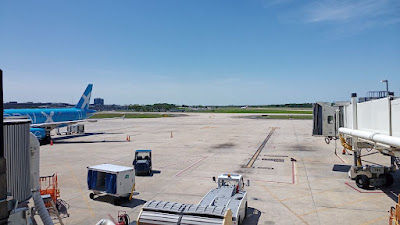 Around noon, I bought the obligatory airport diet coke and we had the lox sandwiches Ellen had prepared from the stuff from the ship.   I also had jalapeno parmesan pretzels that we brought with us and didn't finish.  Perfect.

Our plane arrived at the gate well before boarding. 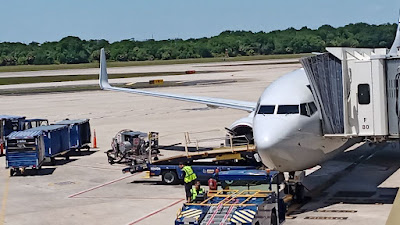 We boarded on time but there was a mechanical issue and the departure was delayed making me regret the coffee I had purchased earlier.  While we were waiting, I asked the flight attendant if I could use the washrooms in First Class (they were closer) and she said OK.  I was in the bathroom when the plane pushed and started rolling – I’m sure that isn’t a good thing - and probably in violation of FAA regulations - but I was not the only passenger in that situation.  I got back to my seat and, after a further delay (I figured we had lost our takeoff slot due to our first delay), the plane finally took off – maybe 30 minutes late.  I had purchased Cabin Extra Seats 16C and 16D (exit rows) so the flight home would be more comfortable.  The coffee haunted me for the entire flight (I had to make another dash to the washroom while the plane was still making its way to cruising altitude).  Still, the coffee was delicious.

The flight was smooth for the most part and soon we were back in dreary Chicago arriving near the 4:02 Arrival Time.  Our cab took a little while to get to 3G and we were on our way home – the driver did wear a mask when he saw that we were wearing one.

Good to be home despite the cold and gray.