Slept like a rock – got up once for 22 steps worth – and finally got up for good at around 7:00 AM.  I was up in the Lido Café when the line was about to open.  It took a week, but I did get my fried eggs over medium along with two pancakes (both with “Golden Syrup” and one with blueberry compote and the other with Nutella spread and walnuts). 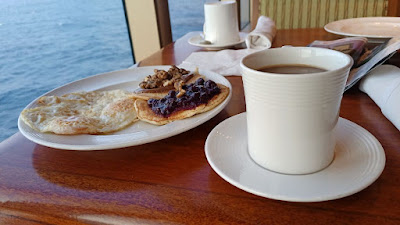 They were good I had to wait for the pancakes, so the eggs got cold.  I’ve tried several ways to coordinate the completion of the various components of my breakfast but with little success. Will continue to work on the logistics.

The weather looks a bit iffy outside - maybe rain on the way. 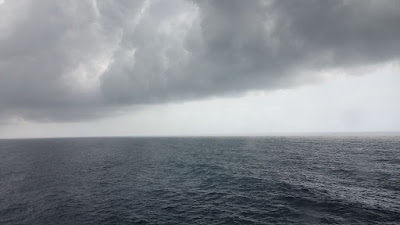 The prediction was good as a check of Deck 9 Aft indicated that it was now coming down. 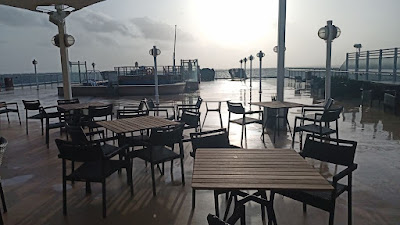 It seems that we have picked up a new Captain - probably was either on the ship the whole time or came on board in Aruba.  She is Inger Klein Thorhauge 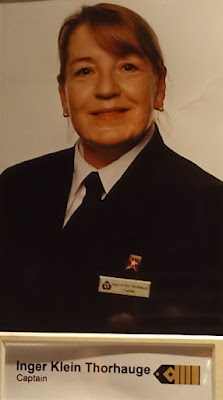 and she is quite the celebrity as she is slated to be the Master of the new ship, the Queen Anne, when she launches sometime in 2024.

A day of reading and snoozing on the breezy open decks.  I finally finished the Spenser Novel – “Old Black Magic” – (a semi-surprise ending) but an OK book.  I started reading one of my Free Booksy Kindle Books (the protagonist is a half Navajo female private investigator who gets involved in crimes related to Biblical Events (the days of Creation and The Shroud of Turin).  The books were kind of simple and it was clear that these were religious books disguised as mysteries.  Adios to Amari Johnston – Navajo Bible Detective. I'm sticking with real library books from now on.

At our last port, I downloaded two more Spenser Novels and I started “Someone to Watch Over Me” (I guess the new author likes classic songs).  It’s good so far – Spenser is still snarky but seems bigger and tougher in these books.  He has an apprentice – Mattie – in this one, who is as snarky as he is and she’s only 22.  Hawk is in this one and so far he is definitely Hawk.

We had lunch in the Britannia Dining Room mainly because there was Linguini and Salmon on the menu along with Shakshuka.  Had to give it a try - it was OK but the Shakshuka was just like any other version I have had since we were in Israel (not including the one that Rebecca makes) - UNUSUAL (I don't believe there was an egg in the ship's version). 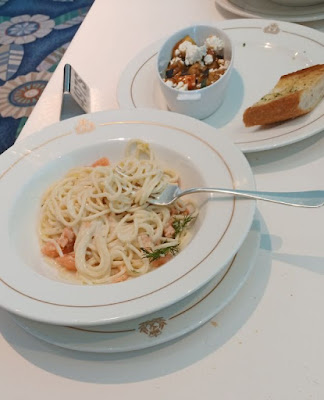 We spent a little time in the afternoon in the Garden Room.  I ordered a Mai Tai and it was a Mai Tai all right but it was served in a tiny glass and was the priciest cocktail so far on the ship.  We stayed for the trivia contest.

Tonight is the second Formal Night and the theme is “Black and White”.  We debated dressing up but since we wanted to see the show tonight, we did get into our duds but no jacket for me.

We had dinner up in the Lido Café.  I had the pizza guy make us a cheese pizza with garlic and it turned out to be quite good.  So much better than the fully loaded concoction I had the other night.  The buffet was also preparing Greek Salads to order so I had one made without lettuce (just tomatoes, onions, peppers, and feta cheese) and used the balsamic dressing instead of whatever they were using in the line.  It was actually pretty close to a Greek Salad.

The Second Production Show – “Palladium” – was advertised to be a reliving of the days of the Palladium Theater. 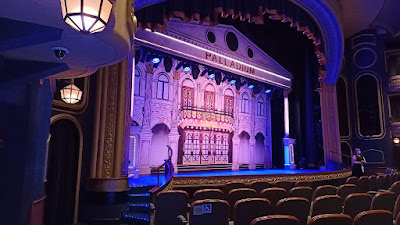 We got very good seats – about two rows into the second section of seats on the left side (right by the sneak out exit).  No one in front of us because while the end of the row in front of us is open the seat next to it was blocked.  So disappointed that no photography is allowed because I could have taken super pictures.  Cunard is missing out on free publicity by not allow people to post their pictures.  The mask monitor was very good at this show running up a down the aisles telling people to either put on their mask of where them over their nose (some people just don’t have that section of their brains engaged).  There was only one out an out scofflaw in the crowd and he came in after the show started with this chin mask.  A young guy, who should know better, and with a woman who was wearing her mask correctly.  I am assuming being an idiot is his only defense.  I think the mask prevented him from sticking his finger up his note throughout the show.  There, I’ve vented.

The show was pretty good – showcasing familiar songs (a Barry Manilow Medley, for example) and finishing up with a way too long and too loud medley of James Bond Themes.  The show went 59 minutes, which is much longer than the 40 -45 minutes for these shows in the theater.  The singers are very good and the dancers are certainly lively.  Sometimes, there is just too much going on.  Too much entropy.

We went to the room early.

Clocks move back one hour tonight to put the ship on CDT.