This is a dual purpose trip – we are going to spend a couple of days with Noah and my sibs in LA before boarding the Regent Seven Seas Mariner for a nine-day cruise down the Western Mexican Coast.  I guess the “Masquerade” name refers to the fact that we will be on board on Halloween.

NOTE:  After countless trips using two carry-ons (that we check) and my small rolling computer bag, I have, on the advice of my knowledgeable travel partner, switched to a laptop backpack (which I ordered overnight from Amazon for this trip).  I was skeptical but everything fit (all of the meds and critical items go into the backpack) and it wasn’t overly heavy. I have never used a backpack – even in college – so I guess you are never too old to learn something new.

Because we wanted to get the most time with Noah, I set up an early flight to LA – AA1037 departing ORD at 7:15 AM.  This meant that we would need to be picked up at 5:30 AM and working backward from that, we would have to get up crazy early.  We did get up crazy early and got to the airport about 6:00 AM – about 45 minutes to boarding.  Our plane, an A321, was already at gate H11 (having arrived in Chicago last night).  It is still dark outside. 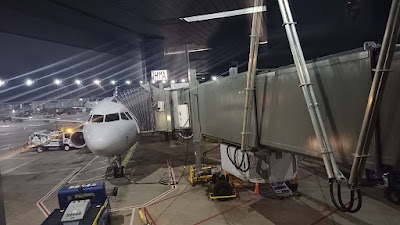 We are in Cabin Extra seats 9E and 9F (middle and window).  The plane was about two thirds full and there were plenty of open seats in the special section.  Ellen asked the flight attendant if she could move to the bulkhead on the port side of the plane.  She did and I stayed on the other side of the plane and both of us had the whole row to ourselves. Super bonus. There weren't many masks on this flight but I did wear mine the whole flight (except when eating or drinking). 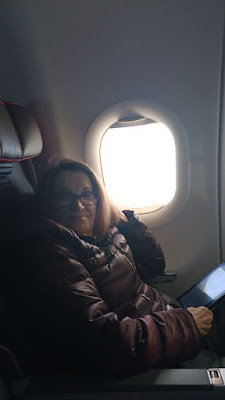 The pilot told us that the flight would be smooth for first hour or so but then we run into moderate chop that would last until we were over Vegas. Something to look forward to.  The plane pushed right on time and was in the air without delay.  The climb out was smooth and the flight was smooth as the captain had indicated.  Of course, we executed the "big bank" to reduce noise effects on the communities below. 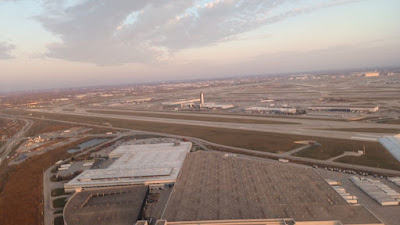 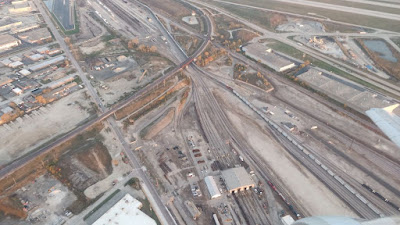 Since we are in Cabin Extra Seats, we are entitled to drinks. Since it is early in the morning, the usual drinks are not really a good idea.  However, getting a couple of Bailey's and putting one into my coffee milk was a good option.  A spike mocha latte you might say.  In any event, it was good and went along fine with the bagels and veggie cream cheese we brought along.

I watched a promotional video on the AA entertainment system and that earned me 30 minutes of internet time (I was actually able to pick up another 30 minutes somehow).  On Flight Aware I could see the storms ahead of the plane and the vector taking us right into the mess.  The pilot has indicated earlier that these storms started at 25000 feet and continued up to 45000 feet so there was no place to go but through.  He could have flown around the storms but that would have delayed our arrival in LA and messed up connections. 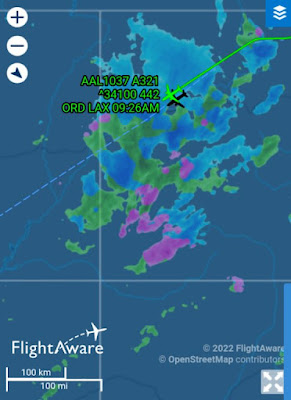 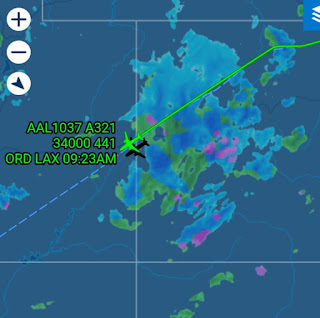 The chop started in clear air but then we were moving through strange layers of clouds – light and dark.  There was moderate chop – and the flight attendants were asked to sit down and buckle up – but it was less intense that I had thought it might be.  The pilot got us through the storms and it was clear skies until LA.

Because the skies were clear after getting through the weather, the view of the terrain was spectacular. 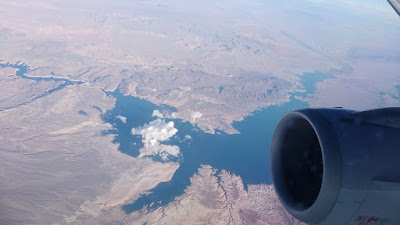 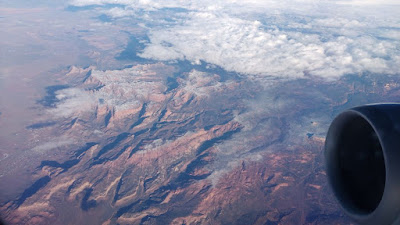 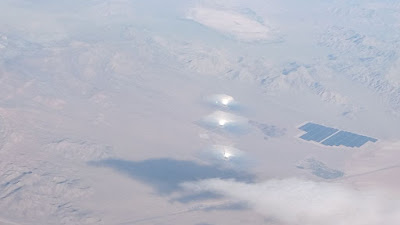 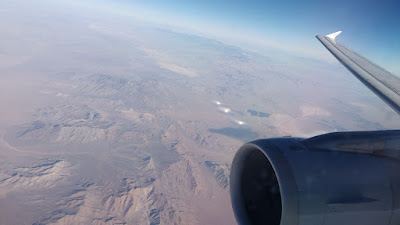 In the dessert - either Nevada or California, I could see a massive solar farm as well as solar reflectors - mirrors that concentrate the Sun's energy to heat water and produce energy. Not sure that's what they were but the mirrors were impressive.

Our approach to LAX was different this time as we did not pass close to the San Gabriel Mountains but were pretty far South.  Visibility was great and I could see the SoFi Stadium and the city itself. 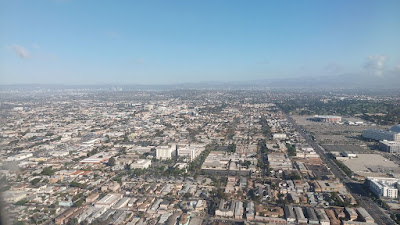 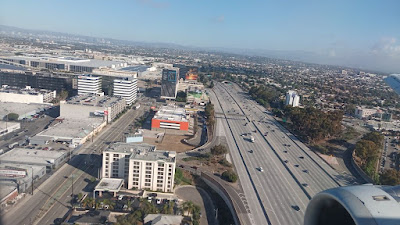 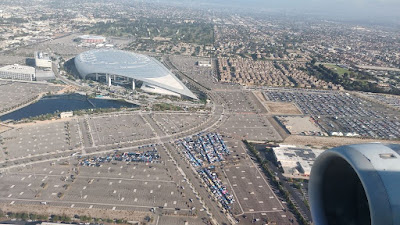 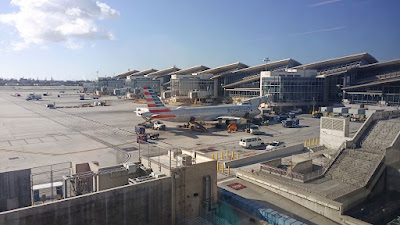 were in the carousel pretty quickly.  We went to the purple sign for Rental Car pickup and the Fox Rental Van arrived within five minutes (a new record).  We rented a Hyundai Elantra (bigger than the Rio or Mirage we booked but at the same price).  It was a little scuffed and had almost 78,000 miles on it but it drove well.

We used GPS to get to Occidental College and Noah’s dorm area.  We found Noah and decided to get lunch at a place he knew in Glendale – Cindy’s.  The place was small and popular so it took a little over 20 minutes to get seated.  Ellen and I shared a very interesting omelet – caramelized onions and blue cheese in the omelet with parsley pesto on top.  Honestly, I did not like the combination of flavors and, while it did come with some kind of odd potato, it only showed up with a single slice of sourdough toast. You can see in the photo below that not all of the omelet was consumed. The place was packed so someone must like this type of food. The service was a little slow but we were there to spend time with Noah and so mission accomplished. 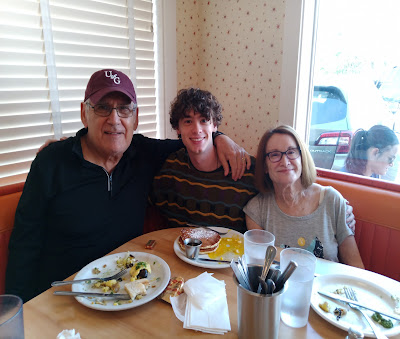 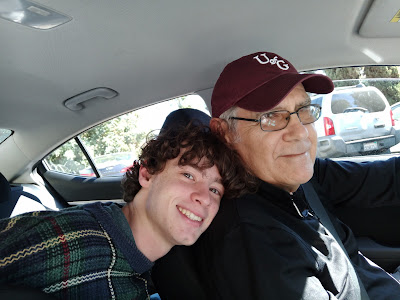 From the restaurant, we went to see Noah’s dorm room.  He has a nice room with a window but the real perk is the common area which has a terrific panoramic view.  His friend, Kyle, was playing Sinatra and we just hung out there a while.  From there we walked down to the Student Center to look for an Oxy cap for Ellen (no luck) and check out the Coffee Shop.  Noah had a Chai Latte and I had an iced Mocha Latte.  All good. 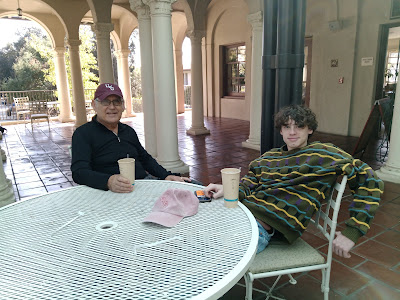 Next, we drove to the Americana Mall in Glendale – I parked the car for free at the Galleria parking lot and we walked across the street to the Americana Mall.  The place was solid people with only a scant few wearing masks.  Still, it was outdoors so and probably safe.  My leg was bothering me so I hung out near the fountains while Ellen and Noah walked and shopped the mall.  It was quite cool and much different than when we were last here in April.

In trying to figure out what to do for dinner, we opted to go with Noah’s suggestion, which was California Pizza Kitchen.  We walked there (maybe 10 or 15 minutes away).  CPK was in the same building as the Olive Garden.  Even though the restaurant was essentially half full, we had to wait at least 20 minutes to get a seat where a server was available.  We wound up sitting far away from the rest of the customers.  Noah ordered his signature pizza and Ellen ordered a salmon dish – I had the fettucine with mushrooms.  It was a lot of food and we ate quite a bit of it.  There was an issue with the Salmon – it was seasoned with something very spicy and too hot to eat.  The waitress was kind enough not to charge us for the salmon.  Ellen and I shared the pasta dish.

We dropped Noah off at his dorm and drove to our first hotel, the Best Western Plus on Colorado.  It looked like a dump but it turned out to be OK – the room, while small, was comfortable and quiet (relatively).  What we didn’t like about the hotel was that the doors to the rooms were on the outside of the hotel and that we had to pay $9 a night to park our car.