A warm day on the island of Malta

We are in Malta instead of Naples because Naples was overbooked for cruise ships.

Maltese: Only Semitic Language in the EU (not Arabic or Hebrew)

The Sail In to Malta was very scenic. 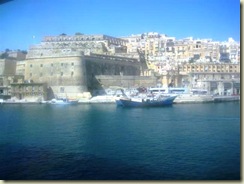 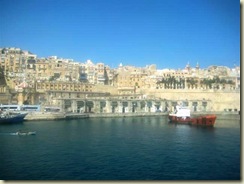 The Port is right across the street from the town.  There are a few shops near the terminal but the real village of Valletta is on the hill above the harbor. 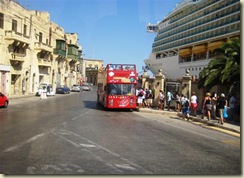 Mariner of the Seas docked in Valletta

We are on tour today - “Panoramic Malta”.  The bus is comfortable and the guide speaks English perfectly.

The first stop is near the harbor and gives us look at some of the architecture including the churches in the area and some of the fortifications the Knights of Malta built to protect the city, 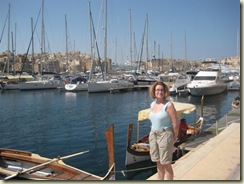 The Marina at Valletta 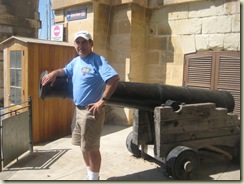 Always a Cannon in Town

Our next stop is the fishing village of Marsaxlokk (according to the guide, the “Marsa” designation indicates “port”).  So this would be the port of Xlokk.  It is Sunday, and everything is closed but some restaurants.  There is a lot of cigarette smoke and few vendors so not much to see.  In addition, we have to walk a ways from the bus to the water due to the tight streets. The bus ride continued around the island – Destination: Blue Grotto. The Blue Grotto, visible from the cliff above, is an interesting rock formation.  Some people take boats and check out the grotto up close.

On the way, our guide points out an oil platform in the Mediterranean.  It is not a functional platform (no oil on Malta) but it is parked there until it can be moved to its intended location. 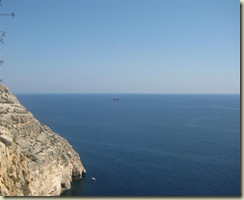 Oil Platform parked in the Sea

The pictures below are of the Blue Grotto taken from the cliff area above. 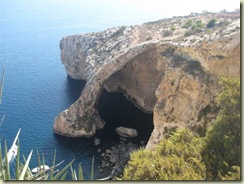 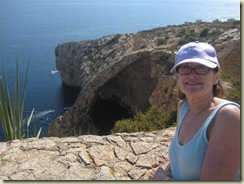 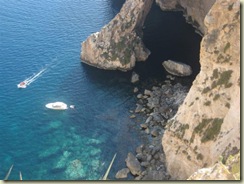 Our next stop is the Mdina Palace.  It is a magnificent structure complete with moat.  It sits in a park area of the city.  We didn’t go in and I did try to find some free WiFi with no success. Mdina Palace pictures are seen below. 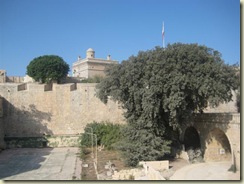 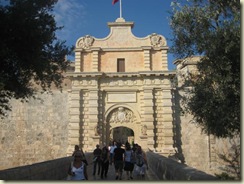 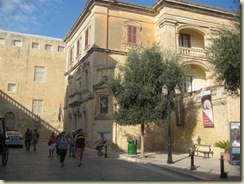 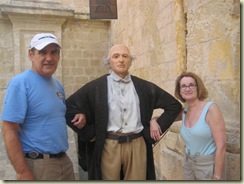 A local (not too animated) greets visitors to his shop

We left the tour near the entrance to Malta – wanted to find WiFi and check out some souvenirs.  We did find a McDonalds with free WiFi but my phone wouldn’t connect.  We did get some shirts for the kids and some nice Malta pins (thrown in). 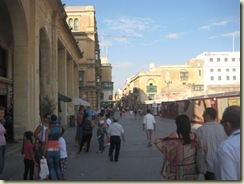 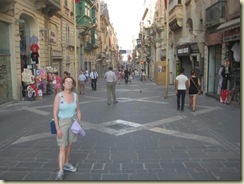 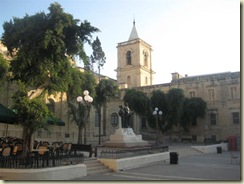 Square of the Siege 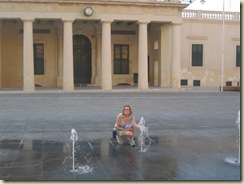 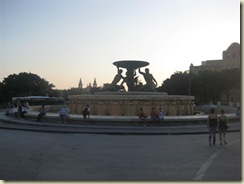 We found our way back to the ship in time for dinner.  I was able to pick up some free WiFi intermittently from the deck facing the city.  Checked out e-mail and that was about it. 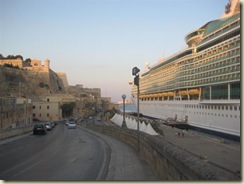 Down the hill to the Mariner of the Seas

I was able to get some very interesting pictures of our night time sail away (using my cell phone camera). 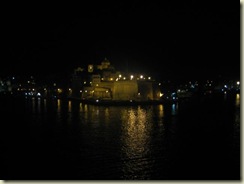