A beautiful day in Piraeus…

Today, we plan to explore Piraeus on foot.  The weather is pleasant.  We were told that the country is on a one day strike today so the traffic is heavier than usual and that there will be a lot of taxis around.  Our first experiences with the drivers in Greece is that pedestrians are fair game.  They will stop for signal lights but not at crosswalks or street corners.

Breakfast consisted of orange juice, an omelet, cheeses, toast, tomatoes, and chocolate cake (cream filled), and coffee (no decaf in macho Greece).  I thought it was OK.

The hotel is in a nice little neighborhood with shops and a pedestrian walkway.  You can reach a lot of Piraeus from the hotel.

We passed by a number of small parks.  The lady below is the centerpiece of one of these parks.  I don’t who she is (writing in Greek). 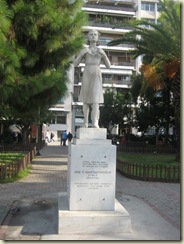 Although there are a lot of eateries near the hotel and near the port area, we finally settled on one of the semi-fast food places.  Splitting a tuna sandwich (a little like Potbelly’s) and freshly made fries did the trick (the challenge is still avoiding the ever present cigarette smoke).

After walking back to the hotel, we explored the area behind the hotel.  This marina – the Zea Marina – looks like the place where the Rich and Famous of Piraeus hang out.  We saw quite a few restaurants and found one we wanted to come back to later for dinner. 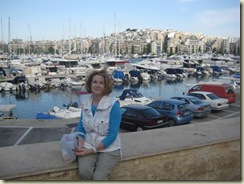 Ellen at the Zea Marina

Back at the hotel, we got the new room we had asked for earlier and at the same price.  This room, on the first floor, was beautifully decorated in the most modern Euro style.  It was on the street side and a bit noisy but it was a great room for the price. 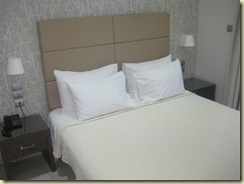 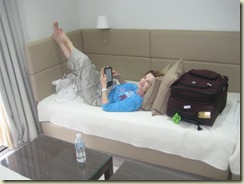 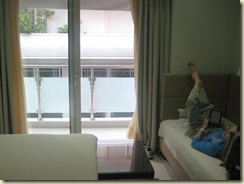 Our Upgraded Room (above three pictures)

We returned to one of the Greek Restaurants at the Marina for dinner. We ordered a Greek Salad (it came with a half pound slab of Feta Cheese on top),  Baked Cod and Pasta.  The dinner was good and not too expensive.  I also had a Greek Beer - Alfa. 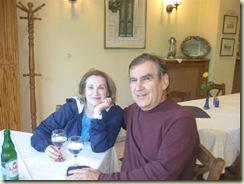 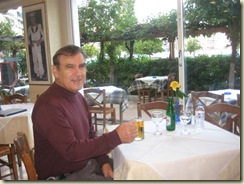 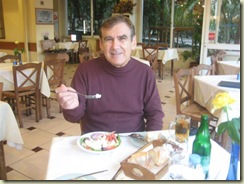 A long day of walking and exploring.  Piraeus turned out to be more that we thought it was.  The next time we are here, we’ll know where to stay and eat.