We are freezing in Ravenna, Italy.

We have two full days in Ravenna located in the north eastern part of the country.  There is a free shuttle bus that will take us from the pier to the city (near the rail station).  We do not have any tours for either day here so we are on our own.

The first thing we noticed upon leaving the ship was the wind and the cold.  The bus ride is about 15 minutes and it runs pretty often.  We were dropped off and told that most of the shops and interesting sites in Ravenna are on the road leading to the Plaza del Popolo. 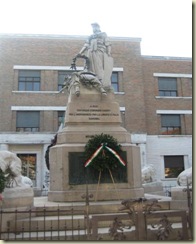 Statue near the Shuttle Drop 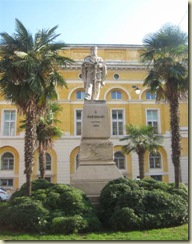 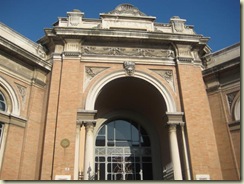 The Market near the Plaza Del Popolo

We start walking toward the Plaza because the agent at the shuttle drop also indicated that that’s where we would find some WiFi and a Tourist Information Office.  We did find the Tourist Office but she was not a lot of help.  I was not able to pick up any WiFi signal in the area either.  The big issue was finding any public washrooms.

The washrooms in the Market had only one operating washroom and there were people waiting.  We finally had to buy a hot chocolate for 3.5 Euro to use the washroom in a restaurant.

The decision was made to return to the ship and maybe come back out later when it got warmer.

We had lunch on the ship and never ventured out again that day.

There was time tonight to eat in the Dining Room and the meal was OK.

After dinner, we listened to Molly Dorsman in the Mosaic Cafe.  She included “Hallelujah” in her set – coincidence or did Tony ask her to put it in her program (I earlier suggested that he sing it).  Her version was different and good – her show was excellent. 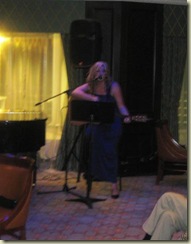 Molly Dorsman in the Mosaic Cafe

Showtime tonight featured singer Lelani Marrell.  She put on a excellent show – very personable with a booming alto voice.  She did a great job on “Don’t Cry for me, Argentina”.

When we got back to the room, there was a message indicator on our TV.  Checking out the message indicated that the ship was informing everyone about the scheduling of the enrichment talks (mainly mine) on the ship channel.  Somebody must have complained that they could not find out when the talks were being replayed. 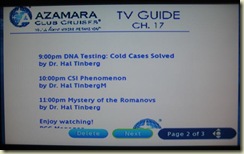 If it is still cold tomorrow, we will probably stay on ship and treat it as a “Sea Day” at port.

A lot of walking to go nowhere.