It’s a beautiful day to feel so old…

When I got back from breakfast, my door was all decorated with birthday stuff from the kids…how very nice. 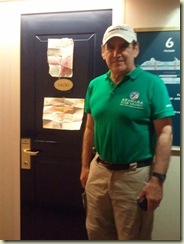 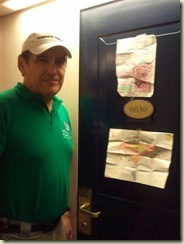 We are in Katakalon, Greece, gateway to Ancient Olympia. 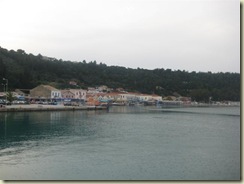 It is also the site of one of the Wonders of the Ancient World - “The Statue of Zeus at Olympia”. 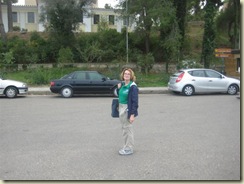 Ready to herd her flock

My guide is Thannos…he is a rumpled, academic, type of guide – as opposed to the spiffily dressed female guides we have had so far.  The ride to Ancient Olympia is not very long and soon we at the entrance to the archeological site. 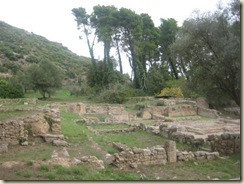 Ellen and her group are ahead of us (can you find her?) 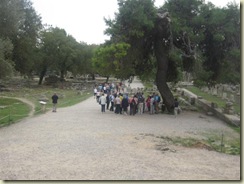 The Gymnasium (2nd Century BC) (with original columns) and the Palaestra – the wrestling school are shown below. 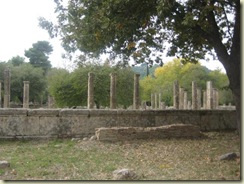 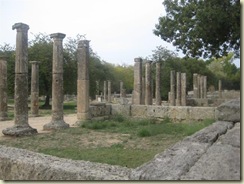 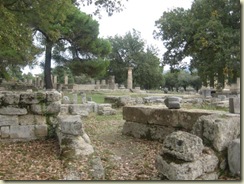 Olympia – looking down from the entrance 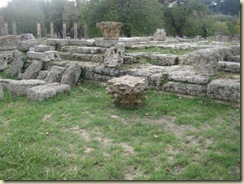 The Phillippeion, a circular monument built by Philip of Macedonia (Alexander the Great’s Father), to honor himself and his accomplishments.  You can do that when you are king. 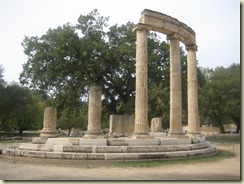 The Heraion, the Temple of Hera (Zeus’s eternally jealous and scheming wife), is a Doric structure from the 6th Century BC.  Women-only athletic competition (running) were held here. 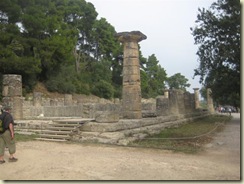 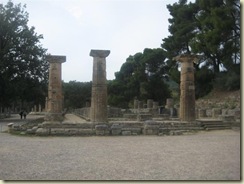 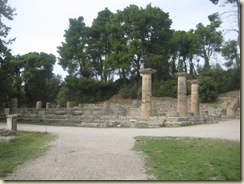 The Doric Temple of Zeus once held the Gold and Ivory Statue of Zeus, one of the Wonders of the Ancient World.  Only one of its 25 columns is standing – the rest are in a pile of rubble along side the temple. 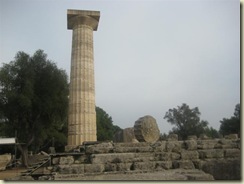 Temple of Zeus at Olympia

Hera’s Altar – near her temple – is the site where the Olympic Torch is kindled every Olympic Year.  The ceremony consists of several girls dressed as ancient Greeks and the lighting of the torch. Ancient gates (Roman) lead to the Olympic Stadium.  The stadium has a seating capacity of 30,000.  It also still has marble starting blocks (which everyone had to try out), a reviewing stand, and an altar to the gods. 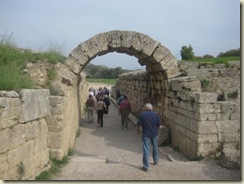 Gate leading to the Olympic Stadium 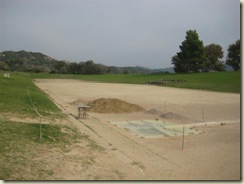 Our next stop was the Archeological Museum.  The centerpiece of the museum is the statue of the Goddess of Victory, Nike.  There are only three statues of Nike left in the world and this is one.  Her face was smashed when the statue fell and is being reconstructed from its 10,000 shards. 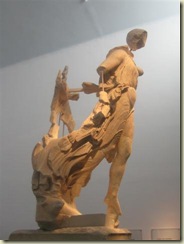 A number of statues were taken from the temple of Zeus and Hera and are on display in the museum (below). 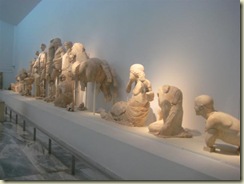 Other interesting set of artifacts include a Persian Helmet (left, below) and a Greek Helmet (right) (4th Century BC).  The guide told us that they had recovered DNA from the Greek Helmet (for what purpose, I wonder?). 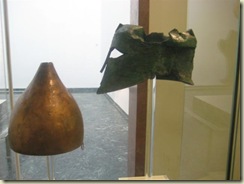 The Museum has a painting of what the Statue of Zeus might have looked liked (below). 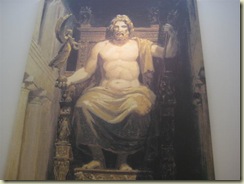 A statue of Hermes (messenger of the gods) and Dionysus (one of Zeus’ demigod sons) was recovered from the Temple of Hera and is on display here (below). 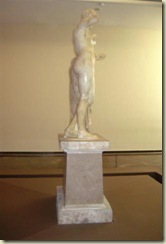 We had some free time to spend in the village of Olympia.  A beer (not bad) got me free WiFi (which I passed on to a passenger).  Soon we were heading back.  It was a tiring but informative day.

Dinner tonight was in Prime C – the other Specialty Restaurant.  For some reason, we got another gratis dinner – maybe they knew it was my birthday.  We shared a table with two Canadian women and it was an OK time.  Dessert was pretty fancy (below). 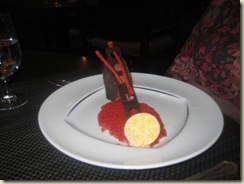 Talk 2- “DNA Testing: Cold Cases Closed” – was scheduled for 8:00 PM in the Cabaret Lounge.  I had the biggest turnout yet – 20 attendees – even though I was up against another show upstairs in the Looking Glass Lounge.

A big and informative day in Katakalon.