Today, we have put together a plan to visit family in Jerusalem.

We jumped on the shuttle to the port entrance and walked across the parking lot to the train station.  Using our MC, we purchased two one-way tickets to Hof Ha-Carmel (just two stops away) for 5 shekels per. 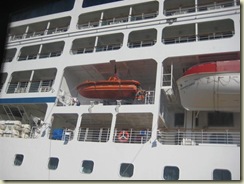 Our cabin from the pier (right in the center)

At Hof Ha-Carmel, we walked across the street to the Egged Bus Station to buy tickets for Jerusalem.  We didn’t have enough shekels but we did have a MC and an ATM card.  The agent said the MC would not go through so we tried to use the ATM card.  The terminal recognized the card but when I tried to input the PIN, the terminal cancelled the transaction after I entered only three digits.

I went back to the ticket window and asked the man to punch in the numbers manually.  I don’t know what he did but he did manage to get the card to work and we had our two round trip tickets.  One of the women working in the mall was going to give us money to take a local bus to a nearby bank.  A nice gesture but we did not have the time.  We had arranged a meeting time of 12:30 PM at a mall near the Central Bus Station.

The bus ride to Jerusalem took two hours (one less than the train) and was quite a bit less expensive.  The bus was comfortable enough and we saw quite a bit of the Israeli countryside. 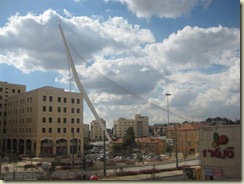 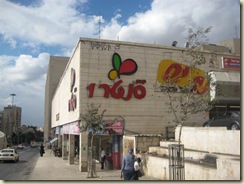 The Center One Mall – Our meeting place

We got to Jerusalem in plenty of time. Knowing that I would be picking up lunch, I tried out my MC in a pharmacy and it worked fine.

After some looking around the mall, the relatives arrived.  We had a nice kosher lunch (Shwarma – very good).  We also had free internet so we could send instant photos of our meeting to the kids back home.  However, again the MC would not go through.  Luckily, I had some US dollars which I changed to shekels in the mall (good rate of 3.54). This covered the meal.

We wound up spending three hours with family – a great time.

Finally, it was time to go.  We got on our bus (you have to get in line early to get a decent seat) after spending some time getting through security (in was rush hour).  The ride back was in the dark.  We bought one way tickets back on the train and were soon on the ship again.  The MC situation remains a mystery.

After dinner, we checked out the Halloween Deck Party.  The Cabaret Singers and entertainment staff all participated in the singing.  It was cool on the deck but seeing all of the strange costumes was interesting.  Three ladies actually brought along witch costumes for the occasion. 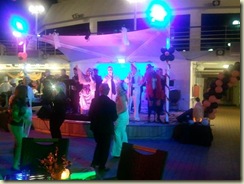 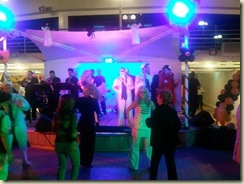 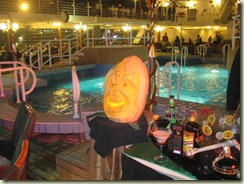 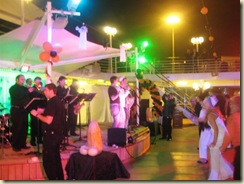 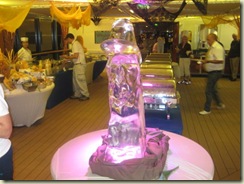 A very nice day and a visit we really had to make.