Day 3 in Haifa and it is a beautiful one…

Someone on the ship or in the terminal told us that the Haifa Tourist Board runs a free hop on hop off bus system that visits the major tourist areas of the city.  We went out to the place where the bus (blue and green markings) was supposed to pick up passengers. 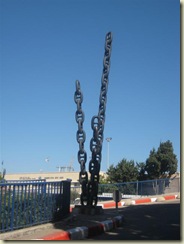 The bus was supposed to be there at 10:30 AM but no blue and green busses could be seen – asking locals did no good.  We did notice a bus parked in the Egged Bus Station.  As it turns out, this was the tourist bus but they had changed the colors (no doubt a security measure – ha ha). We hopped on this very comfortable bus and it was like we were on tour.

The bus stopped at the German Colony and then The Baha’i Gardens (where I was able to get some great pictures of the Haifa Port). 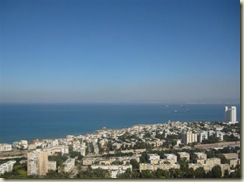 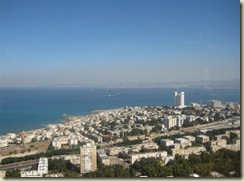 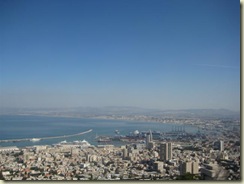 The bus took us through the Carmel Center Shopping Area (below) 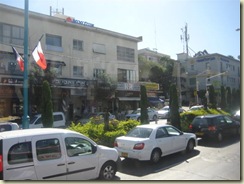 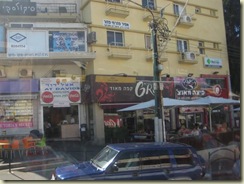 and then down to the terrific beach on the Mediterranean.  This would have been an easy way to spend 90 minutes at the beach (cycle time of the bus pickups). 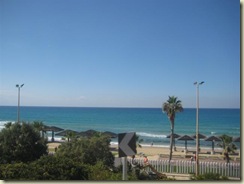 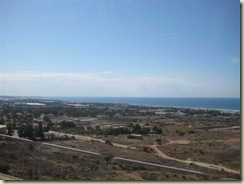 The Mediterranean and Beach Area.

We got off at the Hadar District.  This is an area literally packed with eateries (almost all Kosher) of various calibers.  There are also shops of various types.  The people seem to be very friendly and are mostly young.  It was lunch time and we were looking for a nice Kosher meat meal.

The problem was a lack of money.  We had difficulty yesterday with both credit cards and ATMs.  There was an ATM across the street from the restaurants so I gave it a go.  Everyone was on the terminal to the left – I used the empty terminal on the right.  It took the card, the PIN number, and soon we were flush with NIS.

After checking out a number of places, we stopped in at a small buffet type place.  The owner (a woman) was very friendly and explained the food.

We ordered some hamburgers in tomato sauce, roast beef slices, some Israeli “French Fries”, a number of salads (eggplant based and coleslaw) and two Coke Lights (regulation size).  The entire meal cost less than 60NIS (X change 3.5 = $17).  The food was good – we don’t generally eat off ship but who can pass this up. 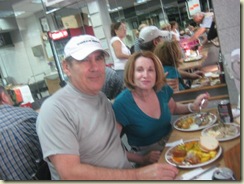 We wanted to get back to the ship before dark.  Instead of waiting 90 minutes for the bus to return to Hadar, we decided to walk back.

Before heading back, we stopped in at a nearby McDonalds for the free WiFi.  We caught up with everyone including the Israeli relatives.

There are two ways to get back to the port (you can’t really get lost because the port and ships are always in view) – you can go through the Wadi Nisnas District, an Arab neighborhood, or go around the Wadi.  We opted for the Wadi route.

We stopped at a park dedicated to the Liberation of Haifa in 1948.  It is a memorial park and there are monuments along the ground circling the grassy area.  You can see the port and the distinctive Bank Building (looks like a boat sail). 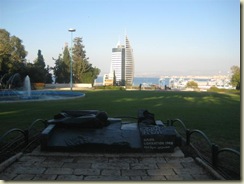 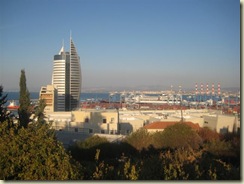 View of Haifa from Park 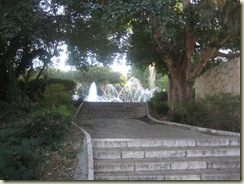 Fountain in Park seen through the trees

Our route took us through a group of Government Building including a police station.  In the parking lot of the station, several police officers were tending to their police horses.  We have, however, never seen a mounted cop in Haifa. Police Horses in the Haifa Wadi

The Wadi streets are very narrow and the trip is steeply downhill but we did make it through with no problems and wound up near the main street (Port Street). 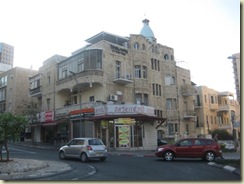 Structure in the Wadi – Interesting Architecture

We checked out a number of shops along the main street – I also borrowed some unsecured WiFi from the locals to check on e-mails.  The Judaica store we visited the last time through was already closed.

We headed back to the ship.

The sail away at night was pretty… 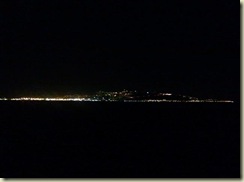