The ship is working through the logistics of sending tours to Jerusalem from Haifa instead of Ashdod.  Also, there are seven other cruise ships in Haifa and no freighters.  Shuttle busses are being used to move people from their ships to the terminal, which is literally a couple of miles away. 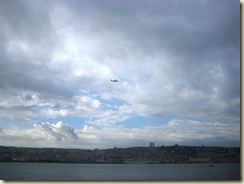 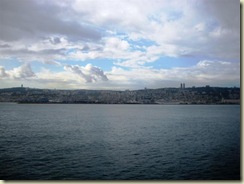 Haifa from the Quest 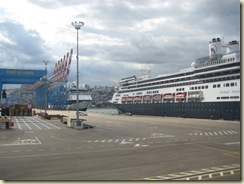 After letting everyone in Jerusalem know that we weren’t coming to Jerusalem today, we decided to go to Tel Aviv on the train.  We bought our roundtrip tickets at the train station and were in Tel Aviv in about an hour. 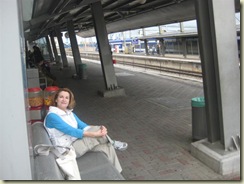 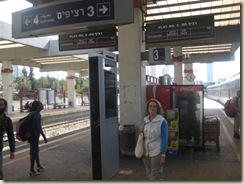 There are three stops in Tel Aviv – a soldier on the train told us to get off at the middle stop.  That actually turned out to be a mistake since this stop was essentially all diamond stores and restaurants. 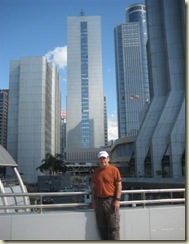 We walked around a bit and then had a nice kosher lunch at a nice restaurant right in the middle of the district. 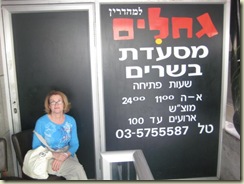 I had a 200 g hamburger and Ellen had some steak.  My burger was good; the steak was a little tough.  Especially good were the many samples of salads that were placed on the table (I thought they were included in the meal – wrong) as well as the paper thin pita break (also not free). 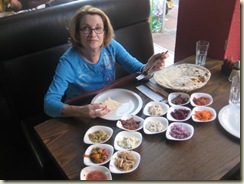 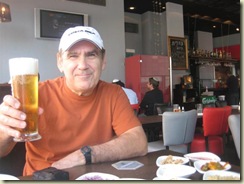 We walked a bit more looking for a WiFi hotspot.  After coming up empty several times, we were walking away from our latest “no WiFi”, when we heard a man shout at us.  He said we could tap into his router upstairs from his restaurant.  That’s what we did for about an hour.  We thanked him and he was very gracious about the whole thing.  Israel – there’s something about it.

We took the train back – although it was not the best visit we could have had, it was still Israel and we did leave some money during this trip.