Our worst night as cruisers…

We knew we were in for a rough ride when we got to the room last night but, sometime during the night, the ship hit a major swale.  This woke me up and it was an A ride the rest of the night.  About four in the morning, the seas let up a bit and I think I got an hour of sleep.

Today, we are in Kusadasi again.  This could be number 4 or 5, not sure.  Again, since all of the tours are to Ephesus, we are going to go out on our own. 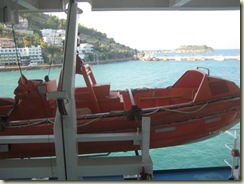 Kusadasi from our cabin

I am scheduled to give my second talk today at 6:30 PM.  Attendance expectations are low due to the competition with dinner.  I am encouraged by the ad below that we saw in the elevator.  It could help. 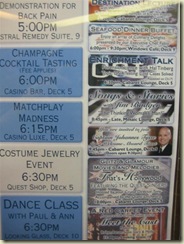 As always, Ataturk is on top of the hill overseeing things. 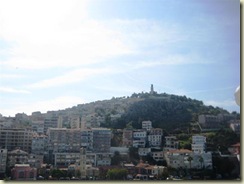 Ataturk on the job 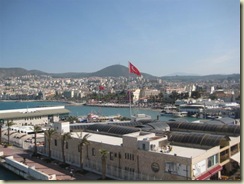 Kusadasi from the deck of the Quest

After spending a little time in the market area, we decided to go to the other end of town.  This takes us to the walkway directly under the statue of Ataturk.  From this walkway, we can see all of the ships docked here today.  The most important ship, besides us, is the Celebrity Constellation.  A very nice ship that we will be on next year. 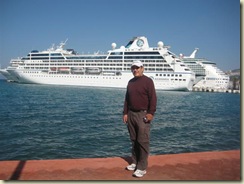 On the harbor road 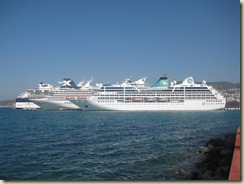 All of the ships in a row

This road leads to Pigeon Island, the island after which Kusadasi (Guvercin Adasi - “bird island”) is named. 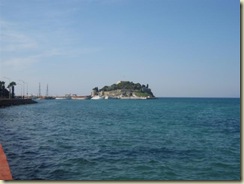 Continuing along the road, we arrived at the entrance of the isthmus of land connecting Kusadasi to Pigeon Island. 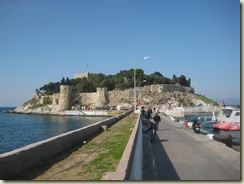 The walkway is lined on one side with vendors hawking all sorts of goodies.  On the other side are the boats.  The highlight of Pigeon Island is the castle/fort structure that dates back to the 16th century.  The castle and entire island is open to the public and free.

We climbed as high as we were allowed and then proceeded to circle the castle.  On the other side was a modern – if not functional – lighthouse and a great view of Kusadasi Harbor and city. 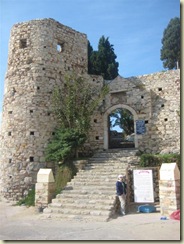 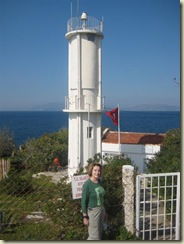 One interesting site we did see on the other side of the island was the hotel we stayed at when we did our business/pleasure trip to Turkey years ago.  It was a great hotel but a long way from Kusadasi.  On that trip, we were a bit hesitant in heading into town. 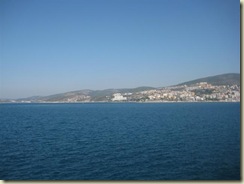 Four Star Hotel from our first trip to Turkey 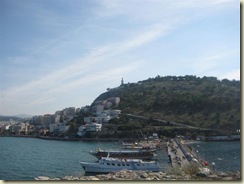 We headed back the way we came.  Along the way, we ran into a hookah place for the first time (there are others, I’m sure). 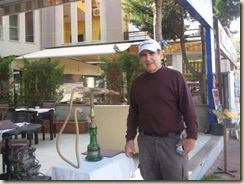 My second talk,”Cold Cases Solved”, was scheduled for 6:30 PM and the turnout was just about what it was the first day (10 people).  Still a small but mighty audience and the talk went well.

The forecast is for calmer seas tonight…