Another crazy and restless night. The room was comfortable – sleep was just not there.

The joy of port days - the Cafe opened earlier this morning and the excursion folks did not make the venue any more crowded than usual. I had my usual breakfast "waffles plus" breakfast plus a view of the sail in. 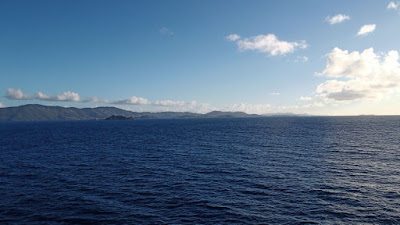 At around 9:30 AM, Ellen and I went back to the Café for her breakfast and my muesli and coffee. This will change the meal schedule for today.

We found great loungers on Deck 5 port side facing the city.  We had views of superyachts, including the superyacht, "Milestone", 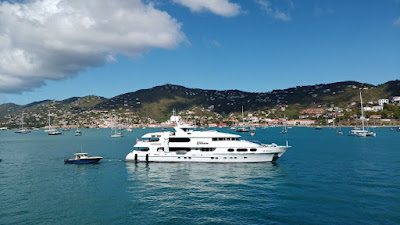 and countless catamarans (seems to be the vessel of choice).  I also got to see several aircraft take off from the nearly International Airport.  We are docked behind the HAL Eurodam and the Allure of the Seas and its 6000 souls are docked at Crown Point Marina behind the hills in the distance.

“Without Fail” is starting to sound familiar again and then it doesn’t.  My final assessment is that I have not read it.

It's nowhere near iconic, but I actually got into a photo on Deck 5. 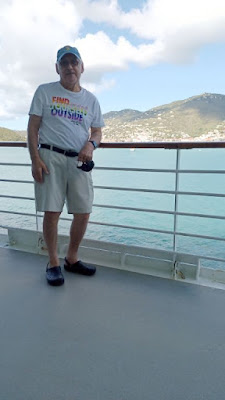 We had a very late lunch up in the Oceanview Café.  I was brave enough to try the pizza, which turned out to be OK, along with some tuna on a French roll.  Diet Cokes made it all taste better.

I also took another panorama shot of Charlotte Amalie but the less inhabited side.

Right in the middle of a page, my Kindle froze.  When I restarted it, my book was not there.  I turned on the Kindle Wi-Fi and tried to reload it and after several attempts it reloaded.  I am hoping that that little anomaly is a one off.

We forgot to order our Kosher Meals yesterday (we were upstairs for dinner and couldn't speak to the Maitre D) so we are eating off the menu tonight in the Discoveries Restaurant.  I had the Cream of Celeriac Soup and the Salmon with a baked potato and some creamed spinach.  Ellen also had the Salmon with veggies.  The "always available" dinners are just fine.  Bonus:  We watched the sail away from our dining room table. 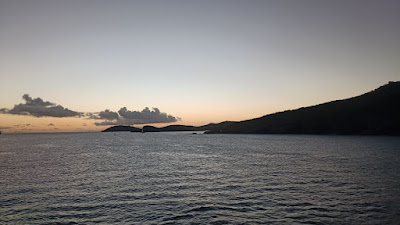 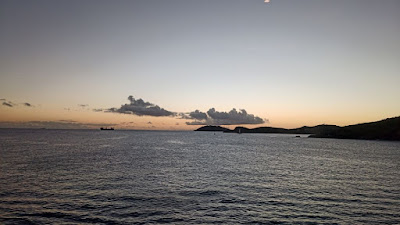 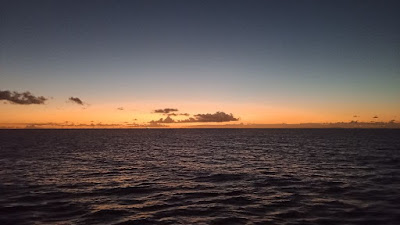 We passed on dessert in the Dining Room since the social distancing is becoming iffy.

We had some coffee and tea in the Mosaic Café until the Cabaret Lounge opened. 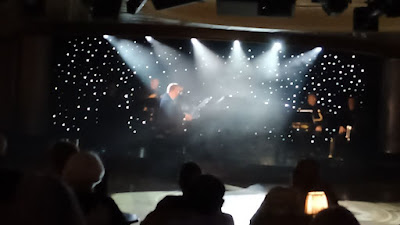 The volume was a little loud but, while I could not understand a word he said (a Brit), he is an excellent pianist and does a pretty good Elton John cover.  His “Piano Man” cover was not very Billy Joel like but OK.  He spent a lot of time going over some personal stories including how he and some other passenger on this ship got stuck on the Azamara Pursuit in March 2020 for six weeks looking for a port to disembark. Oh, yes, we ordered White Russians which were good.  We also wore our masks for almost the entire concert – a lot of people in that room drinking so essentially a mask-free room.  Personal NOTE:  The eating and drinking NO MASK loophole is just that.  People drink a bit and then do not put on their masks again.  Also, there are a few “freedom noses” on this ship and there is no official reminder or policing of that.  Not paranoid yet – just cautious.  Speaking of masks, the captain is his pre-push talk, also reemphasized the need for mask usage.  So, it’s not just us.

We went back to the room, which seemed to be at a comfortable temperature.

We have an excursion tomorrow we are hoping to get some sleep tonight.