We were supposed to be on an excursion today to Orient Beach on the French side of the island but we got a letter in our room last night saying that high winds had cancelled the excursion.  We now have an entire day to ourselves (kind of like all the days).

Got to the Windows Café in time to watch the sail in into Philipsburg.  I also had another wonderful breakfast even though I did not get my favorite seat.  Sour cream was delivered and the waffle was freshly made.  The coffee was excellent as well.  I brought Ellen her breakfast but lost her brioche to brisk winds on the pool deck.

We considered walking over to the shopping complex but decided against that considering the temperature. 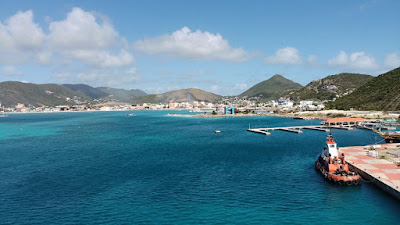 I took a great panorama shot of Philipsburg and environs from the back deck.

We are docked next to the Crystal Serenity and MSC Seaview.  At least, there appear to be people on both ships. 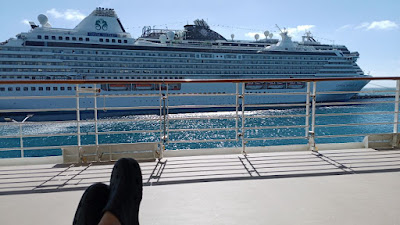 While having my morning iced decaf mocha in the Mosaic Café and going over my next talk, we ran into Sasha and Dima, the dance couple. Sasha said she recognized us even though she couldn’t remember our names.  We had a nice time reconnecting with them (they are such nice people) and finding out what they have been up to since we saw them last.  They talked about how difficult it is to stay in shape (and while quarantined for COVID).  For a few moments there it felt like old times when we were part of the entertainment contingent.

We also chatted a bit with Captain Johannes – he gave us some more information on the Queen Victoria and said that that’s where the ship is being “stored” until it can get back into service.  I guess keeping the ship in the warm weather of the Caribbean is better that the unruly winters of Southampton.

We had lunch in the Windows Café – I had my spinach tuna wrap but today the green dip it comes with was almost too spicy to eat.  The wrap was still good and the onion rings were, as usual, excellent.  Today, I had a Guinness Stout instead of my usual Stella. 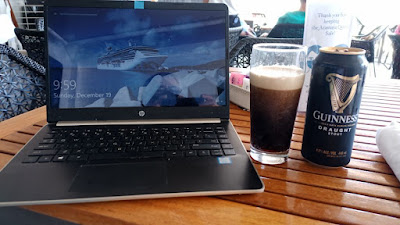 Because of the windy conditions, there was a wonderful breeze across the decks.  We found some nice loungers on the shady side.  I have started a lot of free Kindle Books recently and I’m not happy with any of them.  So, I downloaded two Jack Reacher Novels that I am pretty sure I haven’t read.  I started the first one, “A Wanted Man” and I am certain I never read this one.  The hook appeared early as is does in most Lee Child’s books.

We pre-ordered Kosher Meals for tonight in the Discoveries Restaurant.  I had Penne Pasta with meatballs.  There wasn’t much tomato sauce but the meatballs were really good – tasted just like mini-burgers.  Ellen has the brisket and it looked and tasted good – both of our entrees came with a ton of carrots.  Armando, our waiter, told us that the meals come in their own real dishware and they just microwave them.  The portions are huge and the taste is pretty good.

Showtime tonight is a special event, a “Destination Celebration”, where local performers put on a show celebrating their culture.  Deck 9 was decorated just like White Nights with tables and chairs. 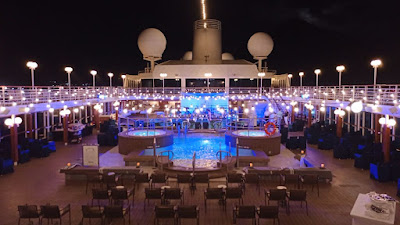 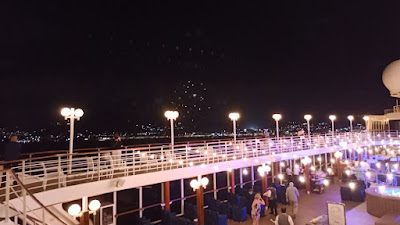 We found a couple of chairs on the Forward side of Deck 10, a spot from which we could see everything (even a shot of St. Maarten in the gloaming, a shot of the moon over the island, and the MSC Sea View all lit up). 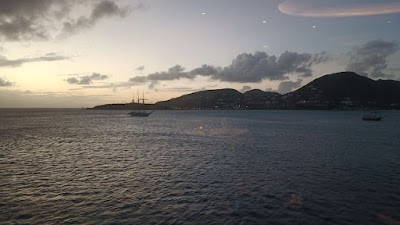 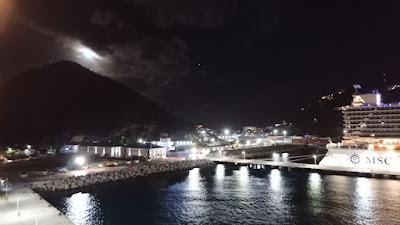 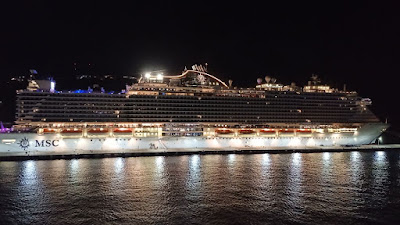 The show started off with the St. Maarten Steelpan Orchestra, playing island songs.  I thought they would be loud but they weren’t and the music was pleasant and definitely island music.  Calypso legend, Isodore (Mighty Dow) York followed up with some local songs – good voice and entertaining.

The showstoppers were three Island ladies knows as “The Soul Sisters”.  Their vocals were perfect and their stage presence solid. 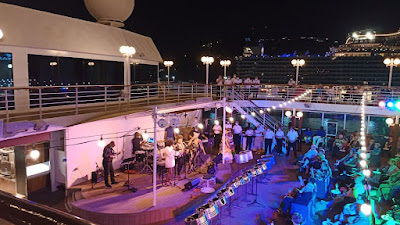 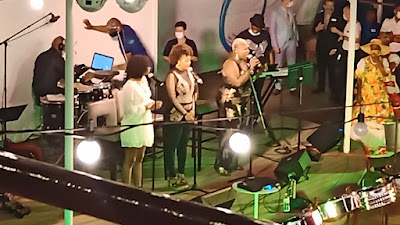 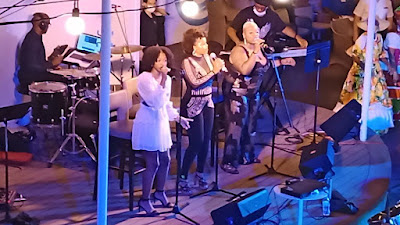 They did some Aretha Franklin songs and, of course, “I Will Survive”.  They were backed up by two ladies doing some choreography on either side of the stage.  Soon, Tanya and some of the crew and even some passengers got into it – the Island rhythm is going to get you.  It was a great show. 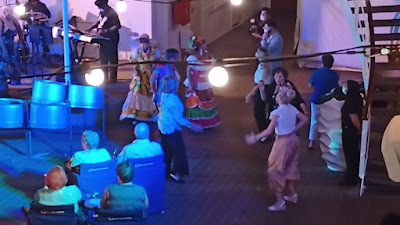 When we got back to the room, there was a bottle of rum on our table – the bottle had a handwritten “Azamara 2021, St. Martin” label. 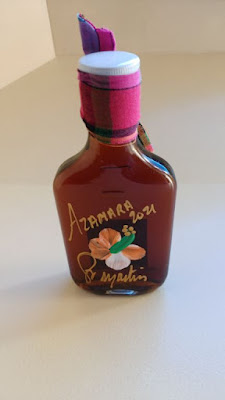 We now have to figure out how to get it home.

We set up another excursion for tomorrow – it’s early so we are ordering room service.