Virgin Gorda is a tender port; the weather is pretty tame so our short ride to shore should be no issue.

COVID:  Guests can roam free on Virgin Gorda but have to carry picture ID and vax cards.  There is no outdoor mask requirement.

Our excursion today, “Virgin Gorda by Land and Sea”, has a meeting time of 8:15 AM in the Cabaret Lounge so we are ordering room service. I got a real nice shot of the pre-dawn sea while waiting for the food to arrive. 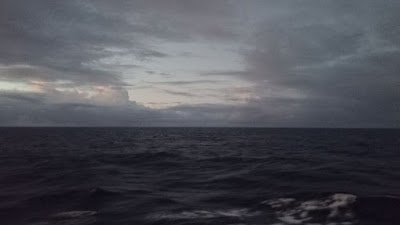 Room service delivered our breakfast at the 6:30 PM delivery time on the dot.  I had two pancakes and two fried eggs; Ellen had a waffle and two eggs (an extra couple of fried eggs also came with the order for some reason).  The breakfast was very good and we got to the Lounge on time.  It was only a few minutes until our tour (#6) was called. We went down to the pontoon on Deck 3 to scan out and catch our tender. From our tender we could see the other tenders coming and going. 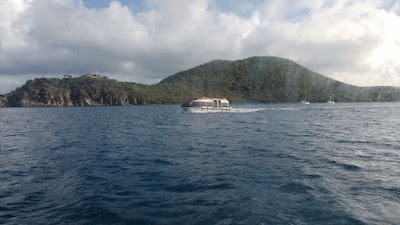 The tender was not too full so we tried to distance ourselves from other passengers.  The ride to Spanish Town was short, maybe 10 minutes (the town is in the distance in this shot). 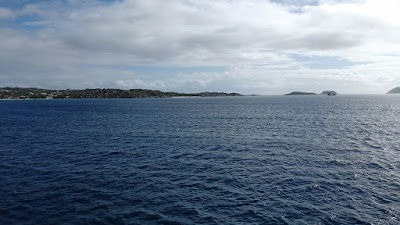 The harbor was full of other small boats as we wound our way to the tender pier. 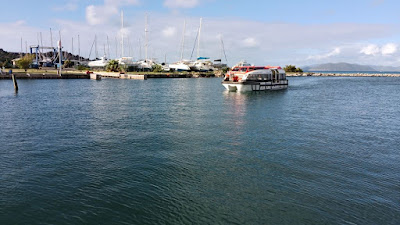 From the tender pier, we could see Azamara Quest at anchor. 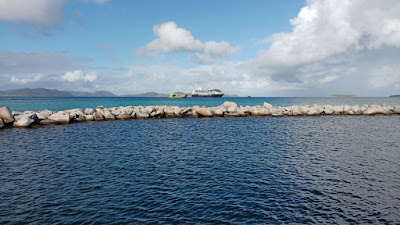 The first part of our tour involved seeing the island by sea on a boat called “Ocean Girlz”, which was berthed just across from the tender landing.  We boarded the boat (quite a step up to get on) and we were off. 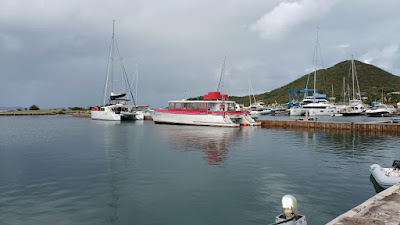 The first site we saw was The Baths. 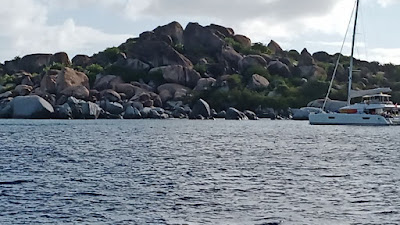 These huge granite boulders that line the beach were formed by lava flows that never reached the water. Over time, the lava eroded into these shapes that we see today.  The Baths are now part of a National Park and probably the major tourist destination on Virgin Gorda.

I have to admit that I did not understand much of what the guide was saying but we did see some interesting sights: Necker Island, Richard Branson’s private island (with its own wind turbines), 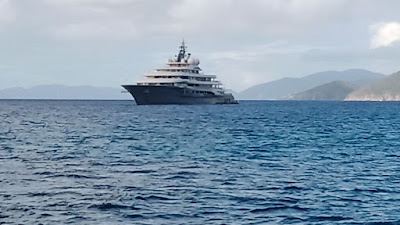 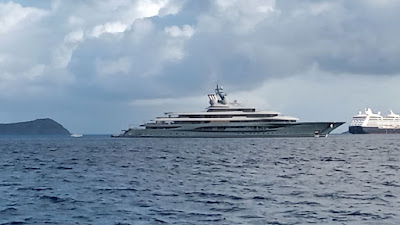 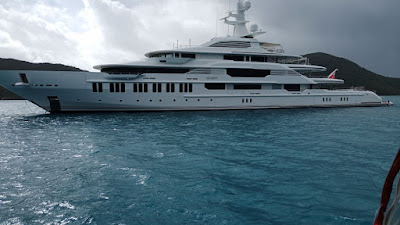 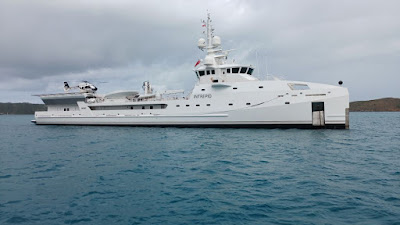 We have seen Flying Fox before, in Cabo San Lucas, and what makes it interesting is that it seems to change color depending on the incident light. When we first saw it, it looked like a military vessel but later it was light colored.  The Intrepid looked like a research vessel and had a helicopter parked at the rear.  All three yachts are expensive and in the top 250 of the World’s most expensive yachts.

There are many small islands around Virgin Gorda, all with names I couldn’t possibly remember even if I could understand the guide.  One of them had a very posh looking restaurant 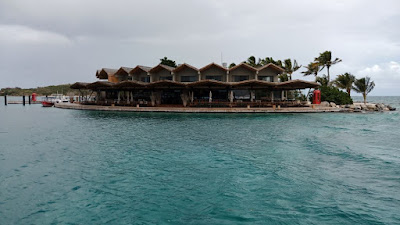 and others had lots of homes situated on the hillsides. 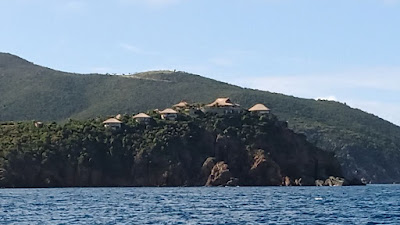 After about an hour or so, the guide came on the PA to announce that the tour bus had issues and that we would complete the tour on sea.  We visited a few more islands and saw the same superyachts a second time. As it turns out we were on Ocean Girlz for about three hours; the drink served, Rum Punch, was good (it had grapefruit in the mix) and after the itinerary change, the bar was open for more punch.  Some passengers took advantage of the deal but one was enough for us.  We got bounced around pretty good on the little boat (the pilot was really moving through those waves); 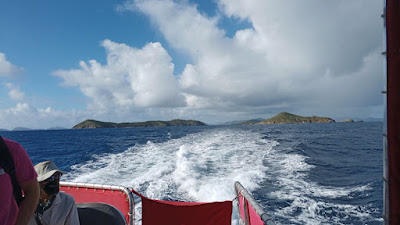 at one point, I got knocked down by a sudden lurch of the boat while trying to take a photo.  My phone ended up in a canvas at the back of the ship.  I caught myself and only got a bruised forearm.  My phone survived as well.  This is the picture I took before I was knocked down. 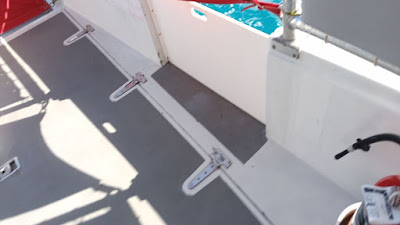 We thought about checking out some of the shops near the pier - they all had occupancy limits - but decided not to.  The highlight of the tender ride back was the opportunity to get some great pictures of the ship at anchor. 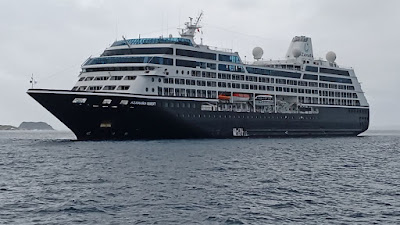 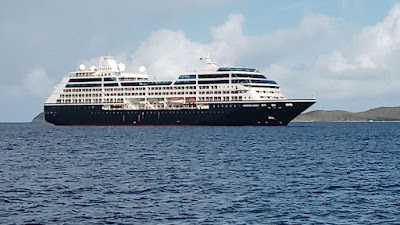 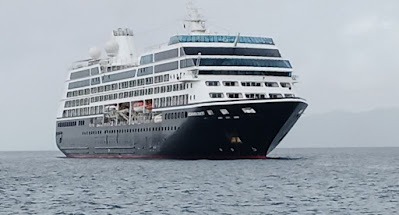 I also managed to get a shot of Ellen as we made our way back to Quest. 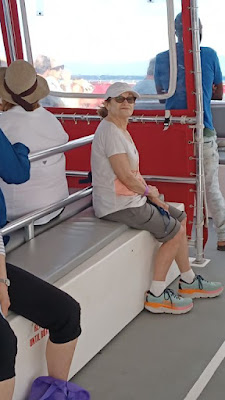 I also captured a rainbow on the way back. 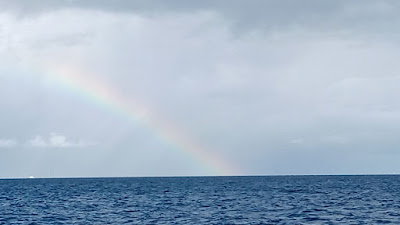 We went to the Ocean View Café but I didn’t eat much for lunch.

We couldn’t spend any time on the open deck because the tenders were down and the davits were roped off on both sides of the ship.  We instead went to the non-smoking couches on Deck 9.  They are pretty comfortable – you just don’t have the nice breeze and clear view of the ocean going by.

Both our Matre D’ and Hostess have been very helpful in arranging for special meals when there is nothing on the menu we can eat.  Tonight, the chef prepared Fettucine Alfredo just for me.  Just appetizers for Ellen.  The fettucine was very good – it came all compressed just like the spaghetti marinara did the other night.  Once unraveled, it was creamy if not a little to al dente.  All of the pastas so far have come that way.

Passed on Showtime – Jakub Trasak – Violinist and next door neighbor. We are not big violin fans though he is probably very good.

Seas are still smooth and Captain J has promised smooth sailing almost all the way back to Miami.