The room was quiet all night long and the bed was very comfortable.  The fridge, which we had turned down, came on in the middle of the night and woke me up.  Went back to sleep so that helped.

Slept until about 5 AM – at 6:15 AM, I went down for breakfast (breakfast here is very early and short – 6 – 9 AM). The sun hadn't even come up yet (the picture below was taken out the window of the breakfast venue). 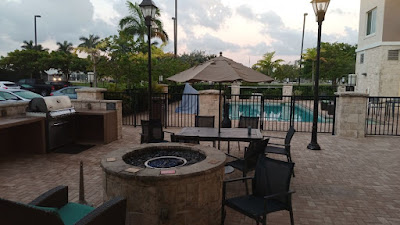 I had a small bowl of granola, two mini waffles, some scrambled eggs, a bite of a blueberry muffin, and two cups of coffee (no decaf available).  Ironically, we had gotten an email from the hotel indicating that they had discontinued their breakfast and everything was pre-wrapped "grab and go".  I called them and they said that wasn’t true and it wasn’t.  I found a table away from people and I thought the breakfast was pretty standard but OK.  Besides me, only one other person wore a mask at breakfast.  It's the Florida Freedom way.

Ellen went down for breakfast after I returned.  She liked the breakfast, as well.

Checkout is at Noon so we had plenty of time to relax before we have to vacate the room.  My receipt was emailed to me so all I have to do is drop off the card keys.  I should mention that the card keys also get you through the door connecting the pool and lobby and are needed to run the elevators.  You have to scan your card before the elevator will move.  Elevators here are a bit scary since very few people are wearing masks.  I've let people without masks go and wait for the next elevator (hoping that the droplets have dispersed by then).

The hotel does not offer a shuttle to the Port of Miami so at 11:45 AM, I called an Uber for a ride to the Port of Miami. Uber #1 did not find the hotel but Uber #2 did and we were off to the port.  The ride, which took us through a bit of traffic and downtown Miami, took about 30 minutes and cost $34.17 including the $4.45 tip (taxis ran about $50 not including tip).

Azamara Quest was at Pier J (the driver seemed to know that) and indeed it was.  We found the manifest and tagged our bags with Room 4014 and then passed through security, then to a testing area for a rapid COVID test (not BINAX but still administered by Eurofins). You received a number and when your number appeared on a large display monitor, you went to get your result.  The board wound up malfunctioning and numbers were called out.  If you passed, you got an Azamara sticker for your shirt 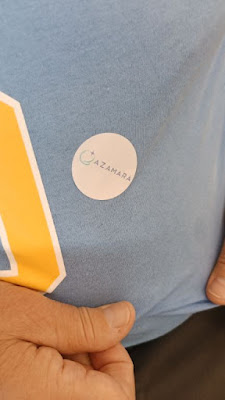 and then we were allowed to proceed to check-in.  We checked in with the Pier Coordinator (or someone like that) and then waited in a group to be escorted individually to our room (I supposed that was some kind of COVID prevention protocol). Each set of guests made a stop in the Cabaret Lounge for the safety briefing - previously the lifeboat drill.  This briefing involved Danny, the CD, explaining the warning signal and then demonstrating how to put on a life jacket - the whole thing took about five minutes.  We were then taken to our cabin. The boarding process took a bit of time but it was a smooth operation.  Room 4014, our assigned cabin, is almost midships port side – near the Med Center. Our key cards were at the room and they both worked.

We were going to make reservations for the Discoveries Restaurant and then found out it was open seating.  We set up our internet and our special drink package with Guest Services and then met and spent some time with Tanya Roberts, the Assistant Cruise Director, who was very warm and welcoming.  The CD Office area on Deck 3 has been completely changed – additional staterooms have been added where their offices used to be.  The hallway with these new rooms is extremely narrow and only one person can walk the corridor at any one time.

I stopped at the Mosaic Cafe and had the barista make me my signature Iced Mocha Decaf.  I used to add Latte at the end but he told that was not necessary because the drink already had milk in it. 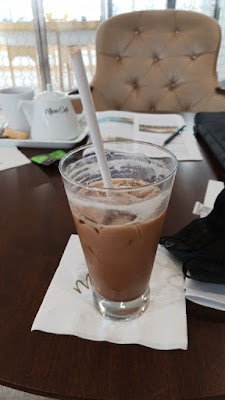 We met the other speaker, Chuck Richardson and his wife (we have sailed with them before) and arranged to meet with Tanya at 5:30 PM to film a promo video for the lectures.  To fill out the staff – Johannes Tysse, Norwegian but now living in Charleston, SC, is our Captain (we have sailed with many times on Journey). He is probably my favorite Captain. The Cruise Director is Danny Turner, a Brit who we are sailing with for the first time.  We also ran into Justin, the Activity Manager, who was a little under the weather from his COVID booster.

We walked around the ship a bit to see what, if any, changes had been made by the new owners of the cruise line.  There have been some but we couldn't tell.  From there we went to Deck 9 After - technically the Sunset Bar - to get some wonderful pictures of Miami.  I also had a chance to try out my new drink card by ordering a beer. 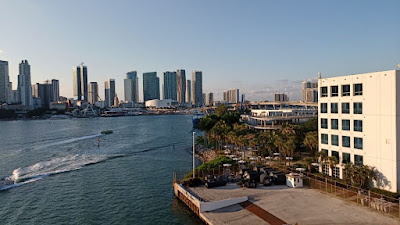 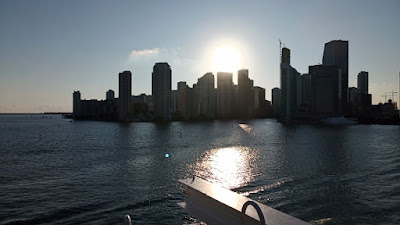 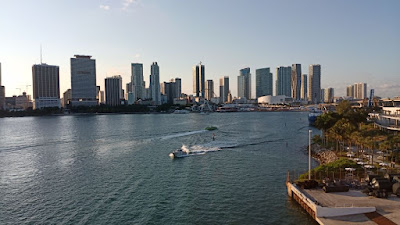 Our bags made it to our room – Ellen put a lot of it away while I was filming the video. I am usually pretty anxious about the video but the banter with Tanya came easy and I think it was successful.

The ship is not sailing full so there was no crowd in the Discoveries Bar adjacent to the restaurant.  I had my mojito and ordered an apricot sour for Ellen for our pre-dinner drinks (liked mine; maybe too much ETOH for Ellen).  We got a window seat in the Restaurant away from most people.  The service was a little slow and the noise level increased when two large parties appeared around us.  We both had the Sole with Tomato Sauce, I also had a Cesar Salad, and we both have mushroom Voule a Vent (always good).  I had mango cheesecake for dessert.  The experience was not as positive as we had hoped.  There are alternatives yet to explore.

We watched the sail away from our restaurant table. 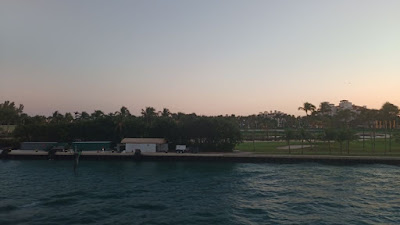 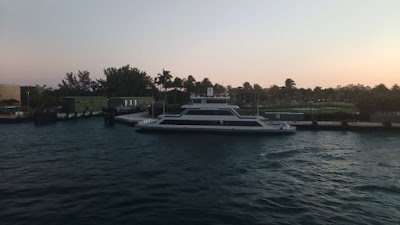 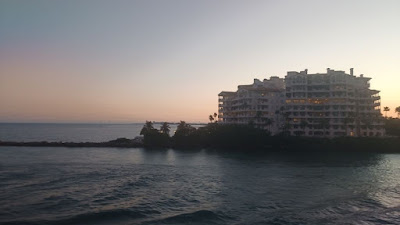 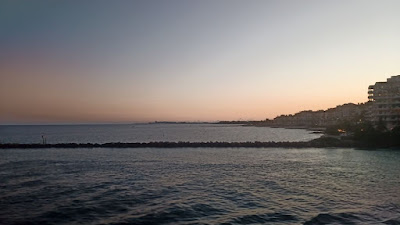 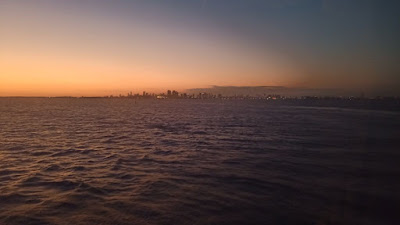 The headliner tonight was John Bressler, pianist and vocalist. 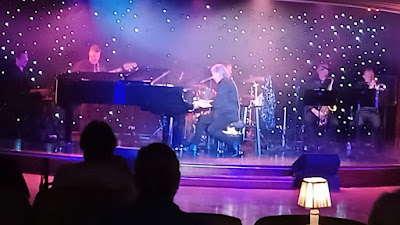 We had seen him some eight years ago on a Princess Ship.  He had a very small audience but put on a very nice show. He said he was a last-minute addition and since he was not listed as a guest entertainer in the info pamphlet, I’m guessing he was. He was funny and, even with his trademark Rod Stewart voice, sang some nice songs including one of his own songs, “A Dog, Comfortable Shoes, and You”.  Unlike the Celebrity Apex, CD Daniel did not announce any of the enrichment activities for the following day.

We went to the room after the show.  Still tired, and sleep deprived.  And I have a 9:00 AM Lecture tomorrow