Didn’t sleep well because of the time change – just the way my circadian rhythms work.

The seas are a little choppy. 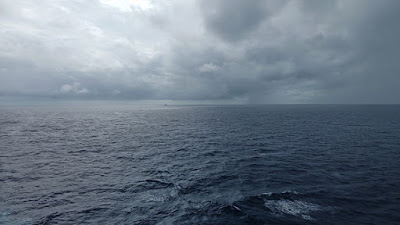 I got up early enough to catch the sunrise from our cabin window. 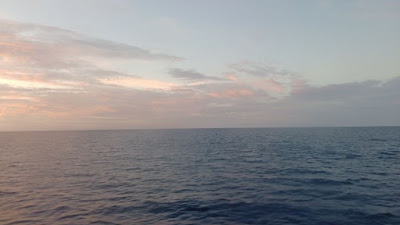 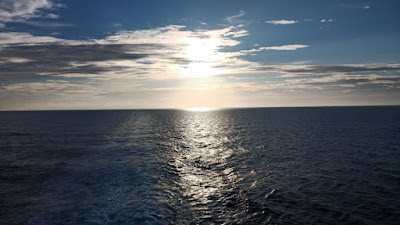 Ellen and I both went up for breakfast in the Windows Café at 7:30 AM because we were going to go directly to the Living Room for COVID testing for continuing passengers and UK Nationals.  For the first time on this cruise, I tried a veggie omelet and ordered a waffle for backup.  The waffle was the better choice as the omelet was a bit light on the veggies (I probably should have been more specific).

There was no crowd in the Living Room as there are only 35 continuing passengers and 44 Brits.  We got there at 8 AM and the testing was scheduled until 10 AM so there won’t be any delays.  Less than 30 minutes later we both got emails that we were NEGATIVE, which was good news.  The captain has no updates on the departure testing so I can assume that there were no positives in our small group so that's a good start for Cruise 2.

There was a little confusion on the start time for my sixth and final talk.  The Insider had me at 10 AM in the big activity list and 9:00 AM in the spotlight summary.  Tanya made a announcement at 9:00 AM that cleared up any confusion.

My 10:00 AM talk (the last one on this cruise) – “Forensic Detectives: The Search for Jack the Ripper” – had the biggest turnout so far – about 80 attendees (maybe more). 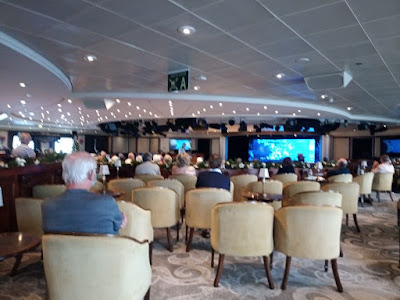 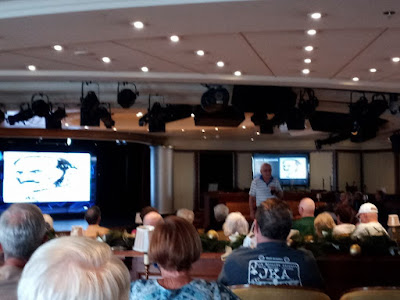 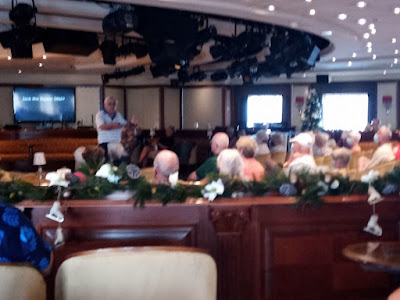 For lunch I had a Beyond Burger, onion rings, and salad from The Patio.  The burger was good but it did taste like it was baked (perhaps because it started off frozen). I had a Stella with my meal (don’t want that Premium Drink Package to go to waste).  Ellen, who is more adventurous, found some Zucchini Parmesan (thought it was eggplant) but reverted back to the tuna and egg salad scoops.  I really haven't had much gelato on this cruise but today I tried the Cherry Amarino gelato (I like cherries) but didn’t really like it.

At least three engines are running as we scoot back to Florida. 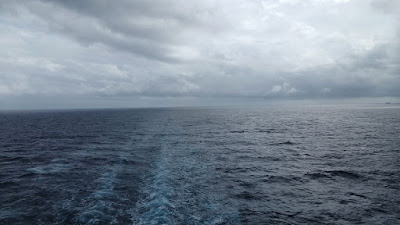 Since we were heading North toward Florida, it was too cold and windy on the open decks.  I tried to spend some time in Mosaic Café, while Ellen went to Ballet Class today as the only student and also went to the Jewelry Making Class.  I stopped into the jewelry class - held in the Discoveries Lounge - and helped pick out beaded letters.  A good turnout for this class - only ladies, however.

We spent the rest of the afternoon in our room looking at the gray skies and rain outside.  I made good progress on “Wanted Man” – a very interesting book – a bit different than the other 25 Reacher books I’ve read.

We had dinner in the Discoveries Restaurant.  I had Risotto with fried mushrooms, which was very al dente but still very tasty.  I also had a good salad with avocado.  Ellen was the clear winner tonight because the menu featured trout which she got with no shrimp.

I did happen to get a nice shot of the sunset - haven't had the chance to take many of those but this was a very colorful one. 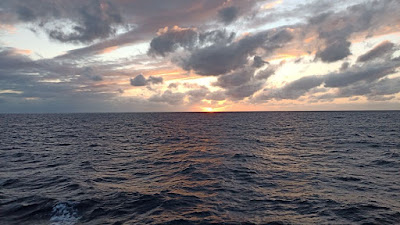 Showtime tonight was the Production Show, “Just Dance”. There were some good songs and dancing but after a while the band and the singers became too loud. We didn’t bring our earplugs, so we headed to the room. 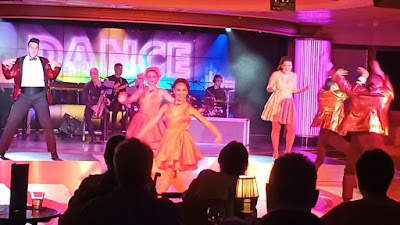 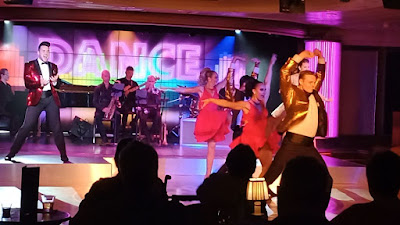 We found out that we will be changing rooms tomorrow, so we put all of our non-hanger clothes into our suitcases along with our meds and vitamins as well as toiletries.  The other stuff including shoes will be taken to our new digs on a cart.  It didn’t take too long to get that done so we are ready for the morning.

Seas are a little choppy the closer we get to Miami.