My talk this morning, “DNA Testing: Cold Cases Solved”, is at 10 AM in the Theater.  This gives me a little more time but I still opted for Room Service.  I had two pancakes, two fried eggs, and decaf coffee.  Ellen had the lox, cream cheese, and bagel plate.  I was up early enough to catch a glimpse of a semi-friendly sea. 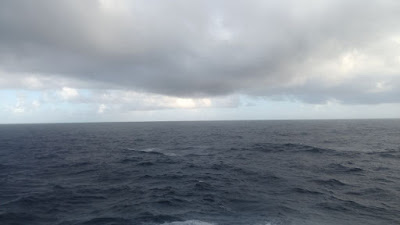 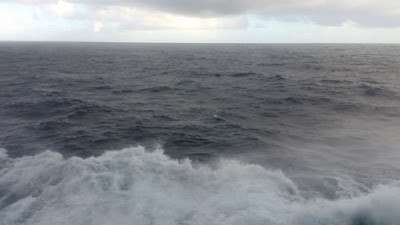 When I got to the theater at 9:45 AM, there was no one there.  The Insider did not have a blurb on this talk and there was no announcement the night before.  However, as the start time approached, a lot of passengers appeared.  Based on a capacity of about 400 passengers, I would say there were about 80 folks present.  It is hard to tell but there were a lot of people sitting in the front section and along the sides.  The talk went very well including the new section on the genealogy.  A few people shard positive feedback.  The talk finished right on time and I rushed to break down my stuff so the future cruise talk could start on time.

I spent a little time in the Mosaic Café catching up on this log and going over my next talk accompanied by a couple of mochas.  I was told by the barista that “mocha latte” is redundant – call it a decaf mocha because they all are “lattes”.  Anyhow, the drinks were good. 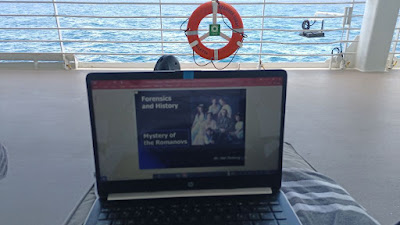 We had lunch in the Windows Café – I had the fish fingers (tilapia) and a salad with “American Dressing”.  I also tried the pizza which was OK (might have been a bit undercooked).  For some reason, pizza is not highlighted on the buffet (the pizzas are hidden in a cabinet near the carving station - very hard to see).  I had a Stella with the meal which improved everything.

From lunch, we went down to the Cabaret Theater to catch John Bressler’s Matinee Show.  He had a great crowd this afternoon.  He played a lot of our favorite songs including a few verses of “Hallelujah”.  He was funny again and the show was terrific. 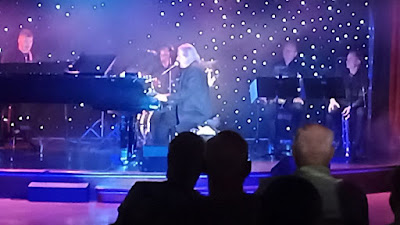 Even though the open deck was windy, we spent most of the afternoon there reading and snoozing (me mostly).  As the afternoon wore on, the ship began to pick up pitch and roll.  Barf bags appeared on the stairway railings.

Tonight was Mexican Night in the Windows Café – we could not find anything that would work for us so we went to Discoveries for dinner.  Before we sat down, we both ordered apricot sours – really liked it and will get it again.  We both had the salmon, which was delicious.  I had a baked potato and some creamed spinach with my fish.  A Cesar Salad started off the dinner.  I had the Strawberry Cheesecake for dessert.  A very tasty dinner.  Armando is our new waiter, and he is very good especially when it comes to modifying dishes to remove what we can't eat.  I asked Armando if the French Onion Soup on the menu could be make vegetarian and he said it could, but it would be available tomorrow.

I also had a discussion with our waiter about the possibility of ordering the veggie version of their onion soup for tomorrow night.  He said he would set it up and all I had to do was to let them know when we came in tomorrow.  We’ll see how that works out.

While we were at dinner, CD Danny announced that the production show “Come Sail Away” would not be performed tonight because of the motion of the ship.  Instead, it would take place tomorrow and tomorrow’s show “Moving Through the Movies” would take place tonight.

It is hard to find a good club soda on board but our waiter in the Discoveries Bar found me some.  We got to our favorite seats in the theater (next to the spot operator) – we also chatted a bit with Tanya and I shared an update on my talk earlier in the day.

“Moving Through the Movies” involved CD Danny Turner singing songs from various movies – he gives a little background on the movie and the song and then scenes from that movie provide the background for his singing.  He started off with songs by Johnny Cash. 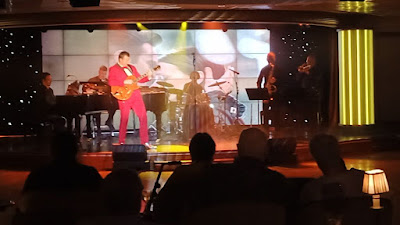 He did "Moon River" from "Breakfast at Tifanny's" and 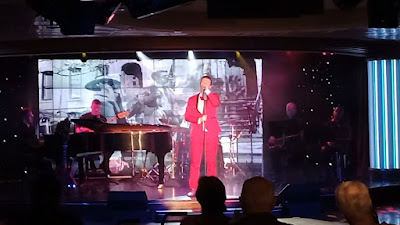 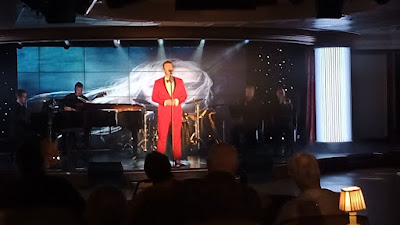 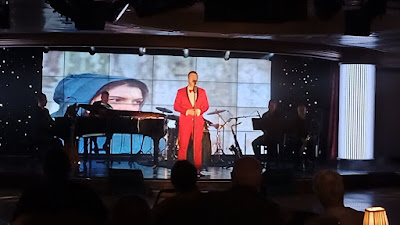 The show was Ok – it reminded me of what Steve F does with his Broadway Musical shows and lectures.

The ship was now really moving so we went to our room and the relative safety of our bed.

It’s going to be a long and bumpy night.