It was indeed a bumpy night.

Because we are in port today, the Windows Café opens at 7:00 AM.  I was up there a little after opening and I decided to sit inside (it was already warm on the back deck) so I took the very first window seat by the coffee machines.  Very distant and with the best view of the sail in. St. Thomas is in the distance in this shot. 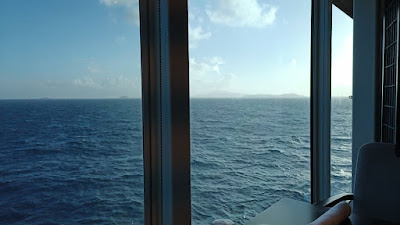 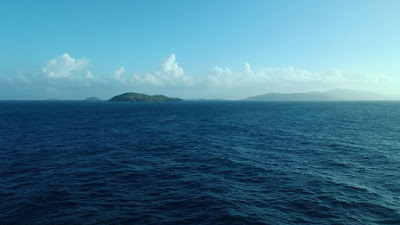 Breakfast is my favorite meal on ships and I really look forward to that first breakfast up in the buffet.  I found out pretty quickly that the breakfast process is a little different in the new world.  There is no self-service in the buffet, which makes sense.  I asked where the waffles were and I was told that they would make me one and deliver it to my seat.  The crew member takes the order, asks where you are sitting, then gives you a metal "centerpiece" that holds a card with your order number on in that you place on the table (like the Corner Bakery back home). I was dispensed some cottage cheese and preserves (which are now in tubes that resemble caulk tubes); the girl working the jams couldn’t get the stuff out of the tubes so she got help from one of the guys, who detached the tube from the dispenser and squeezed me some by hand.  I inquired about sour cream and that was also brought to me.  We are also not allowed to get our own coffee (I learned the hard way) so I asked for two cups of decaf with milk and they were brought to me piping hot.  I also tried their oatmeal, which was very good (they have a different kind of brown sugar on board but it works). While a little more complicated and a lot safer, the breakfast was delicious and monotonous as always.

Ellen went up after I got back and I joined her later for some more coffee and a little of their muesli, which I really liked (like a dessert version of oatmeal).   Breakfasts will work out on port days because of the earlier opening time, but on sea days, we will have to see, especially if I am presenting.

We found lots of open loungers on shady side Deck 5 so we spent the morning reading and checking emails.  We have regular phone service here so we can get texts.  Not much happening back home.  I am still reading “Better Off Dead” (60 percent read).  It is not the most exciting or complex Reacher book but it has the usual elements.  It does have a different feel to it perhaps due to the collaboration between the brothers Child.

While out on the deck, one of the largest yachts in the world, “KAOS”, pulled out to go somewhere.  It is 330 feet long and costs $300 million something the owner, a Walmart Walton, can afford. 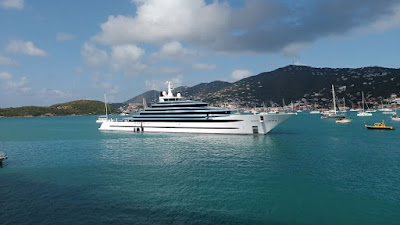 Also here today is the Emerald Princess, docked in front of us. 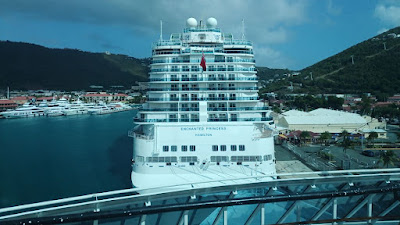 We had lunch on the Windows Café aft deck.  I ordered the tuna and asparagus wrap again but this time it was “well done”.  It was excellent.  I also had a salad prepared from the salad bar and it was also great – the Ranch dressing being the key.  I washed it all down with a Stella.  Ellen had tuna and egg salad from the salad bar and a macaron for dessert.  I tried the cappuccino gelato but I didn’t like it.

After lunch, we were back on Deck 5, where I got terrific shots of the harbor, and the many yachts at anchor, as well as an amazing panoramic shot of Charlotte Amalie. 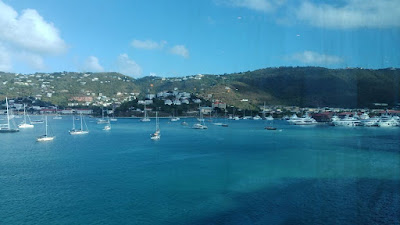 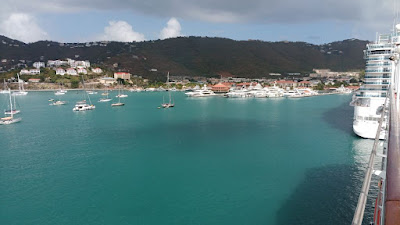 Ellen has a 3:00 PM appointment in the Spa on board (a first for us).  I am back in the room cooling off – it is a little warm out there.

We stayed in the room until dinner time at Discoveries. I had a very nice apricot sour before dinner. I had pre-ordered a vegetarian version of the French Onion Soup.  It was here but it took a long time to come to the table and that made the whole dinner a marathon. The Onion Soup tasted great but if it takes this long to get to the table, it might not be worth the trouble. We both ordered the Penne Pasta with cream cheese sauce and mushrooms plus two appetizers.  Ellen had a salad but the arugula was bitter, and I had the Satay with Rice – OK.  The pasta arrived at near 7 PM and it was quite al dente but OK.  We did not stay for dessert but instead went to the Mosaic Café for Lemon Meringue Tarts and coffee and tea.

The seas are smoother so the production show “Come Sail Away With Me” can now go on. The show was a travelogue (even using postcards to highlight the locations of the various musical numbers). Lisa Louise Wilson and Calvin Hudson are the lead singers. 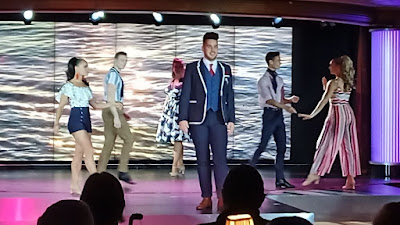 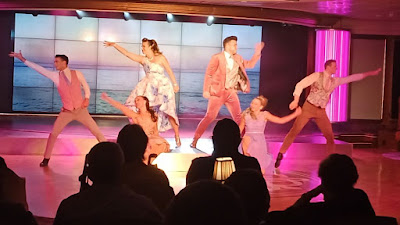 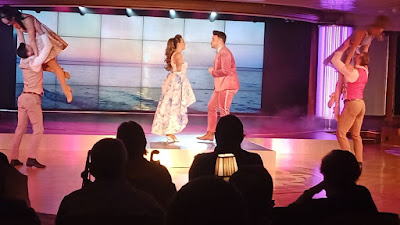 They both have good voices but sometimes, Lisa’s take on certain songs was unusual. The songs were all familiar e.g. “I Love Paris”. 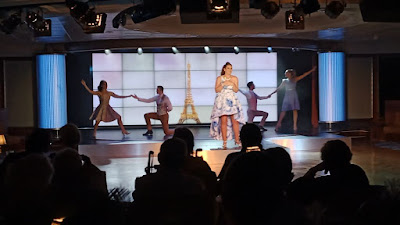 The dancers performed a tango of sorts when Argentina was visited but in the India segment, I just didn’t understand why “Diamonds are a Girl’s Best Friend” represented the Subcontinent (I was expecting a Bollywood number). 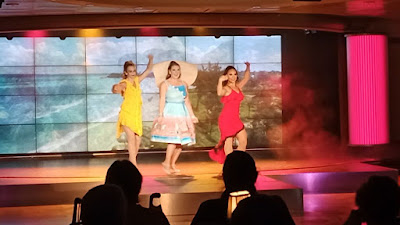 The finale consisted of “Wonderful World” sung by the two lead singers. 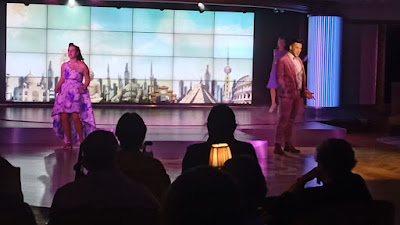 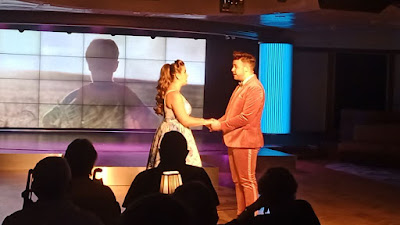 The show only lasted about 40 minutes.  It was a pleasant and entertaining show.

Back to the room to read and settle down – seas are still choppy.