The earplugs did indeed cancel the engine noise and I did sleep a little better.

I was still up early enough to see the sunrise 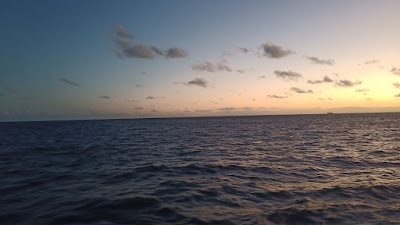 as well as another cruiser headed the other way - perhaps back to Florida. 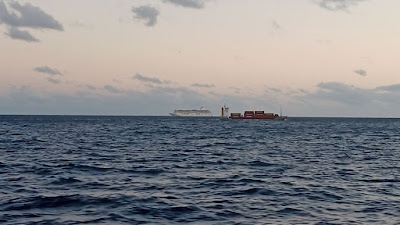 We ordered room service because my first talk today is at 9 AM.  The food arrived on time around 6:45 AM.  We both had waffles.  Ellen had eggs and I had cottage cheese; I had also asked for sour cream but got butter instead.  I also had a bowl of oatmeal.  The food was OK but I should have eaten the waffles earlier because they got cold quickly.

There were only four people at no AV guy when I arrived at the Cabaret Lounge at 8:45 AM for “Crime Scene Investigation: Forensics on Television”.  The AV guy showed up a few minutes later and I got all set up.  I spoke to some of the people in the audience, two of which had seen me on a Celebrity ship (maybe the Equinox on a crossing in 2013).  By the time I got started there were about 25 – 30 people there (considering the early start on sea day #1, I was happy with that).  I got a short introduction from Tanya and I was off and running.  I felt my timing and delivery were good today and the talk finished at about the 48-minute mark.  A few people talked to me while I was breaking things down and we got out of there before the Future Cruise talk started.

It was quite a bit warmer on Deck 5 today – what a difference a few degrees of latitude make - so that’s where we were until lunch.  I also will opt for being outside whenever possible during these COVID times.

Lunch in the Windows Café was pretty standard – salad bar, tuna on a roll with onion rings, and a Stella (which I can never finish).  Ellen had some pasta and some teriyaki salmon.  I tried the Cod Fish Fritters, but I stuck with the tuna salad.  We had nice seats on the back patio.

Trying to finish “Wanted Man” so we were out on Deck 5 pretty much all afternoon.

Dinner was in the Discoveries Restaurant, where we have been successful in distancing ourselves from other guests. I had the potato and goat cheese appetizer and the fettucine pesto minus the Italian Sausage.  The pasta was quite good and the chef continues to work with us to remove the meat items from what would be perfectly OK for veggie folks.  Ellen had the halibut just grilled and I think she liked it.  We passed on dessert.  Instead, we had dessert (frozen yogurt or soft serve and toppings) up in the Patio Café.  It was the first time we could serve ourselves since we boarded these cruises.

I caught the sunset tonight. 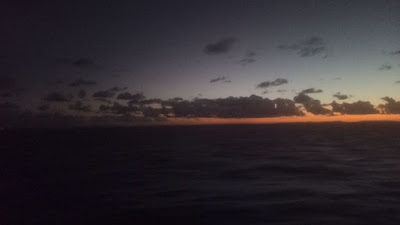 We passed on the Show tonight (Jakub, the violinist) and instead went to the Living Room to read.  Deck 9 was all lit up and begged for a picture. 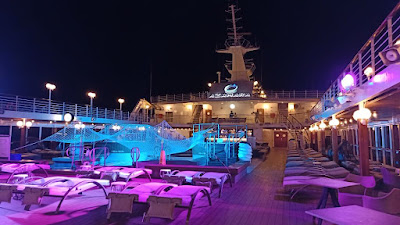 Our safe place in the Living Room is a couch by the window on the starboard side. I did finish “Wanted Man” – I found it to be an overly wordy book and I was not that happy with the ending (I never like it when likable characters get killed off).  I have one more Reacher book I got from the library – I’ll start that tomorrow.

We are still having trouble with temperature control in our cabin.

Clocks move forward one hour tonight to put us on Atlantic Time for our next port, Castries, St. Lucia.