COVID.  On your own in this port – carry sea pass card and vax card.

Not a great night and not due to the slight chop.  There is never a clear reason when you don’t have a good night – maybe, too much water, something with the food. Who knows?  In any event, I didn’t get a lot of sleep.

Didn’t make the 7:00 AM breakfast bell but I did limp up there shortly after.  Didn’t get my usual good seat but I did get one just as scenic.  Had the waffle combo with some oatmeal.  I did get the sour cream again but this time a whole cereal bowl’s worth.  I told the server that just a little bit would do the trick.  The breakfast was nevertheless great, and I did get a nice view of the sail in.  There are other ships here today as the Quest pulls alongside.

Before all the ships arrived, I took a panorama shot of the harbor.

Also visiting Antigua today are the Grandeur of the Seas, Celebrity Millennium, and MSC Sea View.  There will be a lot of people in the town today. Later on in the day, a fourth ship joined the group, “Spirit of Adventure” (a small British Cruiser). 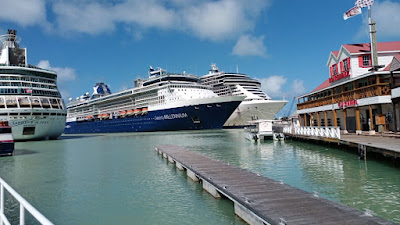 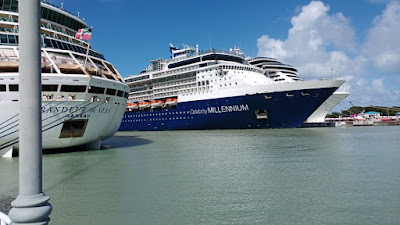 At 10 AM, we gathered our sea pass cards, our vax cards, and our driver licenses and headed to the gangway on Deck 3.  We scanned out and started for the town.  The winds in the breezeway between the Quest and Grandeur OTS was really brisk – Bernouilli’s Principle at work. 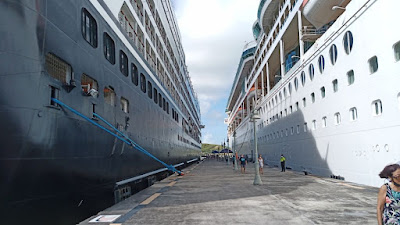 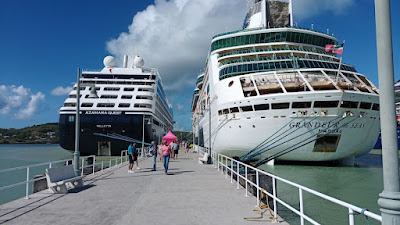 At the end of the pier, there is a small Security Station and then you enter a shopping area and the city of St. John’s.  They might have taken our temperatures but no one asked for vax cards. 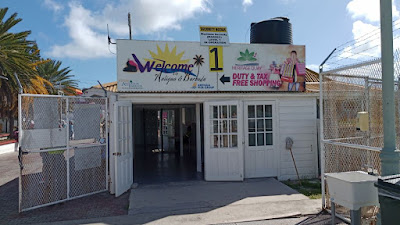 The locals were all wearing masks, some better than others, and the entrance to all the shops we went into had had sanitizers right at the door (with signs that pointed them out).  I was looking for a baseball cap and Ellen was looking for a magnet.  We did find a magnet for $3 (BTW the exchange rate is 1 East Caribbean Dollar = 0.37 USD).  Most of the items had both USD and ECD prices so no math skills required.  Ellen did pick up a very colorful mask that she was told was very effective by a guest on board.  We also spotted a tree made out of empty booze bottles - Antiguan art. 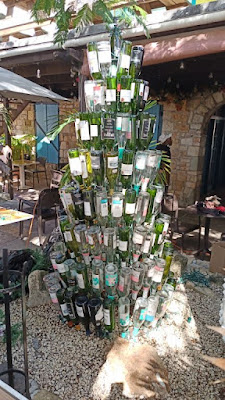 To document our visit to the shopping area, Ellen took a picture of me with and without my mask against a pretty interesting tree. 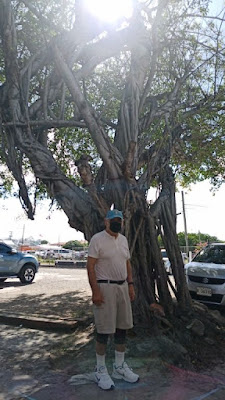 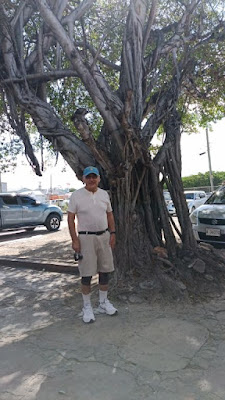 We walked along one of the main streets abutting the shopping complex – lot of locals and cars squeezing into the narrow streets. 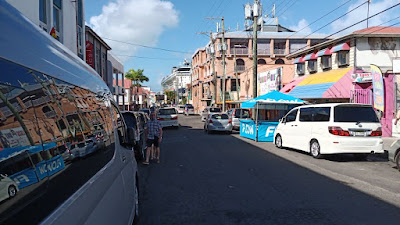 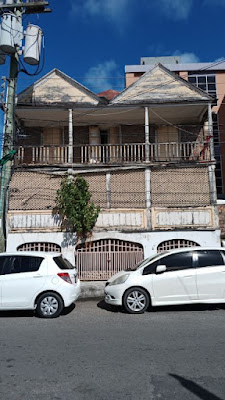 The sidewalks were in bad shape and you needed to look down to make sure that you weren’t walking into a pothole or worse.  Restaurants were open offering both full menus and special items like soft pretzels and Belgian waffles (yes).

We went into a general store looking for Advil and Tylenol since we had left these home by mistake.  The clerk, a masked young woman, was very courteous and showed us the meds but they were pretty pricey, so we passed.

The temperature was warmer than forecasted and I was started to sweat through my mask so we started back to the ship.  Ellen sprinted back to the breezeway to get into the shade. 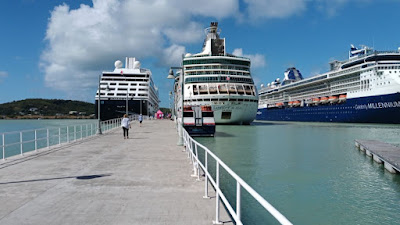 We went on the Window’s Café deck and waited for the place to open.  Lunch was the usual except I had a Cesar’s Salad along with my tuna and egg salad scoops.

The afternoon was spent on Deck 5.  The deck facing the Grandeur of the Seas was closed – there wasn’t anything going on that side of the ship so the reason for the closure was unclear.  We did have a nice view of part of the island and the Caribbean.

I had ordered a special meal for tonight in the Discoveries Restaurant.  I asked the Maitre D if the chef could make me spaghetti marinara and he said that would not be a problem.  I had a green salad along with the meal and the whole dinner was very good.

Tonight’s Showtime is the second appearance of Branden and James, who wowed the audience last time.  Branden started off with some opera but transitioned into “This is the Moment”. 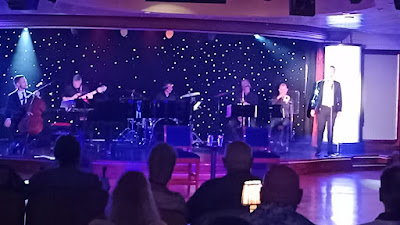 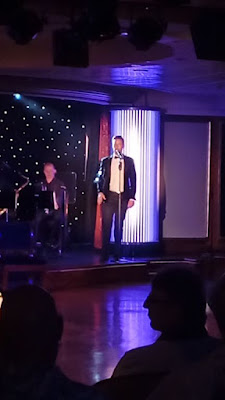 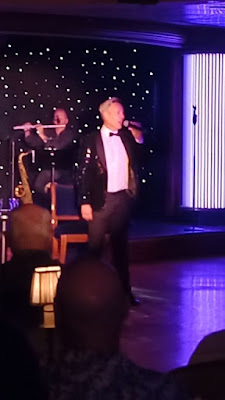 He accompanied himself on “Hotel California”.  Also, on the program today was “Hallelujah” with Branden on voice and piano and James on the mournful cello. 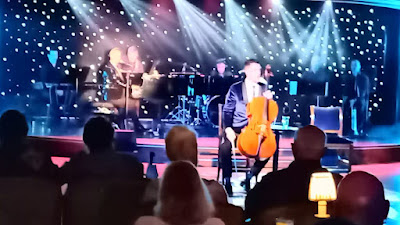 Great version.  They also did "Let It Go" from "Frozen" - another great number. 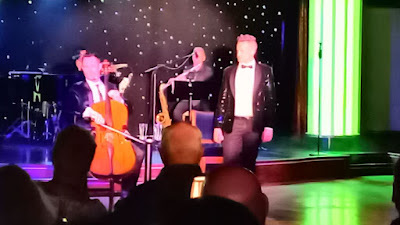 A medley of songs from “Phantom of the Opera” followed with some of the pieces strictly instrumental (Cello). 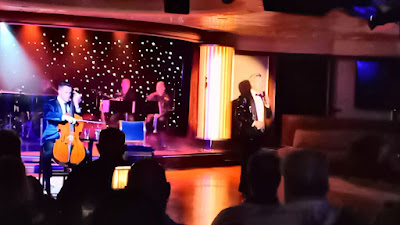 The program ended with some Christmas carols – Branden sang “Silent Night” in French and was joined by Tanya Roberts in a decibel bursting rendition of “O Holy Night”. 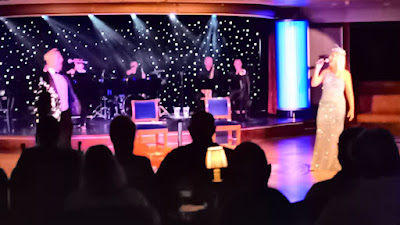 Two huge voices combined – it was massive.  The boys gave us some more information on their background – Branden James is from Orange County California and James Clark is from Adelaide, Australia.  At one point, James went to Bible School near San Antonio Texas.  I should mention that James reminds me of Jonathan Scott, the burlier Property Brother.

We watched MSC Sea View depart in the gloaming. 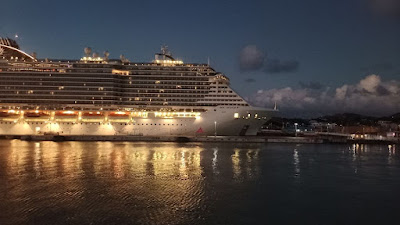 Quest was the third ship to push.

We went back to the room to relax.  Getting off the ship for a brief time almost made things seem normal.