Today, we are off to Miami FL where, tomorrow we are boarding Azamara Quest for a back to back cruise which includes both the Holidays and New Year’s Eve.  We did the New Year’s Eve Cruise a few years ago and the ship put on a fantastic evening.  Even with COVID, I am expecting that the celebration will be as grand. As a side note, we haven’t been on an Azamara Ship since 11/2017 when he did a crossing from Barcelona to FLL on the Quest.  There have been a lot of changes on Azamara since that voyage. In fact, there have been a lot of changes everywhere since then.

Our flight this morning, UAL1555, departs ORD at 10:45 PM so the taxi is scheduled for 8:00 AM; that might be a tad early but today we are not checking out bags (no status at United) and we might have to cross under the tarmac to get to our gate.  Also, we don’t know about traffic or how long the TSA Pre-Check lines are – we are factoring all of this into our schedule.

Our driver was right on time – the same guy that picked us up last time and just like last time, he was not wearing a mask.  That resulted in a smaller tip for him because Chicago does have an indoor mask mandate and that goes for transportation like cabs and Ubers.

We broke the Wheeling/ORD land speed record by getting to Terminal 1 in just under 12 minutes.  So, in actually, our driver beat his own record.  Not a very helpful driver – he didn’t rush over to help me with the bags and at the airport did not help again.

Terminal 1 wasn’t very crowded this morning.  We didn’t bother with printing any new boarding passes and just used the ones I printed at home.  There was literally no one in line at TSA PreCheck and our bags (full of all sorts of legal quantity liquids and gels) did not attract the scrutiny of the TSA folks.  We dragged our bags over to Concourse C (going underneath the tarmac) and to our gate, C19, the first gate next to the escalators.  We found seats next to the window so I could watch the planes come in.  There was already a plane at our gate and I thought it was ours (which according to the UAL app had come in from Jacksonville, FL).  After taking pictures, that plane pushed and was on its way somewhere.  Our plane arrived just a few minutes later and it pulled in – an Airbus A320.  Always good to see your aircraft at the gate. 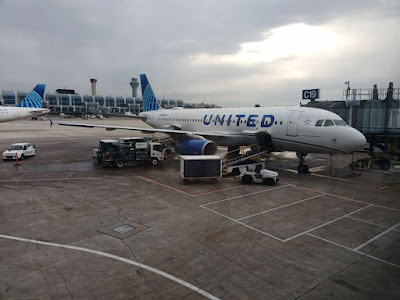 I wanted to get some coffee – I didn’t see any Mickey Ds down both ends of our concourse so I tried the mini-food court across from our gate.  They only had regular coffee and I wanted an iced mocha.  I did find one (for $5.53) at Brioche Doree (fancy, no?). My drink was OK but Ellen did not like her Green Tea Ginger hot tea.

The plane was scheduled to board at 10:15 AM but at about 9:45 AM, the desk agent said that every seat in the plane was taken and said she was looking for volunteers to check their overhead bags for free.  Well, I was first in line and our two bags were checked.  I don’t think very many passengers took her up on the deal as she made the announcement several times.  No matter, our bags were tagged and on their way to Miami.  That really simplified things as now I only had my computer bag to deal with.

From the lounge I could tell that the pilot and copilot (a woman) were both wearing masks in the cockpit.  That seems smart considering how difficult it is to distance in the cockpit. 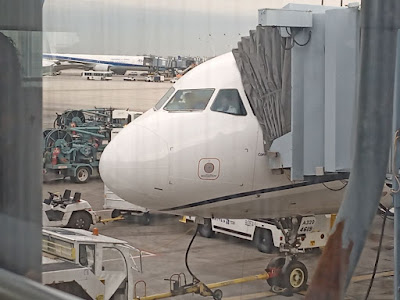 We started boarding 15 minutes early; we were in Group 4 (next to last) – the boarding was pretty orderly and I did find a place in an overhead bin to stash my bag.  We are in exit row seats 20C and 20D – aisle across.  I did not have a big person who overlapped their seat next to me – a good thing.  However, he chatted with his mother the whole flight and I was trying to catch a quick cat nap. It took a long time to board all 200 plus passengers and some last minute maneuvering to find a place for some bags that weren’t checked.

Mask compliance at the airport and on the plane was good.  I heard one flight attendant ask a passenger to pull up his mask over his nose.

The pilot asked the flight attendants to stay in their seats on the climb as incoming flights had experience chop.  The plane pushed on time and took forever to find the active runway and get in line.  The takeoff was actually pretty smooth and in a few minutes we were above the clouds and into the blue.  For a while, the plane was skimming the cloud top so there were a few bumps, no big deal.

We had brought along bagels with lox and cream cheese and I had one with two cups of coffee (Illy) and a glass of orange juice.  All good.

The UAL App has a very good flight tracking system and so I could see the route and progress.  The flight, fairly smooth, took about 2 hours and 40 minutes with our plane arriving at the gate about six minutes early.

We made the long walk to the baggage claim area and our bags were one of the first ones to hit the carousel.  We went to the “Hotel Shuttle” pickup location and called the hotel – the shuttle, we were told, was on its way.  What we didn’t know was that the hotel was a good 30-40 minutes away and that traffic would make that an even longer ride.  The shuttle did finally arrive and took us and a mother and child to the hotel.

The Residence Inn Miami Airport West Doral is indeed quite a way from MIA.  We checked in and took our bags to the room, 410.  The room, while close to the elevator is on a different wall so we don’t hear any elevator noise.  The room is a studio with a separate sleeping area with a mini-king bed, a separate kitchenette, separate sitting area, closets, and a spacious bathroom. 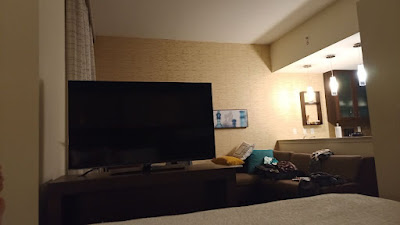 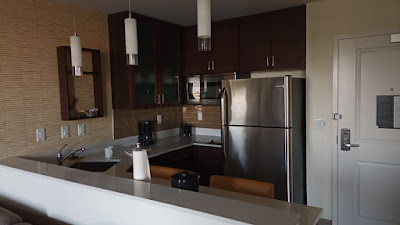 The hotel was built in 2015 and is still in good shape.  One could live in this place – in New York, this studio would be in the range of $2000 a month. The room also gave us a nice view of the surrounding area including aircraft approaching MIA. 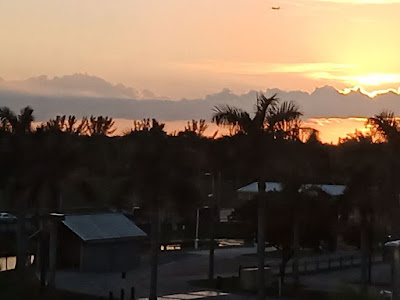 We had originally planned to find a nice Kosher restaurant but after looking online for a while, realized that that wasn’t going to work.  Instead, we took the hotel shuttle to “Downtown Doral” because we were told by the desk that it was a nice section of town with a lot of good restaurants.  The shuttle battled nasty traffic and got us to the restaurant area.  We walked the entire area and checked out the restaurants – we found one that had some nice offerings but they had no more outside tables and no one was wearing masks at the tight indoor tables.  There were also parties going on in the place and the noise was too much. The area also had some very nice holiday decorations including a menorah and Chanukah display in one of the alleyways. Here are some shots of the things we saw on our walk. 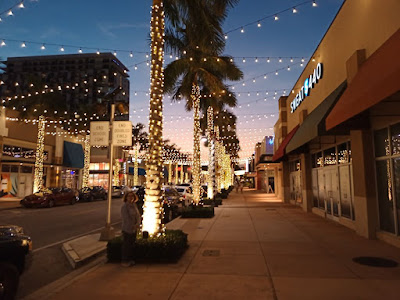 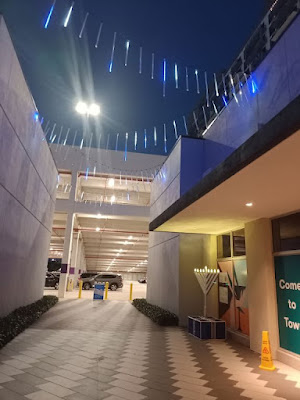 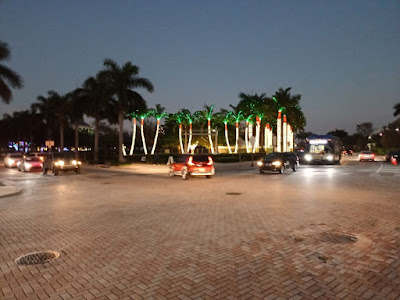 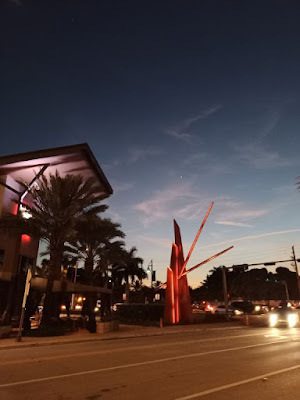 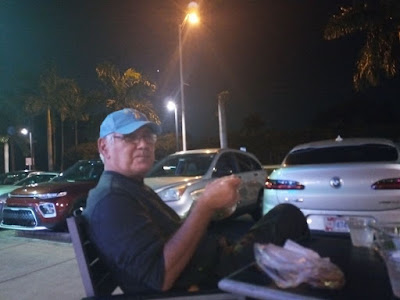 The staff was nice and eating outside (it was in the low 80s still) was great.  The owner came out and asked us if we needed more water and then offered us some freshly baked chocolate chip cookies (on the house).  The salad (more that I would eat at an all you could eat place) and the cookies were great.  It was a nice evening.  I submitted a 5 Star Google Review for the restaurant.

I called an Uber to get us home ($7.02 – including a “booking charge” – a pandemic construct).  We were back in five minutes.  We sat outside off the pool area until someone decided to smoke so we headed back to our room.

We read and lounged for a while before calling it a very long day.

The room is very comfortable and quiet – hope it stays quiet all night long.