After some back and forth with the port folks about arrival times, the ship picked up the pilot at 5 AM (I know because I was up and saw the pilot boat) and we were alongside Terminal E at 7 AM. Normally, Quest docks at Terminal J but because of itinerary changes (maybe due to COVID factors, we are at this terminal today).  It won't affect us that much since we are just turning around here for the next cruise. (I took this picture of Terminal E once we got back on board.  Check out the strange architecture.) 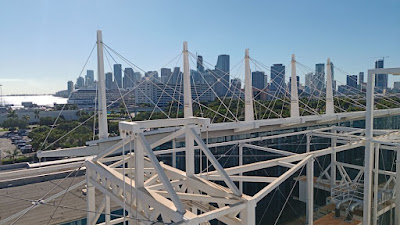 We had to be out of our rooms at 8 AM so we ordered room service (available to continuing guests).  The food, pancakes and eggs, oatmeal, and French Toast arrived on time at 6:30 AM and we were ready to get out at 8 AM.  At around 8:15 AM, Danny, our room steward knocked on our door and said we had to go to our new room.  He put all of our stuff on the cart and we followed him to Cabin 4066, which is on the port side but more Midships.  The room is conveniently located near the aft elevators which go right up to the Windows Cafe. The room is actually brand new (we also found out that no one had been in this room on the last cruise) and part of a refurb at the last dry dock.  It was located in a very narrow hallway near the Guest Services Desk in an area that used to be the Cruise Director/Entertainment Department Suite.  The room had the beds in the right place and the same large window but everything else in the room was a little smaller (just a few percent).  All of the bathroom fittings were new and the toilet was even new.  The water pressure, however, was pretty sad in this room compared to 4014 and the shower was just that much smaller to be tight - I would estimate that the width of the shower floor was just a little over a foot.  The room had its quirks, yet it was bright and new - and cold. 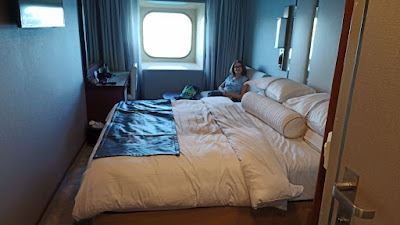 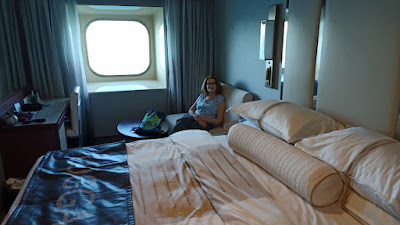 Continuing passengers were asked to meet at 9:00 AM in the Discoveries Lounge.  We received our new key cards and some additional instructions in an envelope. From there, after a short wait, we were escorted by Gita, the Concierge Manager, off the ship.  Our key cards were scanned and we went as a group to Immigration.  I thought this would a quick process as there were CBP agents manning their posts.  We wound up waiting more than a half hour (we were told that CBP wasn’t ready for us) before we went through the passport check (which literally took 10 seconds).  We then marched back to the ship, had our pictures taken and our new cards activated.

Passengers were not due back on the ship until around 3 PM (everyone needed to be COVID tested in the terminal).  Continuing passengers were being treated to a special lunch at Aqualina (the fancy suite only restaurant).  The menu was a special one but there was plenty for us to eat – I had a couple of appetizers, a Cesar Salad, Yukon Potato Soup, and blackened Grouper.  I had carrot cake for dessert along with an Italian white wine.  It was a good lunch.

After lunch, we went back to the room to put away our stuff and found that the room was an icebox.  A HVAC tech came to the room, did some adjusting, called someone on his phone, and said it was fixed.  It did warm up slowly over the afternoon.  The safe didn’t work either and two folks came to fix that.  Perhaps, no one had occupied this room in quite a while.  Everything was eventually squared away, or so we thought.

I visited Guest Services to give them a credit card, activate my internet package, and get my Premium Drink Package sticker for my sea pass card - Daniela, the agent, was very efficient.

I took some pictures of the port area and Miami - it was warm in the Sun.  I watched the Carnival Sunrise depart.  The views from Terminals E and J are quite different, J being a lot closer to Miami. 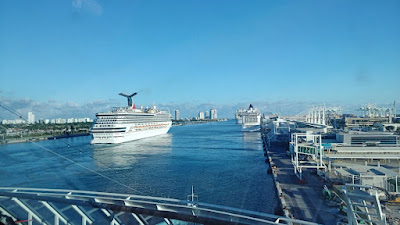 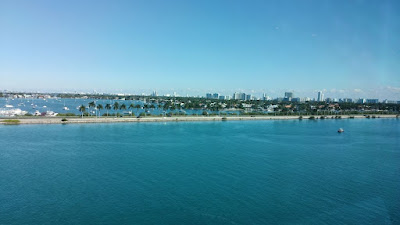 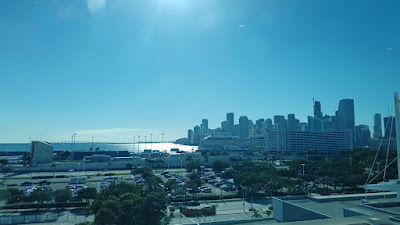 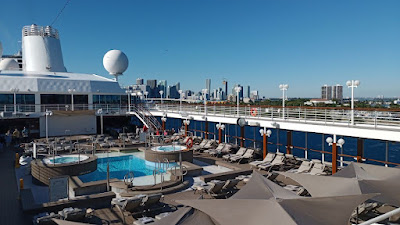 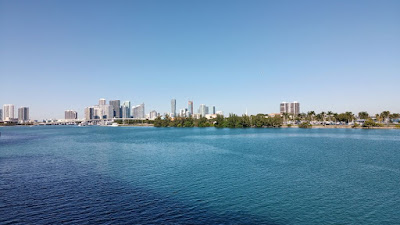 It was too cold to sit outside on the open deck (shaded) and the other deck was being used to embark new passengers so we spent the afternoon up in the Living Room.

We had dinner in the Discoveries Restaurant. Armando is no longer our waiter and our new guy, from Croatia, Tin, is very helpful and accommodating.  He is hard to understand with his mask on so he pulls it down (I wish he wouldn’t) so we will need to wear our masks around him. 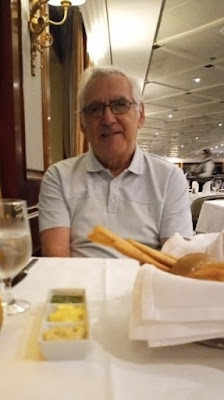 Dinner tonight for me consisted of Vol au Vont, Caprese Salad and Baby Spinach and a specially made main dish, Vegetarian Singapore Noodles (no seafood).  The noodles were quite good.  Ellen had pan fried Sole with no seafood and it was very good as well.  We had our desserts (actually the little treats dropped off in our room) in the Mosaic Café.  I don’t know what the barista did but the coffee was especially good tonight.  A very nice dining experience on the first night of Cruise 2.

From our table, we watched the sail away. We passed the huge, Symphony of the Seas, on our way out to sea. 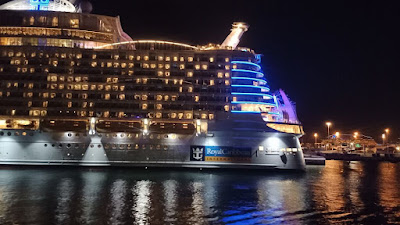 We decided not to attend “Come Sail Away” this time round and spent the evening reading in the mostly deserted Mosaic Café.

We heard that this sailing had 535 guests on board (still a bit short of capacity of around 700).

We went back to the room for the rest of the evening.  Because this room is closer to the engines, we do get a low rumble when all the engines are all running (Cabin 4014 was essentially noise-free).  The noise was handled by earplugs.