COVID:  Guests can move around freely – I wonder if we had to send the authorities the results of our on-board testing.

NOTE: Camo of any kind is not allowed in Barbados.  We have a similar rule in some of the smaller towns in Northern Illinois.

Had a nice standard breakfast in the Windows Café – someone almost removed my magazine and sat at my wonderful window seat.  They looked over the table and tried to figure out what a magazine was doing on the table.  Well, they solved the mystery and moved to a different table - there were plenty of them this morning. I was able to get sour cream again.  I had a spot of oatmeal while waiting for my waffle.  Everything was great.

We are docked at the Sugar Berth.  This commercial port also has the Queen Victoria (told later by the Captain that there are no passengers on board) 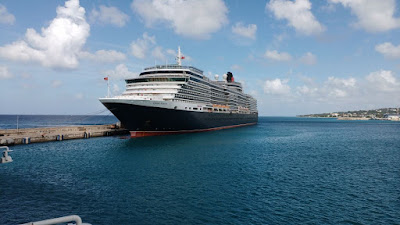 and the AIDA Perla, a huge German ship that looks like a huge Vegas hotel decked out in all colors. 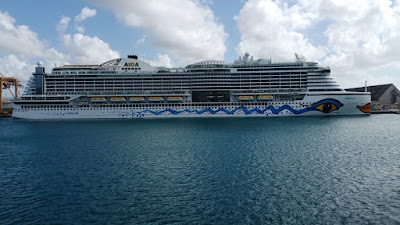 We spent most of the day on the shady side of Deck 5 – I’ve started a new free Kindle Book and I am waiting for the hook.  If I don’t get it soon, that book will be history.  The poor Queen Victoria looked lonely sitting out there with no one coming or going from the ship.  I spruced up the image with an Ellen-Iconic shot. 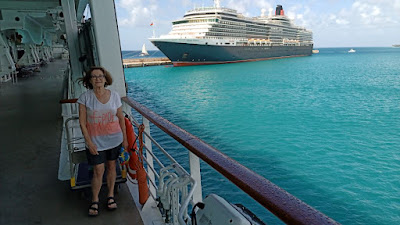 For lunch, I had my well-done seared tuna in a spinach wrap along with some onion rings and a diet coke.  Ellen grazed around the buffet but came back with her usual tuna and egg salad scoops.

The biggest decision for today is how to handle the “White Nights” Party later that evening.  This would be the first WN Party in over two years and the first one in the three months that the Quest has been sailing post pandemic pause.  There is usually not much for us to eat and the party and the lines are long and the whole situation will be complicated by COVID rules on board.  The Discoveries Restaurant is offering a less hectic option but the offerings are limited.  Windows is closed.  We decided to eat at Discoveries and found out that they can prepare some of the items on their usual menu. We both ordered the baked salmon (which, while not exactly the same as their usual version, was fresh and good).  I had a baked potato with mine.  Our plan involved getting dessert at White Nights.

Before, we left we asked to look at the Kosher Menu – we were told earlier that they were pre-prepared dishes but we wanted to check out the offerings.  We wound up ordering special meals for tomorrow – I ordered Pepper Steak and Ellen order a half chicken.  We both ordered the Mushroom Barley Soup.

We got out to Deck 10 around 7:30 PM and found a table at the forward end. This location gave us a great view of the entire pool deck. 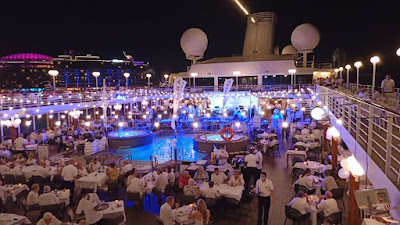 We went down to the dessert station, which this year, featured Nutella filled beignets instead of the usual Crepes Suzette.  I got two of those and some mango topped cheesecake.  Ellen tried a bunch of the cakes.  The desserts were OK and a waiter brought me some decaf. The attendance looked very good with all the tables, while separated a bit, occupied.

Captain Johannes started off the festivities with a little speech but also told us that our one positive COVID passenger, a woman, had no symptoms and was doing well.  I believe he said she had her shots plus booster again confirming that the vaccines do work (in fact, had she not been tested, she never would have known she was infected – not a good thing but that’s why masks are important).  The crew did their usual march around the deck to waiving napkins.

Entertainment tonight was very familiar – we have been to several WNs, and the song list is pretty much the same; that’s OK because they are all dance favorites.  But each WN is still different because each group of singers and dancers interprets the songs differently.  The Quest orchestra was joined by Danny Turner (CD), singers Calvin Hudson and Lisa Louise Wilson, Dustin (another assistant CD) and the dancers, and later on by Tanya Roberts.  The songs included, “Dancing in the Streets”, “YMCA”, “Dancing Queen”, and “It’s Raining Men” among others.  The singers and dancers were at the top of their game and every song was a winner.

A lot of people were dancing and some of them were wearing masks.  It was a bit safer outdoors, but we still wore our masks when we were eating or drinking.  There is still a lot of this cruise left and I wouldn't want to spend it in isolation. 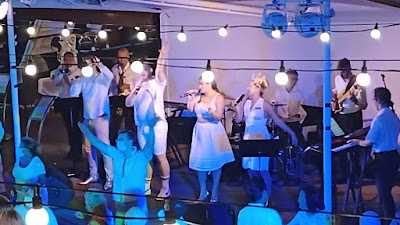 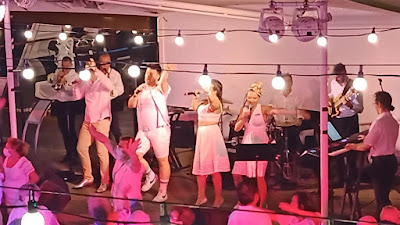 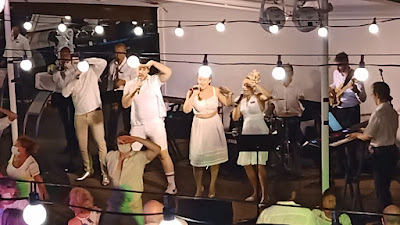 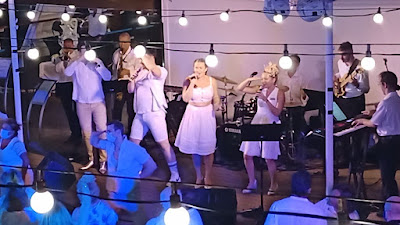 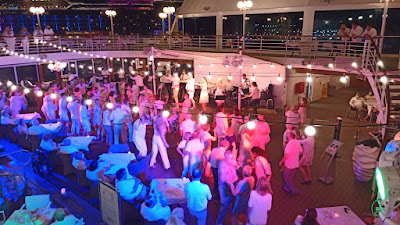 Sometime during the evening, Queen Victoria left her berth and anchored offshore.  There is a story here that we don't know about.  This is very strange behavior for a cruise ship. 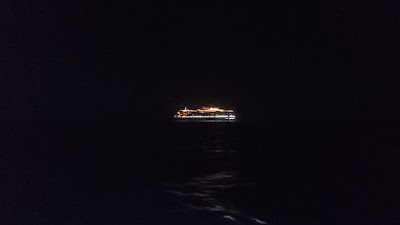 We stayed until just after 9:00 PM and headed back to the room.  You couldn’t hear the party in our room.

The thrusters came on at 10 PM and we were off.