Azamara Quest is really smoking to get to St Thomas on the third day of the cruise.

I was up early enough to capture the sunrise from our cabin window. 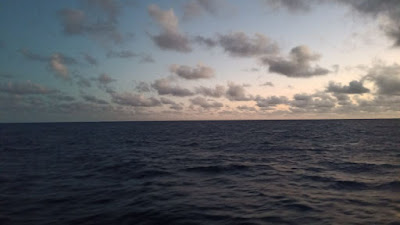 The Windows Cafe Buffet does not open until 7:30 AM so that won’t work for me today and my 9:00 AM talk.  So I ordered room service with a delivery time of 6:30 AM.  The food came at 6:45 AM (within the window) and consisted of two waffles, cottage cheese, sour cream, and preserves (does that sound familiar) and French Toast for Ellen.  Because we are on such a small ship, the food was still warm when it arrived.  The room service breakfast was OK and I was on my way to the Cabaret Theater.

When I got to the theater for my first talk – “The CSI Phenomenon: Forensics on Television” – there was only one person in the seats.  Eventually, there were about 10 people for this first talk – 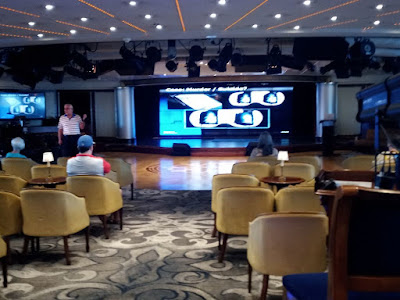 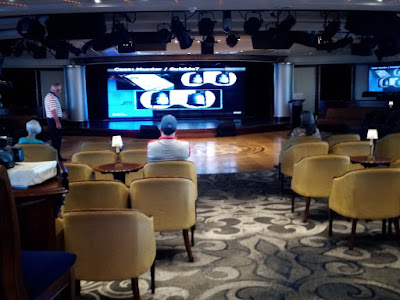 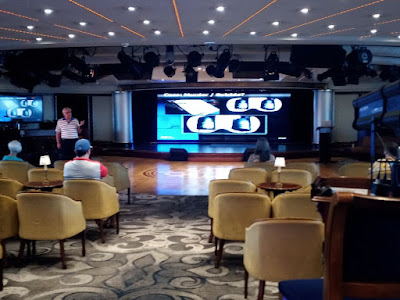 expectations were very low for this because it was early on the first sea day of the cruise and people, including myself, are tired.  In any event, the small crowd seemed to like the talk.  We’ll just have to wait and see how things evolve.  I should mention that, unlike previous stints on Azamara, the speakers do get to use the full stage screen along with the two side screens.  There are some malfunctioning bulbs on the big screen but I can still see the cues.  The talk finished on time (45 minutes or less).  The next talk on shore excursions also had a very low turnout (usually a very popular talk).  Perhaps, the guests on this cruise are not the lecture going type.

With the exception of a 20 kts head wind, the open deck is wonderful and relatively empty.  We will most likely spend most of our time on Deck 5 (shady side) since open air is the best defense against COVID-19.

We had lunch in the Windows Café (Deck 9).  I ordered the spinach and seared tuna wrap and onion rings from the Patio.  It is one of my favorite items on Azamara but I forgot to mention that I wanted it well done.  It came raw and still wiggling so I didn’t each much of it.  I also had a salad from the crew-dispensed salad bar – the Ranch Dressing is really good (can even taste the buttermilk). In fact, guests cannot get anything on their own in the buffet - totally dispensed by crew.  It does move pretty fast, though.  I also ordered a Bloody Mary (too much vodka if you can believe that).

After lunch, we were back on Deck 5.  I am continuing to read “Better than Dead” by the Child brothers.  I got it back from the library and plan to finish it on this cruise.

Other ships are also heading out to the Caribbean - I captured one from the deck. Looked like a Carnival cruiser. 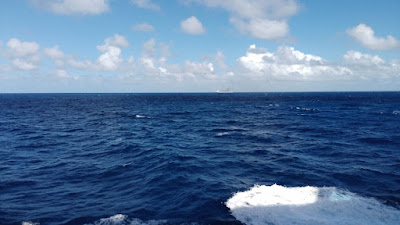 The Windows Dinner process has totally changed.  First off, there is no dinner buffet.  Now, each night has a theme and a limited number of dishes and sides associated with that theme.  Tonight, it was Chinese night and there were no items for us on the menu.  We also decided not to return to the Discoveries Restaurant tonight – just for a change in scenery.  So, our remaining choice was The Patio – a mini eatery just outside Windows by the pool.  I had the veggie lasagna and Ellen had the salmon.  They were OK.  We will need to plan our dinners better.

The Assistant Cruise Director, Tanya Roberts, was the Headliner tonight with her “A Few of my Favorite Things” show.  Tanya is a professionally trained operatic soprano and she has a wonderful voice and stage presence.  She put on very entertaining show.  She did some opera as well as some popular songs. She even put together a duet with her husband, Ned, who is a bass singer with the NY Met (via a fake zoom).  “Anything You Can do I Can Do Better” was a winner.  She also did “Whatever Lola Wants” from Damn Yankees, which was great. 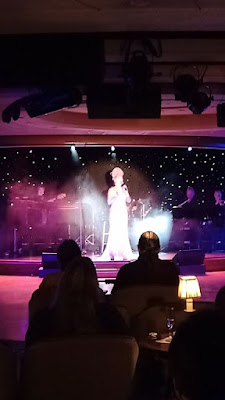 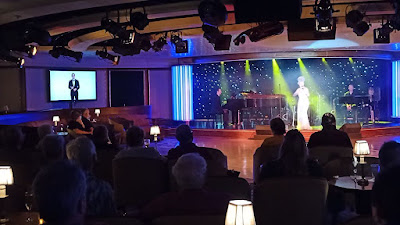 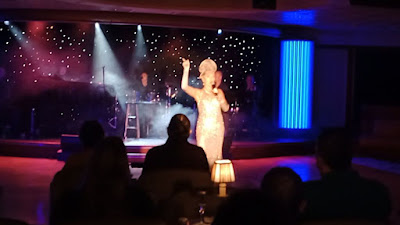 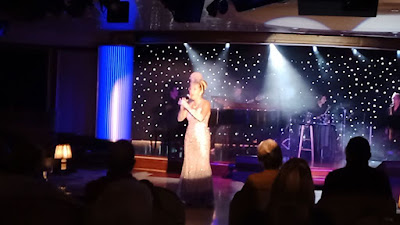 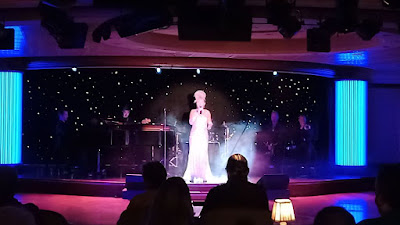 After the show, we went to the room and called in a night.  Clocks moved forward one hour to put us on Atlantic Time.