Another port day, another early opening at the Oceanview Cafe, and another beautiful sunrise. 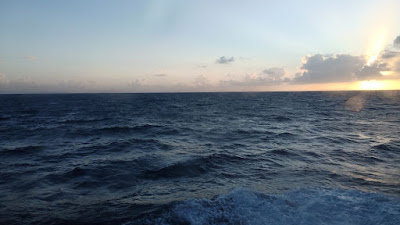 The seas were a little rough, just enough chop to let you know you were sailing. 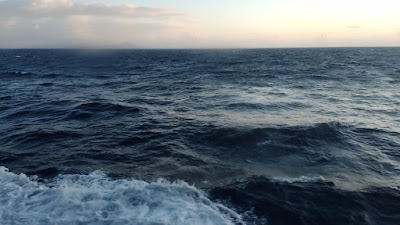 I had another wonderful breakfast (sounds like a broken record but it is true).  It might not have been the waffle combo today but that doesn't matter.

I also had a great view from the Cafe as we approached St. Lucia. 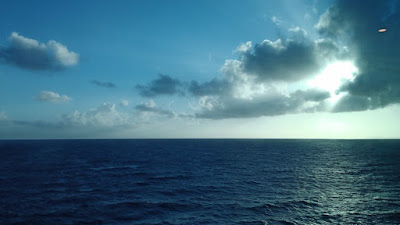 We are docked at the Queen Elizabeth II Pier near the little shopping area.  There are two other ships here today.  The Ponant Le Dumont D’Urville, a small ship with only 184 passengers, looked deserted all day.  I took pictures of the ship and then an enhanced picture complete with Ellen's iconic railing pose. 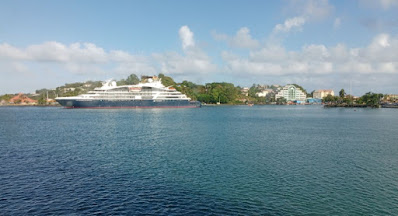 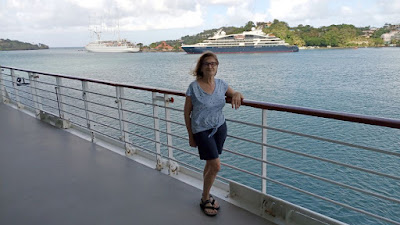 This is one of the four ships that Ponant Cruises has named after French Explorers.

The other docked with us was the elegant Windstar Wind Surf Sailing Cruise ship.  The ship can carry 342 passengers and is one of the biggest sailing ships in operation.  The Wind Surf didn't stay long and departed in the midafternoon.  I captured her leaving Castries. 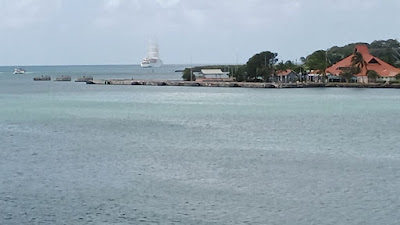 We are not getting off the ship today and are spending the morning reading out on Deck 5. From our vantage point, we did not see any passengers leave or return to the Ponant ship all day.  Maybe, she is, in fact, sailing with very few passengers or crew only.

For lunch, I had the Grill make me a Beyond Burger – it didn’t have a strong odor like the ones back home – it was a little overdone and I only ate half of it.  I also had a very good salad and some tuna on a brioche.  I should also mention that the onion rings are fantastic here, but I can only eat two or three at a sitting.  I don't think this burger was representative of how the Grill makes burgers - I'll try another one down the line.

I finally finished “Better off Dead” – lots of Reacher craziness at the end.  I started another Reacher book I had gotten from the library and read a few chapters before realizing that I had read this book several years ago.  I’ve got other books on my Kindle that I will start reading.

Tonight, was Thai night and there was absolutely nothing on the menu at either restaurant for us to eat.  We decided to order Margherita pizza, Caprese salad (with no tomatoes), and diet cokes from Room Service.  It took about an hour to arrive, and it was, let’s say, disappointing.  We did eat some pizza and buffalo mozzarella cheese and the cokes were good, but we probably won’t be doing that again.

We have seen the performers at tonight's Showtime years ago – they were great then and we have high expectations for a terrific show.  Branden and James (Branden James and James Clark) are vocalists (Branden was a finalist on America’s Got Talent) and pianists – James Clark is also an excellent Cellist. 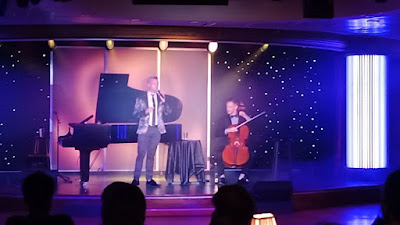 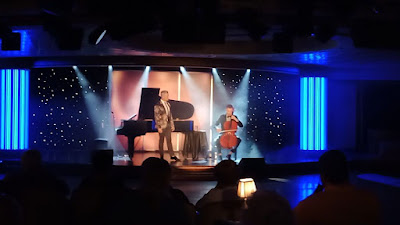 It’s a strange combination but it works.  Branden is an excellent vocalist – he sang “Bring Him Home” partly in French.  This show had a little too much opera and Christmas songs, but I am hoping that their second show will be a little more diverse.

We snuck out a few minutes early to head to the Living Room to hear another session with John Bressler, who teamed up with The Fourth Element party band.  We stayed for a couple of his songs before the band got really loud. 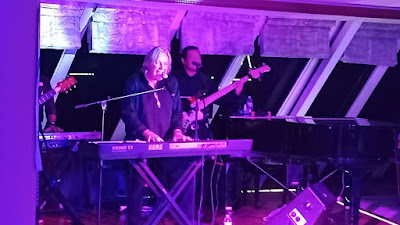 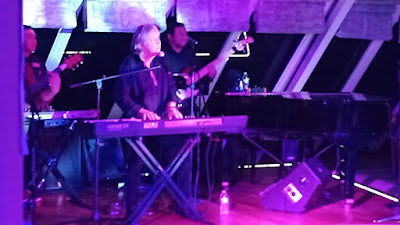 We went back to the room and called it a night.