COVID.  Only people on ship tours allowed to go ashore.

Port Information.  Roseau is the Capital of the Island Nation of Dominica.  Dominica is known for its Creole Architecture.  The Market, once used as a slave auction, is now selling local goods and foods.

We are arriving in Dominica at 1 PM.  Because of the late arrival, my fourth talk." Forensics and History: The Mystery of the Romanovs” is scheduled for 9:00 AM.  The only option for breakfast was room service and my waffle etc plus scrambled eggs came at 6:45 PM.  The room service version is just as good as the Windows Café version.

Today, I dressed a bit differently for my presentation – all of my black socks were sent to the laundry, so I swapped out my dress slacks for khakis and wore white socks with my loafers – in other words, how I dressed in high school or as a member of “Grease”.  I liked the new casual look.

The attendance was minimal, and I suspect that that was due to the White Nights party last night and the early start time (I found out later that people did not like the 9 AM start).  I would say that I had about 20 folks in the seats – Tanya came by and stayed for a while.  I had added some brand-new slides that pointed out Maria and Alexei’s current situation.  Nevertheless, the talk ran 47 minutes, which was good since Chuck Richardson was scheduled at 10 AM.  I don’t believe he had a large crowd either based on what I saw when I was leaving the theater.  The turnout may have been small, but the feedback was positive.

Out on Deck 5, I tracked our course to Roseau on Google Maps. 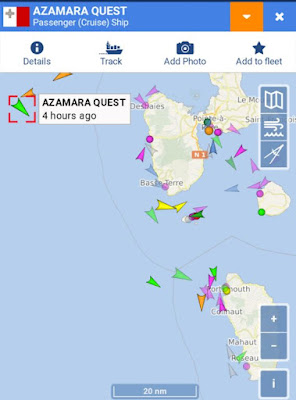 and watched the approach. 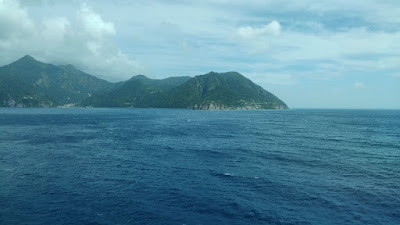 It is our first time in Dominica and the ship is the only vessel here today – the dock, weathered and aged, can only handle one ship and a small one at that. We are docked right along the main street and a small bridge connects the pier to the city.  There are Dominica police at the far end and the ship’s security guards the pier.  The tour buses are the small type (maybe 30 passengers) and they are lined up on the street behind the main street.  The passengers do have to walk a bit to their busses and some wheelchairs were being pushed to their bus. 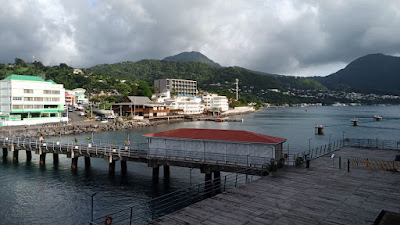 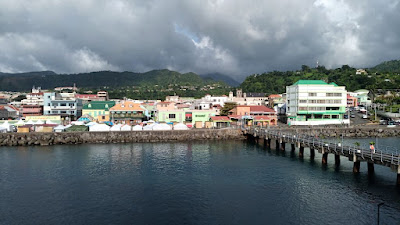 There is a wonderful breeze across Deck 5 and we got two great loungers.  We spent most of the day there, snoozing, reading, and watching people.  We were also treated to several tropical showers followed by great rainbows. 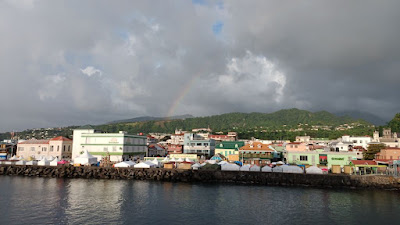 There weren’t many people just walking along the main street.  I did notice that the local police were wearing masks.  I should mention that the police uniforms were very similar to those worn on the TV show, "Murder in Paradise".  I also got a beautiful panorama shot of Roseau.

I had tuna on a brioche for lunch – I tried the salad but didn’t like the French Dressing.

The afternoon was spent on Deck 5 watching the "activity" in Roseau and reading.

We went to Discoveries for dinner and our special meals.

I had the Iceberg Wedge and Blue Cheese salad as a starter and it was very good.

We were told that the meals had their own cutlery – I thought it might be plastic, but the soup came in its own bowl and with its own metal spoon.  In fact, we were also told that the dishes all came in their own dishes (I can’t imagine how these are stored).  In any event, the Mushroom Barley soup was excellent – hot and tasty and served, as I said, in a bowl three times the size of the standard soup bowls.  The main dishes were huge and good.  The Pepper Steak was not Asian (next time, I will ask for soy sauce) but the meat was tender, hot, and good.  The rice was also good.  Ellen’s huge hunk of chicken was also very good but too much for one person to eat.  These Kosher meals were unlike any we’ve come across so far.  We might have them again later on.  We both had sorbet for dessert.

We got our normal seats for Showtime, which tonight featured old friends, Sasha and Dima – ballroom dancers extraordinaire from Ukraine. Sasha looked exactly the same and Dima had grown a beard of sophistication.  Sasha always reminds me of someone famous but, in all the time I have known her, I have never figured out who.  They put on an excellent show. 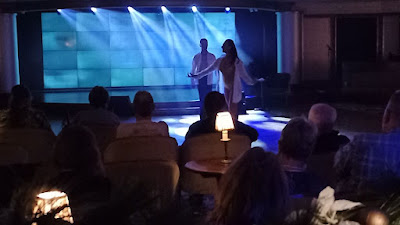 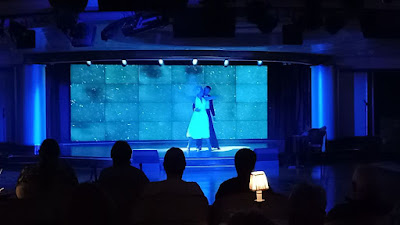 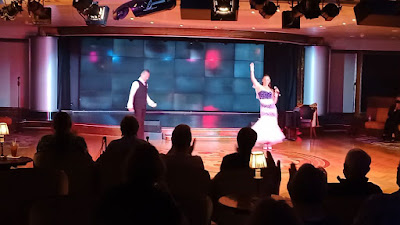 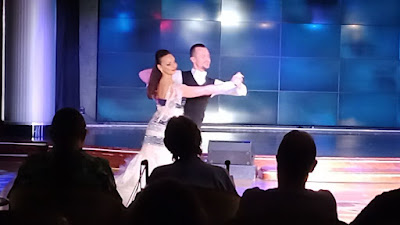 Sasha did a number posing as Marilyn Monroe in a blonde wig. 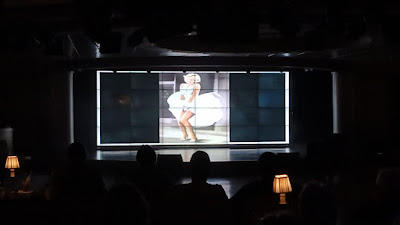 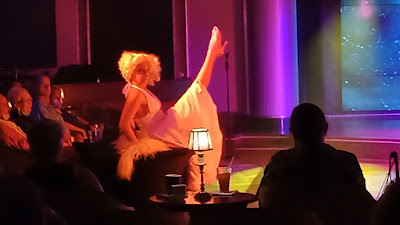 Dima spent some time giving us some insights into his background but neither performer talked about Sasha’s background.  I was always under the impression that they were not married but I could be wrong about that.

After the show, we went out of Deck 5 – the towels were gone and the loungers were roped together but we stayed out there a while to look at the stars and planets.  I did catch the sail away from Dominica. 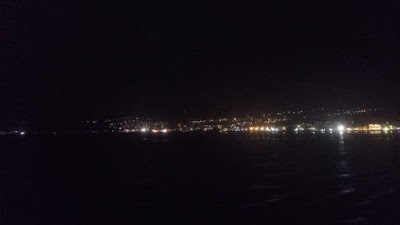 The Captain promised smooth seas for some of the evening.  We’ll see.