The ship did not have to use all her engines to make the short shop to St Maarten so the vibration and noise in the cabin was reduced.  That helped a little in the sleep department.

I watched the approach to St Maarten and the docking process to the Philipsburg Cruise Terminal - complete with my reflection - from our cabin window. 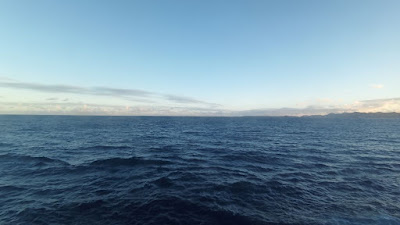 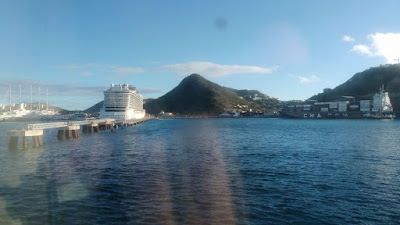 We are actually on tour today – “Orient Beach Rendezvous” – has a meeting time of 9:15 AM so we have to order room service.  Our 7:00 AM delivery included two eggs and two pancakes plus oatmeal for me.  Ellen ordered a basket of pastries and two eggs.  Some of those pastries would be eaten on the trip if we got hungry.

We met in the Cabaret Lounge and left just about on time.  As we waited to walk over to the bus pickup area (where you would get the cabs), 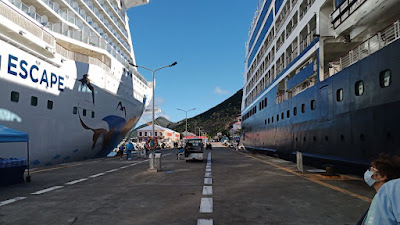 I could see that we were joined at the port by the NCL Epic and NCL Escape, the Symphony of the Seas, the Jewel of the Seas, and the Windstar Wind Surf. I guess this port is dealing with the pandemic. 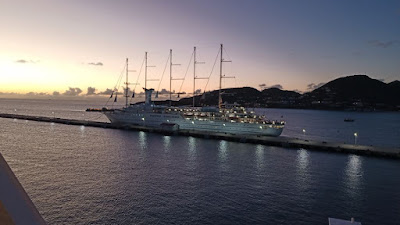 When we approached the port, I saw another ship out in the bay; it looked like the Grandeur of the Seas, 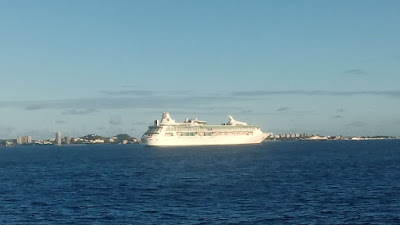 and I guess it was either anchored or waiting for clearance to dock.  A later check indicated that it was not scheduled to dock at Port St Maarten.

We had about 20 people in our group, and we got in the bus and socially distanced as best we could. Masks were required on the bus and guests were very compliant. 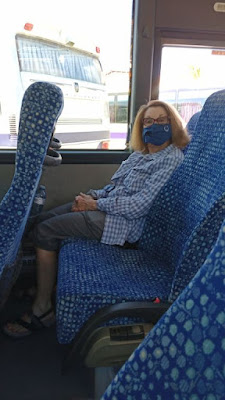 The bus seat didn’t lock in the upright position and the pitch was Jet Blue like.  We headed through the city of Philipsburg 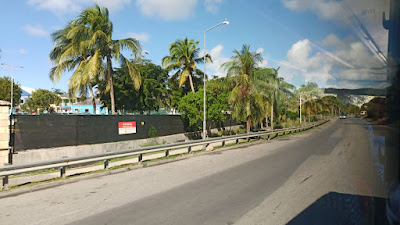 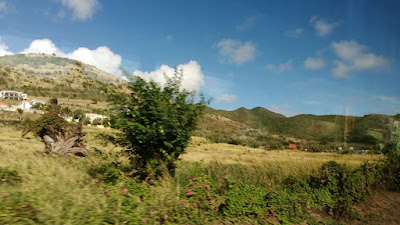 and made our way to the French side of the island.  In about 20 minutes, we arrived at the Orient Beach complex – besides the beach, there are condos and rentals behind a gate. 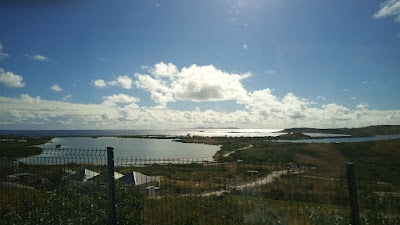 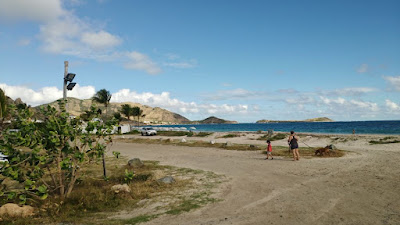 We had our own area at the beach and Ellen nimbly got two loungers right next to the water.  The loungers were distanced, and we were outside with a good breeze, so we were OK.  I tried to read but the light made it difficult to see either my Kindle or my phone. No matter, the views of the beach were enough for me - the people watching was a bonus. 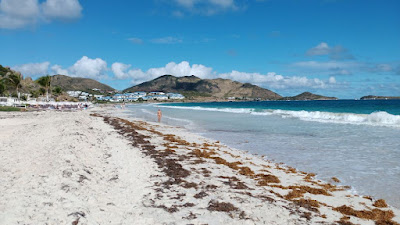 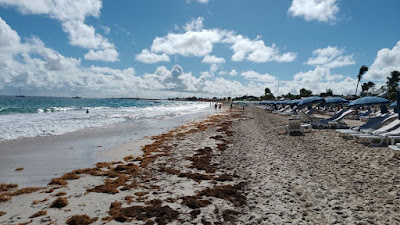 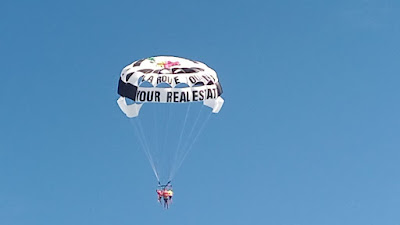 At 11:15 AM, our guide fetched us for the included lunch at the KKO Restaurant. 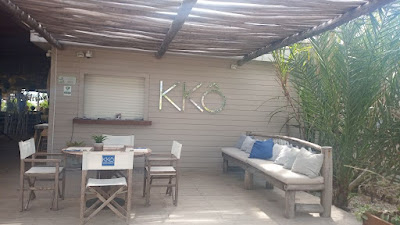 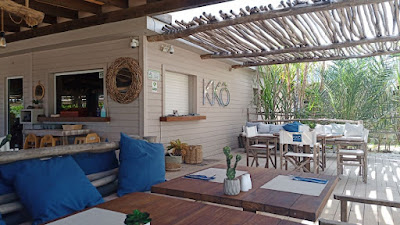 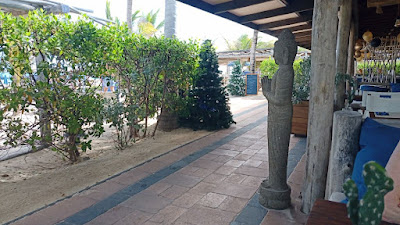 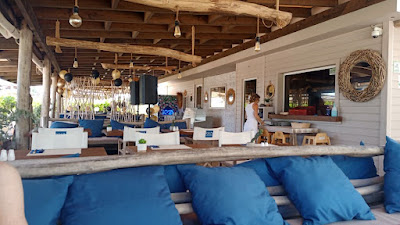 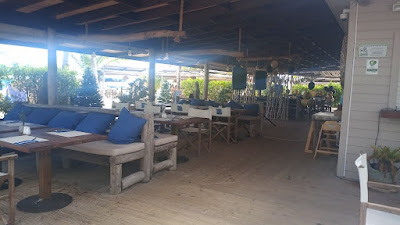 The group was getting chicken but the chef made us a special grilled Mahi Mahi with rice and veggies.  The first course was watermelon-tomato gazpacho, 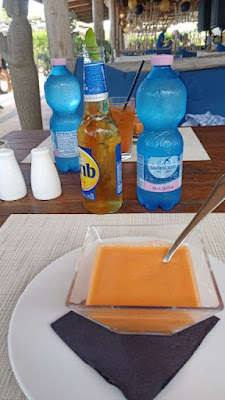 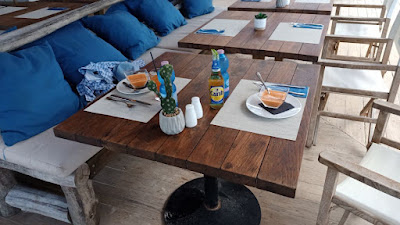 which was an unusual orange color but was very good.  While the portions were not very large, the fish and veggies were very good – the plain rice not so much. 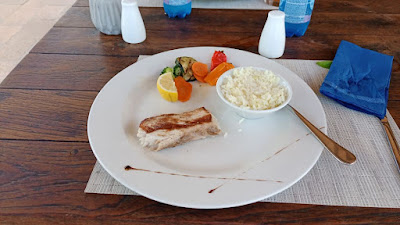 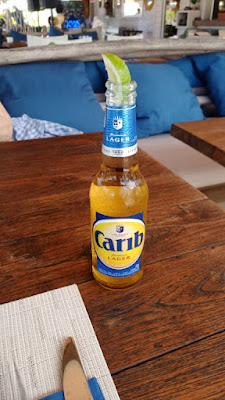 with my meal and Ellen had the rum punch.  There was an open bar, but we did not really take advantage of that.  For dessert, we had a fruit topped custard which was very good. 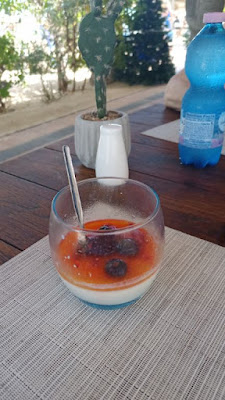 The restaurant, part of the KKO Beach complex, clearly catered to the affluent folks who came to stay at the beach.  The servers were young and tanned and all had an adorable French accent so it was like being at a beach in France.

After lunch, we went back to the loungers – I still couldn’t read so I watched the waves and people.  Orient beach is known as a clothes optional European Beach but there were only a couple of people exercising that option and they were some distance away up the beach.

Before we left Orient Beach, I got a nice panoramic shot of this beautiful venue.

At 2:30 PM, we got back on the bus and took a very bumpy ride back to the port – it was the same road but for some reason, it just seemed more uncomfortable.

Once back on the ship, we got cleaned up and went up to Deck 10 Aft for dinner. Many of the other ships had left giving us a great view of the Cruise Terminal.  Later, after it got dark, someone put on a light show on the hill to the right - a big time party I would imagine. 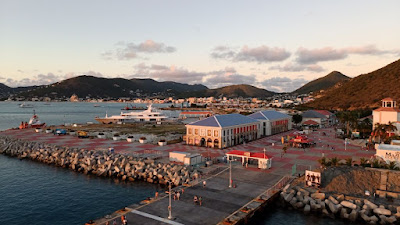 Tonight is the “Destination Celebration” Event and because we have more people on board for this second cruise, there were two shows – 5:45 and 7:45 PM.  We were scheduled for the second show.  Last night we ordered Kosher Meals and Ellen used her Jedi Powers to get them to deliver the meals up in the Windows Café.  Ellen had chicken schnitzel and I had beef stuffed cabbage.  Our dinners were disappointing for several reasons (for example, there was no sauce with the stuffed cabbage).  I did have another frozen Sangria which was good once remade to be sweeter.  We stayed up on Deck 10 and decided that we would not go to the show as we had already seen it.

Instead, we went down to the Den and listened to Valentyna do her piano set.  She was very good tonight, and we got a very nice and distanced table at the back of the venue (it was the first time I could actually see her play and sing - our past seats blocked our view of her playing).

While we were at dinner, the Wind Surf moved to the berth alongside us.  It is actually a bigger ship that I thought (I had only seen in at a distance).  Ellen and I did some laps on Deck 5 before heading to the room.  We saw the "Soul Sisters" departing the ship prior to our departure from the island.

There was a notice in our rooms that we would get tested for COVID a couple of days from now (I am assuming that the rest of the ship would get tested tomorrow).  This would be our mid-cruise test to see how our protocols were working.

I have an early talk tomorrow before we get to Roseau so I put out the room service form again.

It’s not far to Dominica so I hoping that it will be a smooth and vibration free ride.