I didn’t have to get room service today.  I slept more or less OK – the engine rumble required the use of earplugs and I don’t sleep as well with earplugs.  The time change didn’t help either.

I went to the Windows Café when it opened at 7:30 AM and had my usual waffle and fixings along with a scoop of scrambled eggs (they looked really good and I couldn’t resist).  The breakfast was good as usual but the weather outside looked dismal (cloudy and rainy).  I did get a shot of the coast of Hispaniola from the back deck. 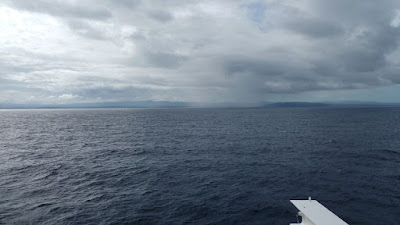 Today I have the 10 AM slot in the Cabaret Lounge for “Forensics and History: The Mystery of the Romanovs”.  I was both shocked and pleased at the good turnout – over 100 people (based on a 350 or so capacity).  The talk ran 48 minutes and was followed by the Future Cruise Presentation.

We went up to the Windows Café to make sure we had a patio seat for lunch. I ordered the Tuna Spinach Wrap well done and it was very good except that, as the cruise goes along, the green chili sauce (or something like that) gets spicier and spicier.  Today, the sauce was almost mouth numbing spicy – I was also only able to finish half of my wrap because there was simply too much food.  Because it is Christmas, the officers are doing the serving today.  Tanya is in charge of the gelato stand; she was singing Christmas songs while she was standing there and even did a duet with a passenger ("O Holy Night", of course).  I didn’t see the captain behind the counter but many of the other stripes were there.  Gita from the Concierge Desk was working the salad bar.  Before, we left for Deck 5, I got yet another iconic Ellen railing photo. 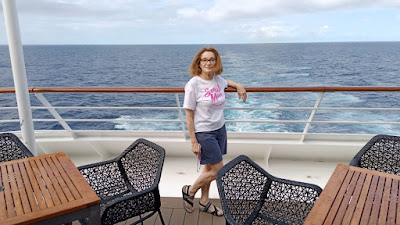 I started my other Lee Child book, “Without Fail” and hoped that I hadn’t already read it.  The problem with Jack Reacher books is that they all have similar elements and so things feel familiar.  After a few chapters, it became apparent that I had somehow missed this book as I sent through the series.  It’s from the library so I have several more days to finish it.

We decided to eat the special Christmas Dinner on the back deck of the Oceanview Café rather than hassle with the Dining Room. 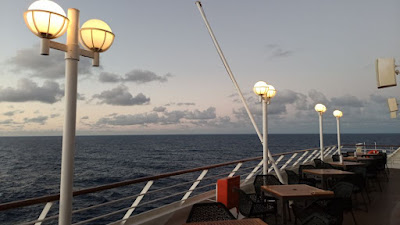 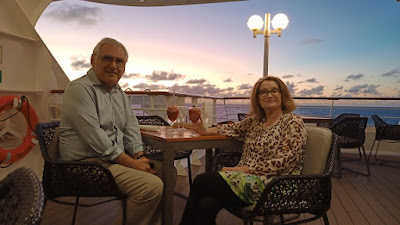 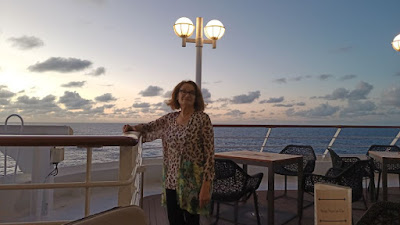 We started off with Frozen Sangrias, a drink I never heard of.  I liked it but Ellen did not. The officers were back to serve this meal as well.  I had the Mushroom Ricotta Cheese Ravioli along with a Beets and Feta cheese appetizer.  They were both good (again, the pasta was molto al dente) but I actually like the beets better.  Along with the meal, I had two hot crossed buns which were very good). Desserts were special tonight with several Yule Log based cakes and something called a Dutch Donut.  I especially liked the dessert breads with dried fruit – kind of a dispersed fruit cake.  Best of all, the dinner was peaceful and calm and the back deck with loaming skies and stars and planets provided a perfect backdrop.  Here's a shot of Venus, joining us again. 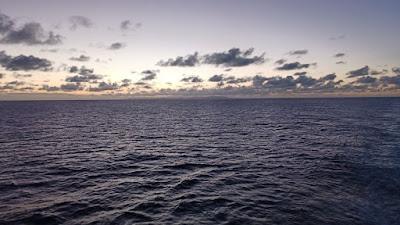 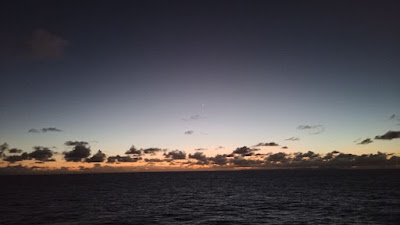 We went to the Cabaret Lounge at our usual time and the place was already pretty full.  We were lucky to get two high seats in the back.  Social distancing went out the window as people were packed in.  There were two Christmas Shows scheduled for tonight, but it looked like nearly the whole ship was at the first one. 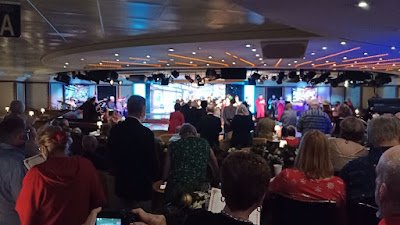 Caroling books were handed out and I thought that this was going to be a sing-along.  The “Signature Dancers” did a dance routine to “Jingle Bell Rock” (not nearly what the QM2 dancers do during that Christmas Cruise). The audience and the officers choir along with Tanya and Danny sang a few secular songs and then the actual show began.  Tanya did her “O Holy Night” accompanied by Violinist Jakub, and Justin read a parody of “The Night Before Christmas”.  We felt uncomfortable in the people-dense environment so we stayed for one more song, “All I Want for Christmas” sung by Lisa.  She did an absolutely wonderful job.  We left after that to put some space between us and other passengers.

We paid another visit to Guest Services in an effort to remedy the temperature control in our Cabin – I am not sure the thermostat actually works since moving the temperature does not turn anything on (like in Cabin 4014).  When we got back to the room, the room was cooler (it had been very hot) so maybe the tech came and fixed it.

The ship is still whipping along at 17 kts so the room is vibrating to the beat of all four engines.  Earplugs again.