December 21, 2021 (12/21/21 all ones and twos) - shortest day of the year - Winter Solstice, and the first day of Winter.  No matter, we are in the constant warmth of the Caribbean.  Today, we are sailing just off the coast of Hispaniola (bottom photo in the haze). 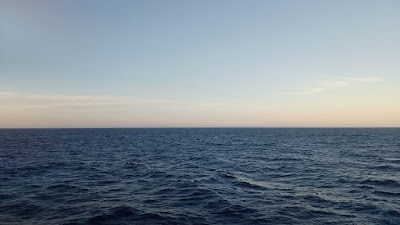 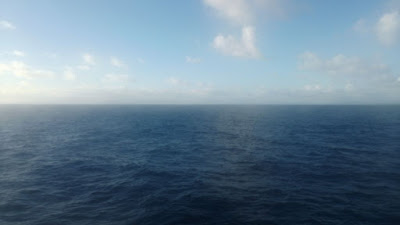 Because of the late start time of my talk today, I can actually have a leisurely breakfast in the Ocean View Café.  Below, my cottage cheese and jams await the arrival of my waffle and sour cream. 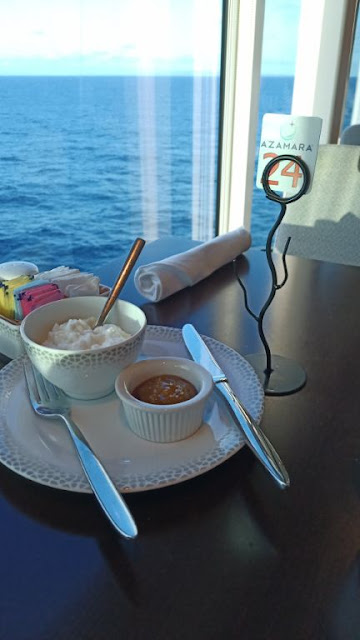 Later in the morning, I even had time to grab an Iced Decaf Mocha in the Mosaic Café and review some of the slides.

My fifth presentation today was at 11:00 AM – “Forensics and History: Search for the Unknown Titanic Child”.  At 10 AM, there was a presentation about how the ship works put on by the officers and engineers.  When I got to the theater at 10:45 AM, there were pieces ship equipment all over the theater.  There was a zodiac on the stage and gears and pistons on the floor.  The chairs were all moved to make room for the goodies. 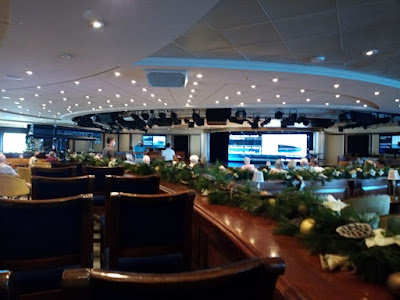 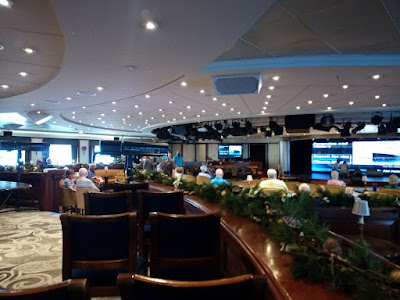 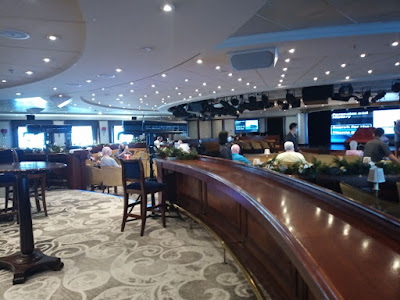 The crew tried to clear away the items (the last to go was the zodiac) as fast as they could and I finally got to set up at near the start time. Attendance this morning was about 40 attendees. 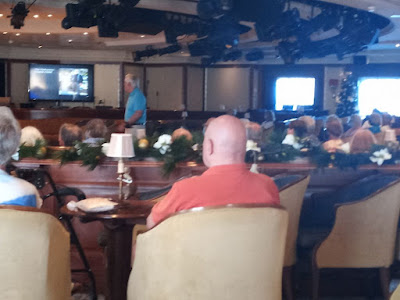 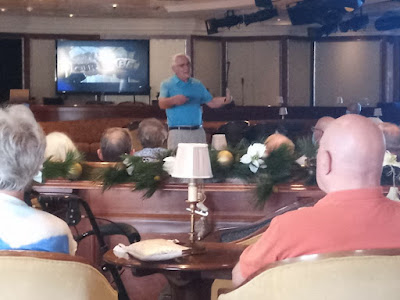 To put this attendance in perspective - that was 10 percent of the guests.  If we were on a 3000 guest ship, the attendance might be around 300 and I would be totally pleased with that turnout. It's a numbers game.  Finished at 47 minutes despite the late and harried start.

We had a quick lunch upstairs and then went to the 1:00 PM Matinee show in the Cabaret Lounge, “On Broadway”, featuring the lead singers Calvin and Lisa Louise along with Danny and Tanya. Justin, the Activity Manager (and DJ) also joined the cast for this concert. 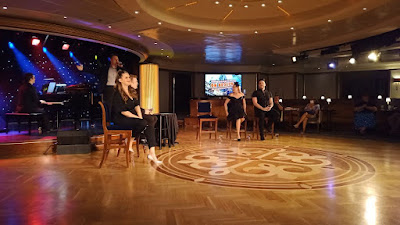 The concert was excellent – I’m going to say one of the best if not the best Cabaret Concert we have ever seen on ships (and that includes those on Crystal).

Some highlights:  Danny sang “The Stars” from Les Miserables (a wonderful version). 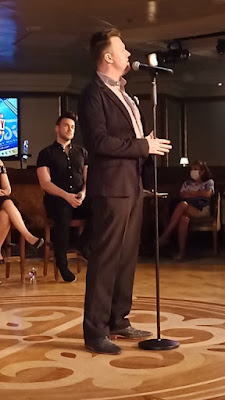 Lisa sang “Meadowlark” from "The Baker's Wife" and did a better job than Sarah Brightman does on her CD. 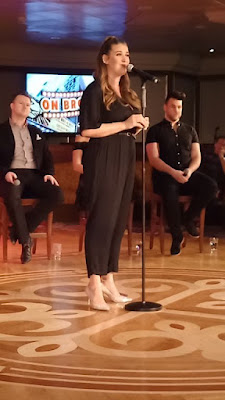 Justin sang “Too Many Tomorrows” from “Sweet Charity” in a surprising opera voice. 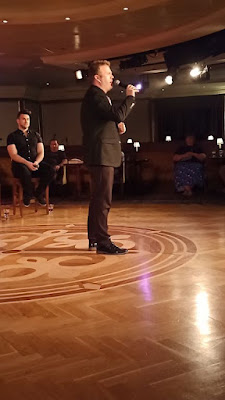 Lisa and Duncan sang “As Long as You’re Mine” from Wicked, one of my favorite numbers from the play. 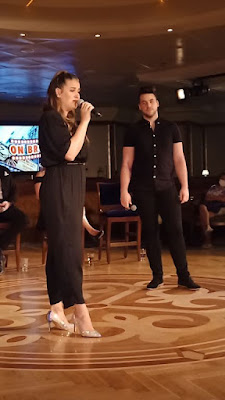 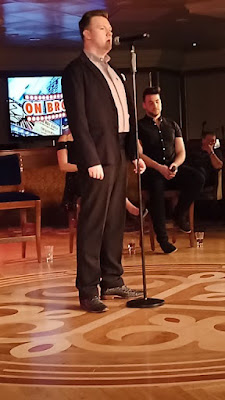 Tanya did an earlier duet with Lisa from "Wicked"; then she came back with a song called “Ice Cream” from “She Loves Me”. 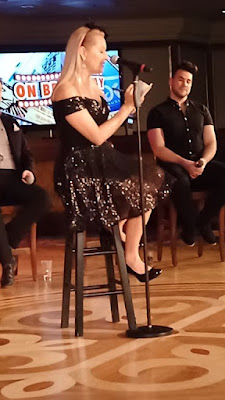 The finale was a group rendition of “Seasons of Love” done absolutely perfectly. 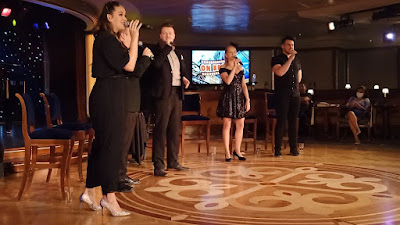 I felt the audience underappreciated the performance (based on the hushed applause and rapid exit of some of the guests).  Maybe the audience just wasn’t into Broadway ballads.

We had a little time out on the open deck during which time I took this "masked iconic" photo. 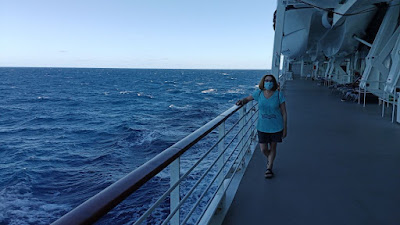 Dinner was once again the Discoveries Restaurant.  Wrapped Zucchini with basil lemon ricotta appetizer (odd but OK), Greek Salad (always tasty). I had the standard Salmon and baked potato along with very good creamed spinach.  Ellen had pan seared Sole (hold the mussels) which she really liked.  The dinner was very good and the service was quick and efficient.

After dinner we saw Sasha and Dima’s Second Show, “Dancing Through the Life”.  They again did a very nice job finishing up with a video featuring some of their students (kids and teens) back in Ukraine (along with some nice scenic shots of Kyiv). Sasha gave a little talk about her background. 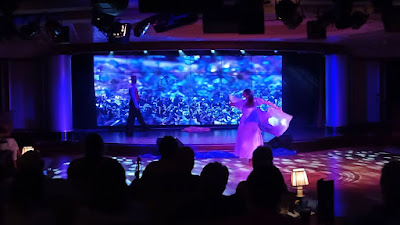 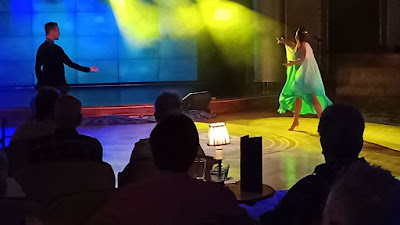 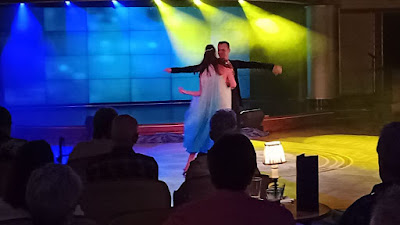 Went back to the room to stretch out those discs and relax.

Clocks move back one hour to put us on EST – Miami Time.