We both slept Ok – the room turned out to be comfortable and quiet.  We are in the second unit from the end on the second floor.  There were no people walking up and down outside our room at all.  Perhaps, the units on either side of us are unoccupied, and the elevators are in the other direction. Always, a bonus.

I went down for breakfast, which was served from 7:00 AM to 10 AM (I think).  The grounds looked nice and peaceful this early in the morning. 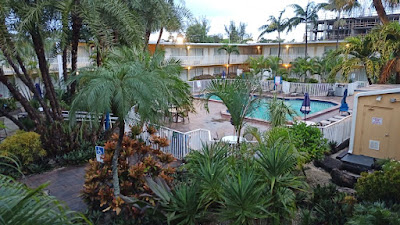 I got a booth far away from everyone because, again, mask compliance (despite a sign on each door) was “voluntary”.  I got in line for the only waffle maker (the kid that was monitoring the breakfast said they used to have two but one broke and hadn’t been replaced).  I did get my waffle along with some cereal and milk and some scrambled eggs.  The eggs were dispensed by that kid and looked like real scrambled eggs – maybe they were prepared in the restaurant kitchen.  The waffle and eggs were pretty good – missing was something sweet – maybe a muffin or sweet roll.  In any event, the breakfast was acceptable.

Ellen went down for breakfast after I got back to the room.

Needless to say, it was a zoo around 10:45 AM, when we went to the lobby to catch our airport shuttle.  There were people going to the cruise port to catch various ships and there were some folks, like us, headed to FLL for their flight home.  Ellen is very good at “negotiating” these kinds of things and she talked to one of the drivers who included us in his next run to FLL.

It's only a 20 minute ride to FLL.  Bag checking at the curb is not free at FLL (maybe $5 a bag) but the bag check-in process at the kiosks was very straightforward and simple.  We printed new boarding passes and baggage tags, tagged our bags, dropped them off, and we were off to security.  There was no one in line for TSA precheck so that took basically no time at all and we were off to our gate, E1.  Our plane, a 737-800 (AA2396) which had come in from Chicago, was already there waiting for us. 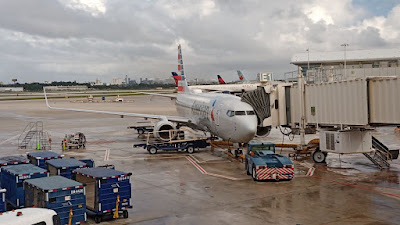 We had over an hour before our 1:35 PM boarding time so we went looking for something to eat.  Our concourse did not have any restaurants or food stores so we went to the neighboring concourse where we picked up passable tuna sandwiches, chips, and drinks (for a kingly sum).  We ate them at our seats at the gate.

We boarded on time (even though people from all groups rushed the line before their turn).  I could tell the AA desk agent was annoyed but there was nothing she could have done.  We had the same bulkhead seats on this flight (8B/8C) which gave us the legroom and physical distancing.  There were some huge bags being stuffed into the overhead compartments but the flight attendants got it all worked out and we pushed right on time at 2:04PM.

There was a lot of weather activity in the area so the pilot told the flight attendants to stay seated during climb out.  The pilot actually did a great job of maneuvering around the clouds and the takeoff was pretty smooth.  I should mention that this plane had no seat-back screens and that all the in-flight entertainment is accessed via the AA Mobile App.  I actually used the app to watch a few minutes of a football game.  Maybe next time, I'll give a movie a shot (there were some good ones on the list).  The flight itself, about three hours, was also pretty smooth with only a brief period or two of mild chop.  I was able to get to the rear washrooms with no trouble despite the fact that most passengers’ feet were blocking the aisle.  There were no incidents on this flight and the flight attendants were all friendly and pleasant. We snacked on some baked goods we had taken from the ship and along with the cookies supplied by the airline, that would be enough to get us to Chicago.

The plane used a different vector to ORD this flight. It didn't cut across the tip of the Lake near Gary but flew over Chicago and over the lake and then made a big turn that took it over Evanston and straight into the airport.  We landed on time, got our bags, and waited for our American Taxi to arrive.  It was about 40 degrees colder in Chicago than in Florida so we waited inside by the window at 3G.  He showed up - automated texts kept us informed on his location - and this time he was masked.  We went to Dova’s house for dinner before Amelia gave us a ride home.  It was a nice ending to two very nice cruises.

We had survived our first pandemic era cruises.