Could have used a little more sleep but at 10:30 AM, our van took us and several fellow passengers to the Port Everglades Cruise Port. (Memo to Al Gore:  It was about 10 degrees cooler than normal in South Florida this week). It took no time at all to get signed in (dealt with the Port Coordinator who had no one in line).  We are in the Library now waiting for our room to be ready.  It looks like Ian Creswell, the Activities Director, is on this ship (he and I worked together on the Solstice Mediterranean cruise).  The Equinox and Solstice are twin ships so we pretty much know our way around.

On this cruise, we are “behind the door”, cruise ship talk for having a cabin on the other side of the door that separates passengers from crew.  Our cabin, 3521, is the first cabin behind the door.  It is a just like the regular passenger cabins except for a tiny but workable bathroom 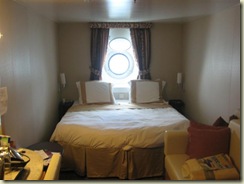 We skipped lunch and had very little for dinner.  We checked out the ship – one of the neatest places on Equinox type ships is the Solarium (enclosed – adults only) area 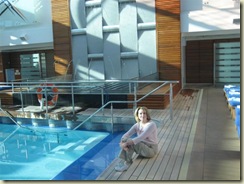 Ellen in the Equinox Solarium

The Lifeboat Drill at 4:15 PM sent us to the Symphony Dining Room (our muster station) where we sat with one other couple (I found out later that it was the other speaker on board) 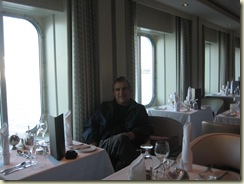 There was no letter from the Cruise staff concerning my lectures so I called Guest Relations and spoke to Ian Creswell, who wanted to meet at 9:45 PM in the Disco.  I had worked with Ian before on the Solstice in the Mediterranean and it was a lot of fun.

The Welcome Aboard show featured an A Capella Group (These Guys) and a “Popera” Singer who was very entertaining.  After the show,  I met with Ian, who told me that I would be doing five talks – two on port days – we’ll see how that turns out.  The other speaker on board is Denny Whitford, an oceanographer.  What Ian did not tell me was that we would be filming a promo for the talks – I was still wearing what I boarded the ship with and I hadn’t shaved or even combed my hair.  Before I knew it, we were in front of the cameras.  I was not able to find that promo on the TV so I hope they never show it.  Our bags arrived pretty late in the evening – one less thing to worry about.

Lights out early – still tired from the trip here.