Our last day at sea and it is a beautiful one – barely a cloudy in the sky.  The temperature is in the mid 70s and there is no breeze to speak of – the seas are calm.

Breakfast today in the buffet – by the way, my standard breakfast for almost the entire cruise:  Oatmeal, waffle with cottage cheese, blueberry compote, and whipped cream.  Predictably good. 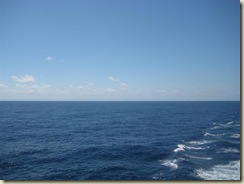 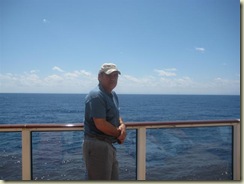 My final talk - “Forensic Science:  Novel DNA Testing” is at 3:00 PM in Celebrity Central.  The audience should be OK since I was told the evening before that the Trivia Challenge would not compete directly with me but would be an hour later.  Two couples indicated they would be at the talk.  Trivia is probably a big thing on the ship but we haven’t played even once.

As always, I arrived early to make sure that everything worked OK.  I had also heard that a passenger in a wheelchair (from the UK) was a big fan – her caretaker had told Ellen earlier in the cruise that she really wanted to meet me.  She came early and I spent a few minutes with her discussing the CSI shows.  She is indeed a big fan and watches all of the shows including NCIS and House.  I asked her to give “Bones” a look and told her she would find it amusing.  A very nice chat.  By the way, she made all of the talks.

The last talk was well attended – more than 200 people – and went well.  I thanked the audience for their loyalty and attendance at my talks.  A number of passengers stopped by afterwards to indicate they had loved the presentation series.

Ellen had done a lot of packing during the day so we could attend the farewell show tonight.  We also decided not to walk off with our bags – we would place them in the hall (but on the other side of the crew door so they would be picked up).

The Farewell Show involved These Guys and Greg London and was entertaining – Greg sang in his own voice – I wish more impressionists would do that since they usually have great voices.  They played the DVD of the cruise and again we failed to get into the video on both of our cruises.  I guess we just don’t do the activities that make it to the cruise DVD.

After the show, we went to our final set at Michael’s Club.  We gave Alexandra a tip for her service for the week (we only had ice water the whole time).  We said goodbye to Max and called it a night.  We had an early wakeup call for the morning.