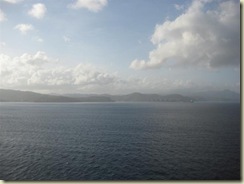 Wakeup Call, breakfast buffet, and we are set for our morning tour: “The Island’s Delights” – a full day including lunch.  The Equinox is docked across the harbor from the city next to a shopping mall.  The last time we were here, we docked next to the terminal and could walk right off the ship and into Castries. 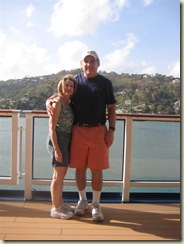 Looking good with Castries in background

At 9:30 AM, we are on our way.  The obligatory first stop is at a lookout point so we can catch a view of the Equinox in the harbor 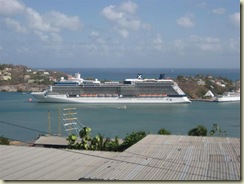 Castries is not a big town so soon we are in the country side traveling the west or Caribbean side of the island.  We are in a nice small van and we are sitting separately in single seats.

Our first stop is a photo op of Marigot Bay, a small but very picturesque cove 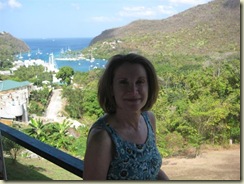 Ellen with Marigot Bay in the distance

dotted with small boats.  The tour went inland through the Cul De Sac Valley, where the huge Hess Crude Oil Storage facility is located (the oil from Saudi Arabia is brought to St. Croix to be refined) and then stored on St. Lucia.  The valley also contains numerous banana plantations (bananas being a major export item). 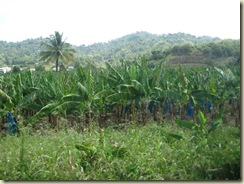 Moving from the valley, the bus started its climb over the mountains to the first of several fishing villages.  The village, Anse la Raye, is named for the Rays that are caught in this fishing village.  We stopped for some shopping but wound up buying nothing due to the high prices these vendors were charging.

We then passed through another village, Canaries, named for a crude cooking pot (it uses charcoal – a type of hibachi) used by the folks in the area.  At this point, we were able to get our first look at the famous Pitons. 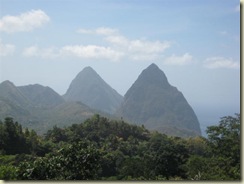 The two volcanic peaks are both over 2000 feet tall – the Petit Piton is 2437 feet tall and  the Gros Piton tops off at 2530 feet.  The Pitons are part of a World Heritage Site.  The van stopped for another view of the Pitons 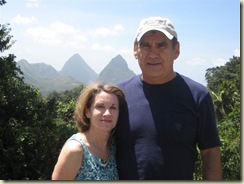 You can tell that it was pretty warm that day but it was nice to be able to sweat (someplace other than the gym).

The van continued to the village of Soufriere but did not stop – the actual destination was the Sulfur Springs Volcano.  Billed as a “Drive Thru Volcano”, this caldera was left over from an eruption far in the past.  St. Lucia is a volcanic island (the Pitons are volcanic lava protrusions).  Sulfur Springs is an area full of bubbling mud pools emitting hydrogen sulfide and volcanic rock.  It is pretty striking 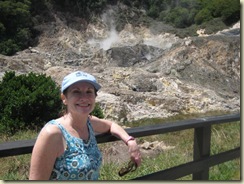 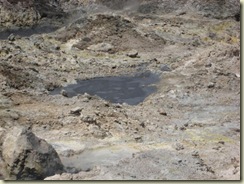 We had a very small guided tour of the Volcano and a very brief visit to the gift shop.  The next stop was the Sulfur Springs Botanical Gardens 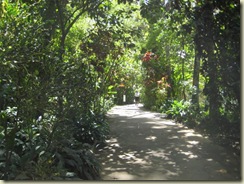 Our tour guide conducted the tour through the gardens identifying various plants along way (she seemed pretty knowledgeable).  Two very interesting plants caught our interest.  The first, the Torch Plant, 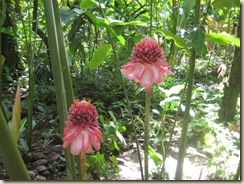 You can look but not touch this plant – touch it with your finger and it dies.

The second plant was the Philodendron – a plant we have at home.  The difference here (and on some of the other West Indies islands) is that the Philodendron seems to be a parasitic or symbiotic plant wrapping itself around other trees 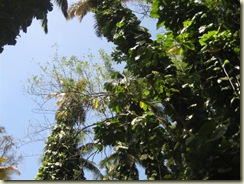 Philodendrons wrapped around a tree 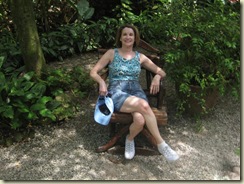 Lunch was included in this tour but it was already around 1:30 PM and folks were hungry.  The last stop was at a restaurant in Soufriere for a Creole Buffet Lunch.  We sampled the fish (supposedly Snapper), the breadfruit and cooked bananas, and coleslaw.  There wasn’t much to drink (water – not sure about – and grapefruit juice diluted in water).  The fish wasn’t bad but breadfruit is an acquired taste that will take me a long time to acquire. 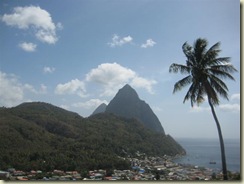 Gros and Petit Pitons from the restaurant

Soon, we were headed home.  The trip took a while as we backtracked the way we had come.  Even though we were pretty tired and a little car sick (me) from the long and bumpy ride, we did get ourselves together for dinner and the evening’s entertainment.

Greg Bonham, a Las Vegas style performer (and a dead ringer for Dustin Hoffman) was the headliner tonight.  His show was great with his closing number being his own composition of “Who Will Stand for Freedom”.  It brought down the house.

A long but nice day.