Roatan is one of the Bay Islands, just off the coast of Honduras.  It is a tiny island measuring 37 by 5 miles with a population of about 30,000.  We have been here a few times in the past and the pier used to lead from the ship directly to the little town.  The pier has had some major upgrades.  Diamonds International and the other retailers are now housed in a very nice new Shopping Center walking distance from the pier. 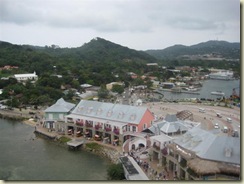 There must be another pier on the other side of the island since another cruise ship is visible from the Equinox. 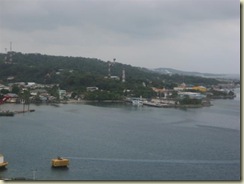 We are not on tour today – we have an early departure and I have a talk later today.  It is a short walk to the town and I recall from our last trip that there is an internet store nearby.  Our our way, we check out the Shopping Center and manage to get our picture taken together. 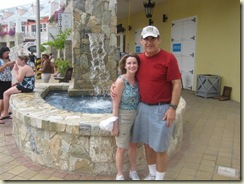 Checking out the stone work at the Shopping Center 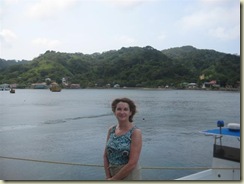 Our lady of the sea

We did find the Internet store ($2 for 30 minutes).  It was a little warm inside but the connection was fast so we could catch up with our e-mails and bring everyone up to date.  We looked at a number of the vendors but decided to go back to the ship for lunch.  We planned to go back to the Internet Place after lunch to check if we received any responses.

That’s exactly what we did – a tuna sandwich, ice teas, and some sorbet for lunch and then back to the town.  When we got there, we were told that the servers were down – they came back on in about five minutes and we checked our mail and caught up with a little news.  We wound up not buying anything and headed back to the Equinox ahead of the 3:45 PM All Aboard.

Today’s talk - “DNA Testing: Solving History’s Mysteries” is back at Celebrity Central at 4:30 PM.  It is another good crowd (200 plus) considering the talk was competing with the Helipad Sail Away at 4:00 PM (If I weren’t speaking, I might have gone there myself). Also, attendance is usually less on port days.

The talk went well – I think the attendees appreciated the Copernicus and “Earthquake” McGovern sections.  Also, a passenger had asked me at the last talk if I would be speaking about Thomas Jefferson – I had originally dropped that section for the Copernicus story but put it back in for her.  She met me afterwards and thanked me for the Jefferson segment.

An old friend was docked just off the Equinox’s starboard side – the NCL Jewel.  The Jewel is dwarfed by the Equinox. 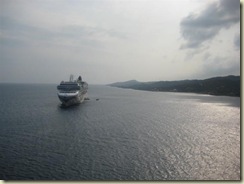 NCL Jewel anchored near the Equinox

After Dinner, we passed by Celebrity Central and noted the sign announcing my talk earlier in the day.  My name in lights… 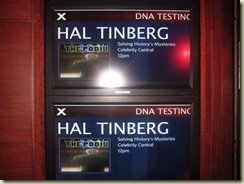 Tonight was the final production show - “Limelight”.  I liked the show just as much the second time around.