\First time in St. Kitts (short for St. Christopher, I believe) – 317 nautical miles from Barbados).  Another beautiful day.  St. Kitts and Nevis make up one of the UK commonwealth countries.  (Yes, they drive on the left side of the road like many of the other islands). 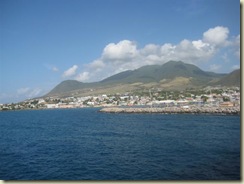 St. Kitts (Basseterre) from the ship 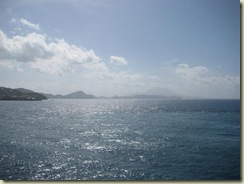 Today, we are tour again - “Essential St. Kitts” – a short afternoon tour, which works out well since I am scheduled for talk number 4 this afternoon.  The tour took us briefly through Basseterre (pronounced “bahss-teer”) and then out along the Caribbean Coast.  The bus passes a number of small fishing villages arriving at a scenic lookout 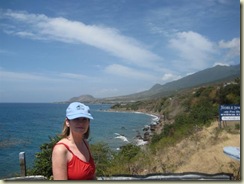 Our destination is Brimstone Hill Fortress National Park.  Brimstone is a restored fortress originally designed to protect the island.  It was built by slave labor and today it is National Park.  It was declared a UNESCO World Heritage Site in 1999.  The bus made its way up the windy road (I believe only one bus can get up there at a time).

The park has a small deli and a visitor’s center – otherwise, you are free to roam the grounds.  It was pretty warm so Ellen stayed behind while I scaled the steps to the Citadel, the highest spot on the grounds.  It was a tough walk only because the wind was directly in my face (like holding your head outside a speeding car). 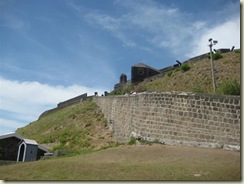 The long walk up 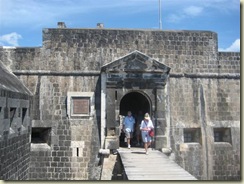 The Citadel at Brimstone Hill Fortress

The Citadel contains a courtyard looking into several rooms once used by the soldiers stationed here. It also has a number of cannons aimed out over the Caribbean. From the top, you can see everything including a nearby island. 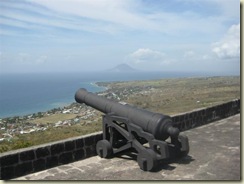 Cannons and Island in the distance 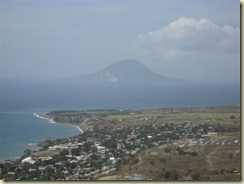 Looking back down toward the visitor’s center, I played “Where’s Ellen?” – Can you spot her? 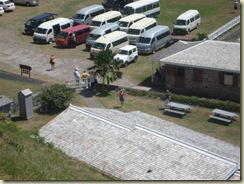 Being hot and humid, it was time to try one of the local beers – this time is was Caribe (named after the indigenous people decimated by the Spanish Explorers) 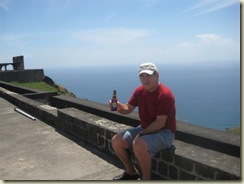 Beating the heat with Caribe Beer

After the bus barely squeezed through the archway out of the Brimstone National Park, we drove a little inland to the Romney Manor.  Romney Manor was originally owned by Samuel Jefferson, the great great great grandfather of Thomas Jefferson, and run as a sugar plantation. 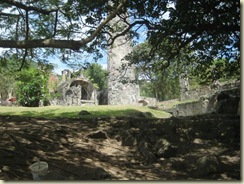 Today, it consists of beautiful grounds and a showplace for native fabric manufacture (Batik).  One special tree is the Saman Tree, which is 350 years old. 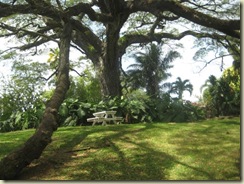 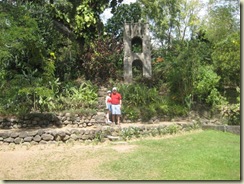 Romney Manor is also home to Caribelle Batik, a company that specializes in unique designs and a time tested method of dyeing cotton. 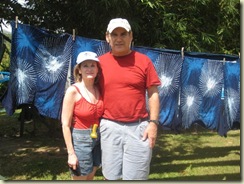 This was the last stop and the bus headed back to the pier.  It was an interesting and picturesque excursion.

Talk number 4 - “DNA Testing:  Secrets of the Royal Families” was scheduled at 4:30 PM in Celebrity Central.  Since the ship pushed at 4:00 PM, this time slot didn’t give people much time to get back on the ship, get cleaned up, and into the talk.  When I arrived, there were just about 10 people.  By the time the talk started, about 175 attendees filled the place.  The talk went well – the audience was engaged.

After the talk, off to dinner at the Silhouette Dining Room.  We caught Max later in the evening.