Cozumel (“Land of the Swallows” in Mayan) is an island only 12 miles from the mainland and 36 miles from Cancun.  No tours for us today since most of the excursions are water sports related.  We generally walk through the town and do some shopping.

The weather and location will not cooperate today… 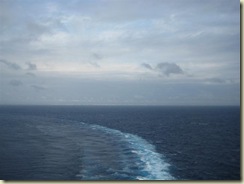 Mainland Mexico as we approach Cozumel 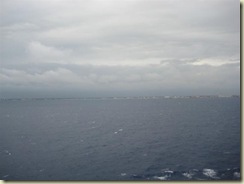 Complicating our plans, the Equinox is not docked at the town pier but instead some 30 minutes walking time from downtown.  We have never docked here in our many times to the island.  Always looking for a new experience.  The Equinox is not the only cruise ship here today; docked or anchored (poor folks that have to tender to shore) are at least three other ships – Carnival Imagination, Carnival Legend, and Crown Princess.

Thinking it wasn’t going to be that cold and rainy, we both started out in relatively light clothes.  We didn’t get 100 yards down the pier when we (well, Ellen) realized it was that cold and rainy and we needed some warmer clothes.  I went to the shopping center near the pier and Ellen went back to the ship to change.  Fortunately, she didn’t pay any attention to me and brought me a windbreaker. 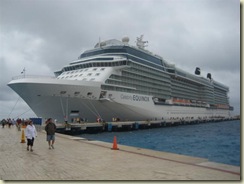 Thinking that this might be a good day to find a day spa and get some treatments, we walked over to the El Cid Hotel located next to the pier shopping center.  We did find the Spa – which looked very nice – but decided not to spend the time – maybe next time.

We did find out that there was an internet store about a block away so we took the opportunity to catch up with the kids.  The price was right ($2.00 for 30 minutes).  We tried to walk a bit to see what the area was like but it was simply too cold and wet.  We did manage to get some good shots of the ships visiting today. 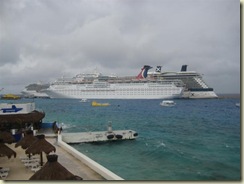 Carnival Imagination and the Equinox 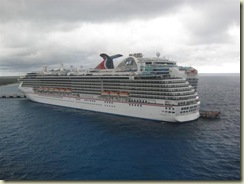 After a few minutes, we headed back to the ship to dry off and have some lunch.

On board, we could feel the buffeting of the wind.  This was probably the only time we felt the ship move and it was docked.

The main town of San Miguel was visible on the horizon across the deck of our neighbor, the Carnival Imagination. 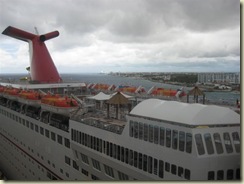 San Miguel in the distance

The afternoon was spent in the Solarium.  I was updating my final talk and Ellen was reading.  Eventually, the sun did make an appearance and the sea settled down but most of the day was gone.  At least, the sail away would be smoother now.

David and Joan Dubov, from Florida, and attendees at my presentations had invited us to dinner tonight at the Tuscan Grill, one of the specialty restaurants on board.  There was an initial concern about the dress code but we were told that the restaurant was smart casual – that’s me.

Dinner was at 6:00 PM but we were also invited to a private concert by Bev from Florida – Bev had won the Celebrity Talent Contest a few nights before – in Michael’s Club at 5:00 PM.  The place was packed with a large Florida contingent traveling together.  Bev sang some great songs – including her winning song, “What I Did for Love”.  There were also some piano instrumentals by her accompanist.  It was very relaxing and enjoyable. 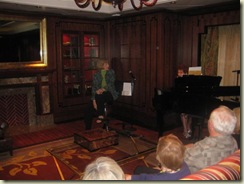 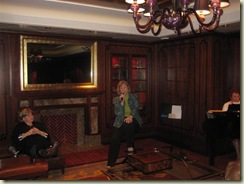 Bev in concert in Michael’s Club

After the concert, we made the very short walk to the Tuscan Grill.  There were six of us at dinner – Bev (singer) and her husband (Sam), Bev (from Libertyville), Bernie (a friend), and the Dubovs.  Ellen had the salmon and I had the eggplant parmigian.  The restaurant had great service and ambiance and the conversation was fun and light.  Dinner took over two hours and we were a bit rushed because we wanted to make the show.

Tonight’s show was the a variety show starring Doug Cameron and Tony Daro, the comedian who caught up with the ship in Roatan.  Doug was very good again.  Tony Daro’s material seemed so familiar that we were sure we had seen him on a previous cruise.  He was funny in a kind of subtle way.  Best line of the night- “You’re not like the 7 PM audience.  They were so rude, applauding and clapping”.

We caught Max after the show (he had given Ellen a signed CD earlier) and watched Alexandra do her signature waitress dance.

A long day and worst of all – our clocks moved forward two hours (going to EDT) this evening.  We called it a day at 1:45 AM EDT.  This should make for an interesting morning…