Our next port of call is Roatan, Honduras – about 650 nautical miles away – but today is another wonderful day at sea.  Calm seas, a little breezy, but warm. 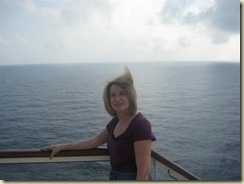 At Sea – it takes work to get that hair just right

I do have a talk scheduled for today but the logistics are a little different.  The talk is earlier at 2:00 PM (good – gives me more time to come down to earth before dinner) but in the Equinox Theater (not Celebrity Central), which is a big place.  Also, the title in the Daily has not been updated and says: “DNA Testing:  Cold Cases Solved”.  I spoke to Ian and asked him to see if Dru could make an announcement correcting the title – I didn’t want people to think we were in reruns already.

Today’s talk is “DNA Testing:  Secrets of the Royal Families”.  I got to the theater at 1:30 PM to make sure that the AV would be OK in this new venue.   Just a few people were there and some were in the balcony.  The AV worked out just fine.  Ian also found a way to get my wheelchair attendees down to the ground level right near the stage (via a special elevator backstage) so they didn’t have to sit at the back of the lower level.  I’m sure that they appreciated that.

At show time, we guesstimated the attendance at over 250 – maybe 275.  I delivered my talk from in front of the stage because I couldn’t see the slides from the stage and I had a little difficulty connecting with such a scattered audience.  I think it worked out OK – based on feedback.  Ian thought having the talk in the theater had turned out to be a benefit since Celebrity Central might have been SRO with his crowd. 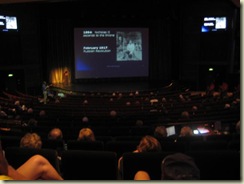 “Secrets of the Royal Families” in the Equinox Theater

After the talk, some downtime at the Solarium and then on to Dinner.

Another nice day at sea…