Another beautiful day in the Caribbean.  We have an afternoon tour today so we spent the morning relaxing (I did some updating of my talks),  The tour today - “Discover Barbados” – is short – just three hours or so and will take us pretty much where our previous tour of Barbados took us.  Still, you need to get off of the ship when you can.

After a brief tour through Bridgetown (and nearby Holetown) with the obligatory pass by of Sandy Lane Resort (and another description of Tiger Wood’s wedding – ironic now).  We head out to the country side and the Atlantic Side (or less desirable side of the island).  Along the way, we stopped at a Rum Bar, which had vendors and some good views.  One such view is the highest point in Barbados 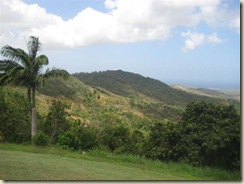 The highest “mountain” in Barbados (Atlantic Ocean in distance)

towering about 1800 feet, I think, above sea level.  This is because, unlike the other islands we had visited, Barbados is not volcanic in origin but rather limestone and coral – hence no mountains.

The Rum Bar had some monkeys for visitors to photograph (opted out) as well as a swing set (yes all bars should have a swing set).  Ellen had to give it a go 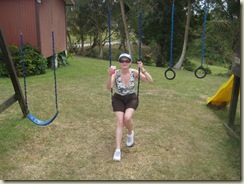 The Atlantic Ocean side, because of the rougher waters, is not as desirable as the tame Caribbean side.  This translates to fewer resorts and less crowded beaches – it is also a surfer delight in spite of the rip tides (warnings were out today).  Our next stop is Bathsheba, a community near the ocean, known for its striking rock formations 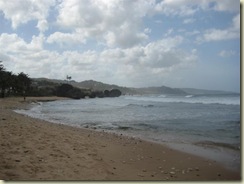 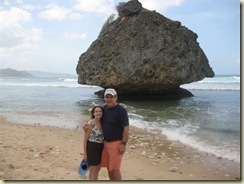 The wind and waves are responsible for these structures.  I suspect that, in time, they will fall over.

The final stop on this tour is St. Johns Church. 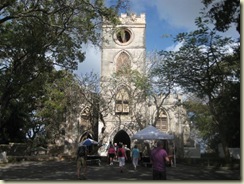 The church was built in 1648, then destroyed by a fire and rebuilt in 1676.  It was then leveled by a hurricane and rededicated in 1836.  Seems like some bad mojo happening here.

From there, we headed back to the ship.

Dinner was in the Silhouette Restaurant.

Tonight is the second production number - “Equinox – the Show” – a Cirque type show we have already seen so we did not attend.  Instead, we took in some other acts around the ship.