After  traveling just over 1230 miles from Ft. Lauderdale, the ship is docked in beautiful St. Maarten – in Philipsburg, the capital of the Dutch side.  St. Maarten (Dutch) and St. Martin (French) share 37 square miles – the smallest island shared by two countries.  The French side is slight larger.  The Equinox is alongside a very pricey yacht, the Polarus 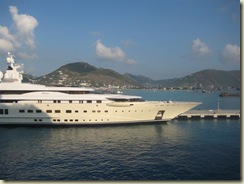 Unable to spot any passengers on the Polarus - only crew members swabbing the decks.  On the other side is our traveling companion, the Serenade of the Seas. 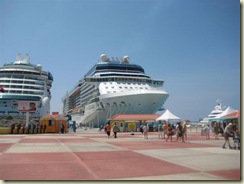 The Equinox and Serenade of the Seas 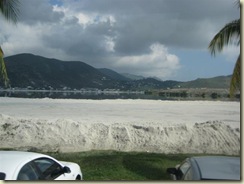 The island used to be in the salt business hundreds of years ago but now the ponds just sit there – there are many salt ponds on the island.

As the tour moved along, I spotted a very unusual set of flags on a hill 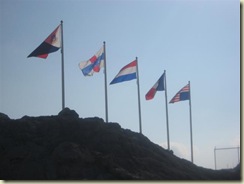 The US Flag on the fight is upside down – I believe that is a kind of SOS signal. 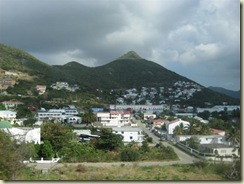 Our next stop is at the International Overlook.  It is so named because you are supposed to be able to see neighboring islands (not today because of the haze).  We did see Simpson Bay – the largest saltwater harbor is the Eastern Caribbean 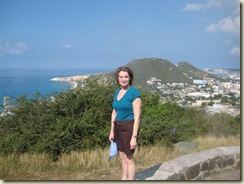 Ellen – Simpson Bay in the background (right and below) 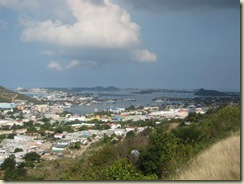 We stop at Marigot, the French Capitol, for a 45 minutes shopping run.  There is some French spoken but everyone speaks English on the island.

Near the city, the remains of a French Fort are visible. 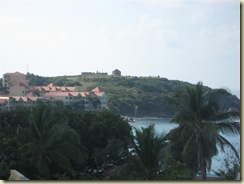 It is a short tour and soon we are back on board.

My third talk - “CSI: Cold Cases Solved” – is at 4:30 PM just after the ship is scheduled to push.  Because this is a port day, I am not expecting a large crowd since people will be tired.  At 4:10, there are only about 10 people in Celebrity Central.  By 4:30 PM, about 200 people are present – remarkable for this time slot.  (a note:  the tech helping me set up specifically asked to run my talk because he is a fan and wanted to attend).  The talk went well and I received a lot of positive comments from the attendees.  I also inquired as to why the talks were not available of the TV (ON Demand).  It was an oversight and the shows are not available in the rooms for those who cannot attend in person.

Dinner in the Silhouette Dining Room was one of the best on any of our cruises – a pasta with mushrooms and goat cheese – fantastic.

The show was also fantastic – Greg Bonham – an Aussie from Las Vegas – total entertainment – great voice and showmanship.  He finished his set off with a wonderful inspirational song - “Who Will Stand for Freedom” – that had the whole place standing and singing.  One of the best acts we have seen on a cruise ship.