March 6: The weather is nice – the seas continue to be smooth. 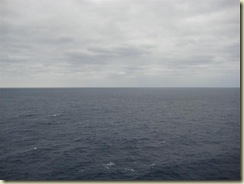 We spent most of the time in the Solarium – the air conditioned adult pool and lounge area. I finally finished a book I picked up at the ship’s library (“Deception Point” by Dan Brown – pre-DaVinci Code).

The ship is running a special brunch today in the Silhouette Dining Room. We had arranged with the Whitfords and the Rebbins (a couple we met on the ship and presentation attendees) to meet at the brunch. There were several stations offering all kinds of food (breakfast and lunch) - I tried the fish and chips which were pretty good. A nice concept and not as crowded as would be expected. It did give us a chance to chat with our new friends.

Talk number 5 - “DNA Testing: Solving History’s Mysteries” (3:00 PM in Celebrity Central) went well and was well attended (about 200 people). People seemed quite interested in the Lemba people and their origins.

This would have been my final talk since I wasn’t scheduled to speak on the final sea day. Since the talks were going well, I had asked Ian if we could fit in a sixth presentation on the final sea day. He got back to me indicating that this would be great. I announced the new talk at today’s talk and everyone seemed very pleased that there would be an additional presentation. So, there will be. 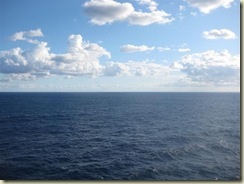 My final talk - “Forensic Science: Novel DNA Testing” is also well attended (this was not my original planned extra talk but I could tell from the audience that they would rather hear this than “DNA Eyewitness”).

Many passengers have expressed positive feedback from the talks – hopefully reflected in positive comments on the passenger feedback cards.

Even though we are returning to Ft. Lauderdale tomorrow, we don’t have to unpack.

The benefit of back to back cruising.

We attend the “Farewell Show” because Karen Grainger, who performed earlier in the cruise, is returning for this show. By the way, she did remember us from the Mediterranean Cruise last July.

Caught some of Max’s set in Michael’s Club.