Another day in paradise – an expensive paradise – but still a paradise. 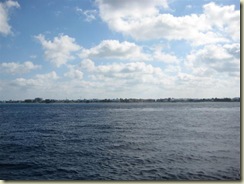 Most of the tours today are ones we have already taken in the past or ones that involve water sports so we are not on tour today.  Instead, our plan is to walk around Georgetown and do some shopping, find an internet care, and maybe a day spa.  The Equinox is anchored and we will be taking tenders to the city.

We are not alone – there are two Carnival Ships and a Disney Ship (we rarely see the Disney ships on our cruises). 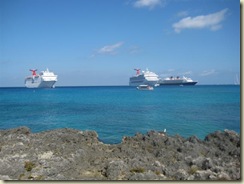 Our cruising companions anchored in the bay

We were unsuccessful in finding a reasonably priced day spa but we did get in some good exercise in our search.  On the way, we did speak to a local who told us that the library just a few blocks away had free internet.  We could tell that we were at the library because the entrance was full of kids using the library’s WIFI.  We managed to get on a terminal and during our allotted 30 minutes (more if no one was waiting) caught up on e-mail, checked the stock market,and got current on some world news.  The place was even air-conditioned so we didn’t emerge all soaked (oh,yes – they had nice washrooms).

George Town was in the midst of some kind of city wide art display involving iguanas (like the Chicago Cows a few years ago).  We found a particularly colorful one willing to take a picture with Ellen. 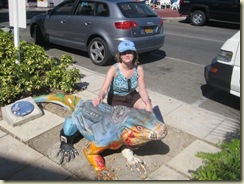 Ellen and the George Town Iguana

We decided to get back to the ship for lunch (Commandment 1: Thou shalt not eat off ship except on excursions with meals).  The Tender pier had iced towels for us and the ride back was smooth and scenic.  I like the tenders because I can usually get a great shot of our anchored ship.  No exception today. 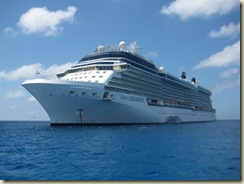 The Celebrity Equinox at anchor

Lunch was at the Ocean View Cafe.  Lunch on both cruises usually consisted of a tuna salad sandwich, some potato salad, guacamole, and a sorbet (usually tropical in origin).

We spent the afternoon in the Solarium (I was working on my talks and Ellen was reading).  All ships need this kind of space for relaxation only.

After dinner in the Silhouette Dining Room, we went to the Equinox Theater to catch a reprise of Greg Bonham.  His show this time around was nearly identical to the one from the first cruise.  Again, he finished with his new song - “Who Will Stand for Freedom”.  This time, the crowd did not get into it as much – no one was standing and clapping.  Still a good show.  After the show, we met with Greg and he promised Ellen a CD as well as a bonus CD of his Freedom song after his final show.

A little bit of Max in Michael’s Club and this day is history.