The Equinox has arrived in Cartagena, Colombia after logging more than 630 nautical miles.  Cartagena is known as Cartagena de Indias (of the West Indies) to differentiate it from its namesake city in Spain (which we visited on our transatlantic cruise).  It is, of course, famous for being the location for the movie, “Romancing the Stone”.  The city has a population of just over a million people. 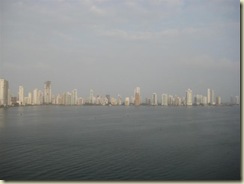 Cartagena from the ship

The ship has docked in a location different from last year (Panama Canal cruise).  There is a new visitor center within walking (or, in this weather, within shuttle) distance from the ship.

The ship departs at 4:00 PM today and all the excursions are early morning.  We did get on the “Panoramic Tour Around the Bay” excursion at 9:15 AM.  A wakeup call, quick breakfast in the Ocean View Cafe, and we are on the pier at 9:00 AM for our tour.

We board a replica of a 17th century Spanish Galleon – the “Bucaner” - for this cruise around the bay. 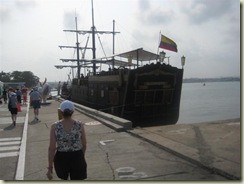 Ellen on her way to our Galleon 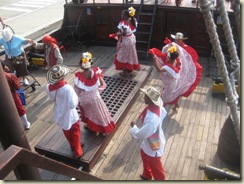 The “Stars of Bucaner” perform

They did a number of dances at the start and finish of the cruise. I thought that they were entertaining and the dances were interesting.

Although it was hot, the ship kept moving so there was a breeze – not so nice was the engine exhaust that wafted across the deck every so often.  I thought we should get moving so I took the helm. 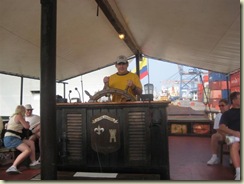 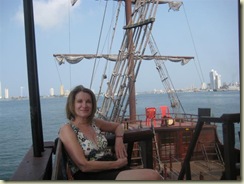 From the Galleon, we could get a good view of the new condos near the bay.  Also visible is a US Naval Ship (unusual since it was painted white and not navy gray).  The guide told us that the US and Colombian Navies carry out a lot of joint operations. 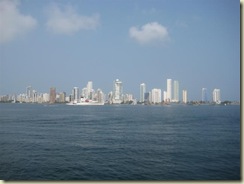 Cartagena Condos and US Navy Ship

The tour continued to the Old City.  Visible from the water was the Church of San Pedro Claver and docked at the pier was another historical Spanish ship (this was something a bit more than a Galleon). 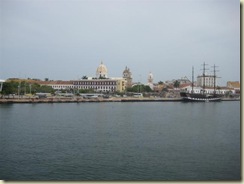 We had visited the monastery, La Popa, the last time we were here.  Now, we had a good look at it from the bay.  The hill on which La Popa is situated in the highest point in the city at only 420 feet. 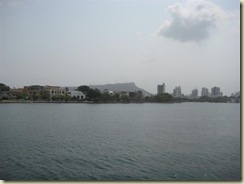 We also got a very nice view of Fort San Felipe de Barajas, which we toured in the past – this time we did not have to climb all those stairs in the heat.  San Felipe is the largest Spanish Fort in the New World. 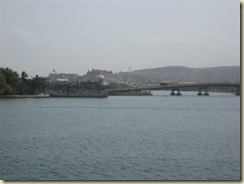 The ride back was very slow – the boat was almost idling as the guide described some facts about Cartagena and Colombia.  With the ship moving so slowly, the heat became an issue.  We did get a fine view of the Equinox in the distance.  In front of our ship was a statue of the Virgin of Carmen, whose placement in the bay is to protect the city. 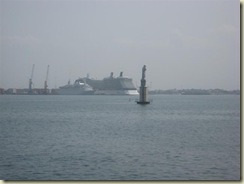 The Celebrity Equinox and the Virgin of Carmen 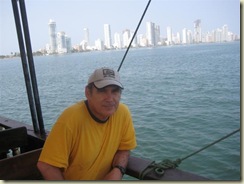 Just relaxing in the heat on the way back

We stopped at the new visitor’s center after the tour to check out souvenirs.  It is a nice place and the prices were reasonable.  I did manage to pick up a “Cartagena de Indias Cruise Terminal” cap – you won’t find many of those in Libertyville.  We did find out that there was WIFI (no computers) available in the area outside the visitor’s center.

Back to the ship to get lunch and stop sweating and then back to the Center to get on their WIFI.  We purchased 30 minutes of connect time for $2.00.  Every table was occupied with mostly young folks with their laptop computers.  We did manage to find a table that we eventually would up sharing with an older couple from the other ship in town – the Olsen “Black Watch”.  Typing and sweating occurred simultaneously as we checked our e-mails and caught up with everyone back home.  We wound up chatting a bit with the couple from the Black Watch – they shared their opinion of their on-board lecturers.  As we headed back to the ship, I couldn’t pass up this photo op. 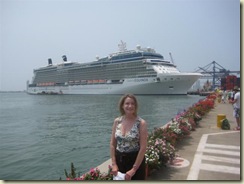 I had just a little time to relax before my scheduled talk today.  Again, this is one of those post-departure talks.  Talk number 3 - “DNA Testing:  Cold Cases Solved” is at 4:30 PM in Celebrity Central.  Passengers need to be on board by 3:45 PM so that gives them a little time to grab their iced teas and head to the theater.

Again, the turnout is surprisingly good (about 200 people) and this lecture is well received – people love cold cases – especially those that are solved.

Dinner in the Dining Room, show in the Theater, and a little smooth jazz from Max rounded out the evening.